A small village in Iraqi Kurdistan has become a flashpoint for tensions between the ruling Kurdistan Democratic Party and its rival, the Patriotic Union of Kurdistan, with the PKK also entering the dispute. 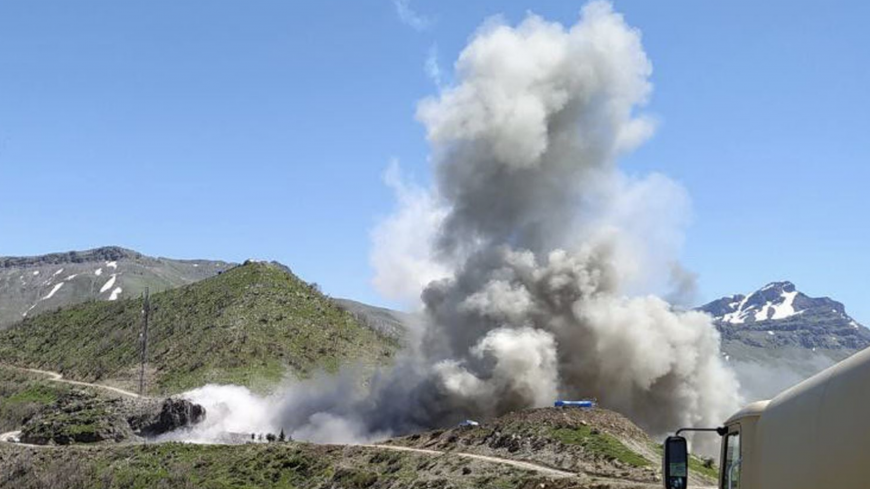 “Brakuji” is the curse of the Kurds. The Kurdish word for fratricide is also used by Kurds to define the Iraqi-Kurdish civil war in the 1990s. The yearslong conflict between three major Kurdish actors in Iraqi Kurdistan is a black stain in Kurdish history. Today, escalating tensions among those actors over a small northern Iraqi town have revived memories of the civil war, calling to mind the oath of the Kurdistan Democratic Party’s leader, Massoud Barzani: “I will never allow another Brakuji.”

In-house tensions are mounting over the town of Zini Werte, west of Mount Qandil, which is home to the headquarters of the Kurdistan Workers Party (PKK). The tensions are playing into the hands of Turkey, which continues its military push against PKK positions in the region. The PKK has waged for decades an armed insurgency in Turkey, and is considered a terrorist organization by Ankara and much of the international community.

The conflict began when Masrour Barzani, the prime minister of the Kurdistan Regional Government (KRG), dispatched peshmerga troops to Zini Werte in the town of Rawanduz, some 40 miles (61 kilometers) northeast of Erbil. Zini Werte has served as a buffer zone between the Patriotic Union of Kurdistan (PUK) and the ruling Kurdistan Democratic Party (KDP) for over 20 years, since the 1998 deal that ended the civil war. The move has escalated tensions between the KDP and PUK, as Zini Werte is considered the PUK's turf, home to many PUK supporters.

Irked by the move, the PUK countered by deploying its own peshmerga forces to Zini Werte. The PKK then intervened, accusing both parties of invading the PKK's turf. The outlawed group sent a delegation of three to the area and demanded the parties withdraw in 72 hours.

When the PUK and KDP dragged their feet, the PKK set up its own military post in the area April 8. The dispute took a deadly turn on April 15 when Turkish forces bombed the PKK post and killed three PKK fighters. PKK sources accused the KDP of sharing the post's location with Turkey.

However, according to an independent source based in Erbil, the Turkish army doesn’t need third-party intel to locate the post.

“Given their nonstop drone activities, it’s not difficult for them to locate the PKK post,” the source told Al-Monitor.

Why has this small village become such a hotspot? According to the KDP, Zini Werte is used as a smugglers' route into northern Iraq from the Iranian border, and its deployment aims to prevent the spread of the novel coronavirus. The KDP also said that the peshmerga it dispatched to the area are active under the Peshmerga Ministry and not affiliated with the KDP.

The PUK, in turn, argued that the move effectively expanded territorial control of the KDP. It questioned why the ministry selected troops outside the PUK's control for deployment, as opposed to the PUK-controlled 6th Peshmerga Brigade in Ranya.

Nevertheless, the motive behind the KDP’s deployment allows the two parties to find a compromise. Indeed, KRG President Nechirvan Barzani stepped in at the request of the PUK and said the deployment would be “temporary.”

“They will surely be withdrawn once they are no longer needed,” he told the local press April 20, paving the way for a reconciliatory meeting between PUK and KDP officials April 22. Barzani also slammed the PKK, saying its presence in the area is unlawful.

The PKK’s defiance, meanwhile, changes the tone of the conflict. The PKK believes the KDP coordinated its deployment with Turkey, as the presence of the peshmerga endangers the PKK's movements between Mount Qandil, Dola Shawle and Dola Akoyan.

One PKK leader even claimed the area as PKK turf. “Zini Werte is a zone totally under control of the guerrilla. It is neither the KDP’s nor the PUK's,” wrote Mustafa Karasu, a senior PKK leader, in an article widely circulated in the pro-Kurdish media.

According to Karasu, the move has been backed by Turkey which aims to eliminate the PKK. “Turkey wants to collaborate with the KDP to achieve its plans to invade Qandil,” he wrote.

Karasu warned that the unfolding situation also threatens the PUK, as it will allow Turkey to put pressure on Sulaimaniyah, the PUK’s stronghold.

The PKK is not convinced the move is aimed at containing the coronavirus.

“This zone is some 40-50 kilometers air-distance from the Iranian border. But that terrain isn’t suitable for civilian passage. The area where the KDP has deployed cannot be used by civilian vehicles. There is no point to set up a post there as KDP checkpoints are only 5-6 kilometers away,” Karasu wrote.

Another source based in Erbil also agreed that the move poses risks for the PUK: The party might lose its regional base if the KDP's clout grows.

​The source stated that the area has become a Turkish target due to the PKK presence. “The PUK is concerned that these operations [by Turkey] can extend to other areas where the PUK is powerful,” the source said.

According to the source, the tension between the two parties stems from their political rivalry. After the death of PUK leader Jalal Talabani, the party exerted efforts to regain its influence in Iraqi Kurdistan. “This tension drives both sides to show off, and hence lies the political background of the crisis,” the source said.

Yet what importance does the area bear? “This area has both social and military importance," the source said. "Zini Werte is a high-altitude [mountainous area] facing Mount Qandil. It links Qandil to Karux. Whoever controls the area extends their room for maneuver.”

Turkey has extended the scope of its military operations against the PKK after PKK-affiliated Kurdish groups increased their clout in Syria and throughout Iraq during the fight against the Islamic State. In addition to Kirkuk, Makhmour and Jalawla, the Turkish army has also targeted the Makhmour refugee camp, where families of deceased PKK fighters live, some 100 kilometers (62 miles) south of Erbil. Recent Turkish airstrikes on the camp claimed the lives of three women.

Along the border region, Turkey has waged military campaigns for years against the PKK camps in Qandil, Hakurk, Zap, Avasin, Metina, Haftanin and Gara. However, over the past few years it has developed a new strategy to cut off Iraq’s Sinjar from the northeastern Syrian territories controlled by Syrian Kurdish groups. Accordingly, Ankara erected 20 military posts in northeast Syria and began nonstop drone monitoring on the Iraqi side of the border.

In addition to this strategy, Turkish forces and intelligence officers have carried out assassinations of PKK leaders. The cross-border operations Claw-1, Claw-2 and Claw-3, which started in May 2019, have crippled the PKK’s operational capability. Talk of a possible collaboration between the KDP and Turkey in Zini Werte stems from the timing of the KDP deployment in the middle of Operation Claw-3.