One reported dead in fight between Kurdish groups in Iraq

A peshmerga soldier in the Kurdistan Region of Iraq reportedly died during a fight with the PKK on Sunday amid tensions between the two groups as well as with Turkey. 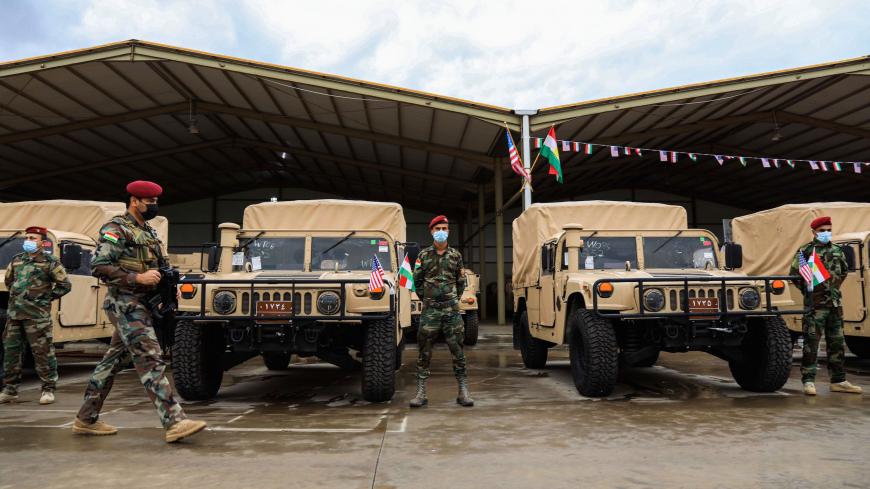 Members of the Kurdish peshmerga forces attend a handover and US military and logistic assistance distribution ceremony to the Peshmerga Ministry of the Kurdistan Regional Government (KRG) in Erbil, the capital of the autonomous Kurdish region in northern Iraq, on Nov. 10, 2020. - SAFIN HAMED/AFP via Getty Images

Clashes between Kurdish armed groups in northern Iraq reportedly led to one death on Sunday.

The peshmerga is the military of the autonomous Kurdistan Region in northern Iraq. The KDP is the largest party in the Kurdistan Regional Government (KRG), and peshmerga forces are either affiliated with the KDP or the second-largest party, the Patriotic Union of Kurdistan (PUK). Dahuk province is controlled by the KDP.

The PKK fights the Turkish state for greater Kurdish rights in the country. It has long based itself in the mountainous border between northern Kurdistan Region and Turkey, including in part of the Dahuk border.

Tensions between KDP-affiliated forces and the PKK have increased in recent weeks. In November, KRG Prime Minister Masrour Barzani dispatched forces to PKK-held territory in Dahuk province. The PKK said the deployment sought to help Turkey battle the PKK there, while the KDP said the PKK’s presence was causing locals to flee and the entry of Turkish forces into the area.

The Turkish military began a major ground and air offensive against the PKK over the summer. The KRG opposes Turkey’s attacks and is also against the PKK’s presence in its territory. The PKK views the KDP as too deferential to Turkey due to the KDP’s economic-based relationship with Ankara.

The peshmerga and the PKK have clashed with one another amid the chaos. The KRG accused the PKK of attacking peshmerga forces in Dahuk in November. The KRG has increased security in the Assyrian Christian and Kurdish communities of Dahuk as a result of the conflict.

At least three KRG security forces have been killed this year by the PKK, Prime Minister Barzani said on Monday.

The two sides have been in conflict throughout the year. In April, peshmerga forces from both the KDP and the PUK as well as the PKK all deployed to the town of Zini Werte where a standoff took place. The PUK has better relations with the PKK than the KDP does.

Intra-Kurdish tensions go back even further to the Kurdish civil war in the 1990s when the PUK and PKK fought the KDP.