Turkey turns up heat on PKK in Iraqi Kurdistan

Iraqi Kurdish forces have deployed to a mountainous area long used as a camp ground by PKK militants, adding to the pressure the militants face from Turkey’s cross-border military operations in the region. 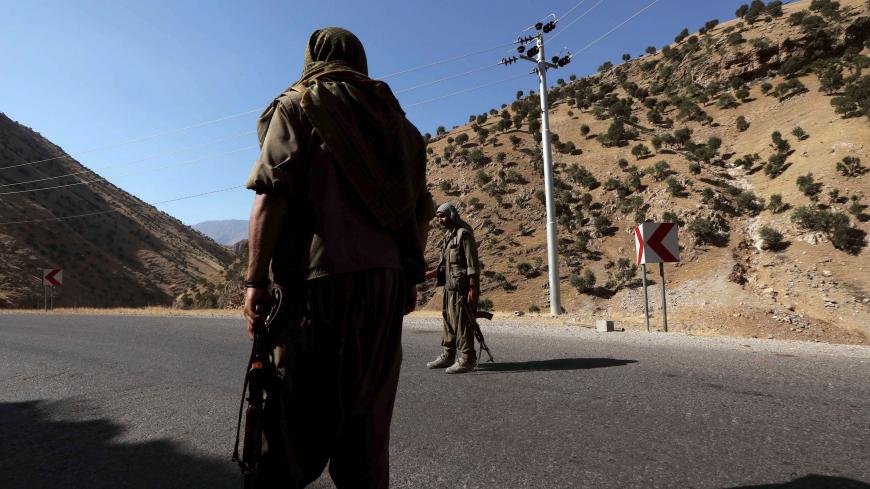 A member of the Kurdistan Workers Party (PKK) carries an automatic rifle on a road in the Qandil Mountains, the PKK headquarters in northern Iraq, on June 22, 2018. - SAFIN HAMED/AFP via Getty Images

Turkey’s months-long military operations in border areas on Iraqi Kurdistan soil have turned up pressure on the outlawed Kurdistan Workers Party (PKK), which has long used the region as a base in its armed campaign against Ankara, pushing the militants to move deeper into Iraqi Kurdistan, where their presence is causing friction with local Kurds and fanning fears of renewed Kurdish fratricide.

Tensions spiked in mid-October, when special forces under the direct command of Masrour Barzani, the prime minister of the Kurdistan Regional Government (KRG), moved northeast of Dohuk to encircle Gare Mountain, which is one of the PKK’s camp areas in the region. After special forces deployed to at least 10 localities, commando units set up checkpoints in the area, according to Kurdish media outlets.

Barzani’s Kurdistan Democratic Party (KDP), Iraqi Kurdistan’s dominant political force, was already under fire for siding with Turkey after it deployed peshmerga forces in April to a flashpoint area west of the Qandil Mountains, home to the PKK’s headquarters. The two sides stepped back from the brink of armed confrontation, but Erbil’s Oct. 9 accord with Baghdad further irked the PKK. The accord — an attempt to stabilize the Yazidi-populated Sinjar region near the Syrian border — aims to end the PKK presence there and marginalize PKK-linked Yazidi groups. Ankara has warned it will not let Sinjar become “a second Qandil,” carrying out several air raids in the area, wary of the foothold the PKK has gained in Sinjar since coming to help the Yazidis against the Islamic State in 2014.

Simultaneously, the PKK was accused of assassinating a senior Iraqi Kurdish security official in his home in a village near Dohuk Oct. 8, a claim the group denied. Later in the month, Kurdistan’s Security Council announced that 17 suspects, among them a dozen with PKK links, had been arrested for plotting attacks on diplomatic missions and businesses in the region. Yet council members representing the Patriotic Union of Kurdistan (PUK) — the KDP’s main political rival, which has been on better terms with the PKK — said they were not aware of such plots.

According to PKK sources who spoke to Al-Monitor, the Iraqi Kurdish deployment at Gare aims to help Turkey expand its military operations against PKK camp areas, ongoing since last year and focusing on Haftanin, just across the border. The move to encircle Gare, they say, aims to cut the area off from Metina, which lies to Gare’s northwest, and thus make it easier for Turkish forces to descend on Metina from Haftanin.

The Turkish media presented the deployments as KRG preparations for a comprehensive military operation against the PKK, reporting that PKK camps have been surrounded and their routes to the inland cut off.

PKK commander Murat Karayilan similarly charged that the KDP’s actions appeared to be preparations for war. “They want to station forces wherever we are based. … If it goes on like this, the prospect of all this turning into a war will not be a distant one. I, personally, would not like to order [PKK militants] to target Kurds,” he said in a television interview last week. Karayilan rejected criticism that the PKK is flouting the KRG’s authority, targeting its institutions and jeopardizing Kurdish gains in Iraq. If Turkey overruns the PKK, he warned, Erbil will be next in line.

KDP heavyweights retorted that the PKK was providing Turkey with a pretext to expand its military presence in Iraqi Kurdistan. Rebwar Babkeyi, head of the Kurdish Parliament’s foreign affairs committee, said, “The way for the PKK to show respect to Kurdistan’s institutions is to leave Kurdistan’s territory. … The PKK presence in border areas has caused villages to be evacuated and drawn Turkish troops inside our borders.”

Politicians and intellectuals called for restraint, alarmed by the specter of another bout of fratricide after the intra-Kurdish bloodshed in the 1990s. Mihemed Emin Pencewini, who mediated between feuding Kurdish groups at the time, warned that a flareup between the KDP and the PKK could eventually engulf all Kurds, urging everyone to act responsibly to avoid a crisis that “could set the Kurdish cause back half a century.”

Political analyst Mustafa Sefik, a veteran of Kurdish movements, told Al-Monitor that the PKK is increasingly becoming a burden on Iraqi Kurdistan. He cited three main factors underlying the KDP’s dispatch of troops to Gare. First, he argued, the PKK’s actions are leading to the expansion of Turkish military operations. Second, due to mounting Turkish pressure from the north, the PKK is moving deeper into Iraqi Kurdistan. And third, the PKK is using its military might to subjugate other groups.

According to Sefik, the KDP has realized that whenever the PKK gets squeezed in Turkey, it turns its attention to Iraqi Kurdistan. “One could have called it a tactical mistake had it happened once or twice. But the consistency suggests that this is a strategy,” the analyst said. The PKK, he stressed, has given Turkey ground to intervene both in Iraqi Kurdistan and Syria’s Kurdish areas. “This worries the Kurdistan government,” he said.

Moreover, the PKK takes sides in Iraqi Kurdistan’s domestic issues, Sefik noted. “The PKK has always stood up against the KDP. It has always egged the PUK on against the KDP and sided with other KDP opponents. … It has never paid regard to the sensitivities of [Iraqi Kurdistan],” he said. “The PKK and [Iraqi Kurdish] forces have warred four times over the years. It is a price big enough to not make the same mistake again.”

A Kurdish source from Erbil who requested anonymity, argued that it was hard for Turkey to intervene in Gare because the area is far from the border, but stressed the KDP’s own concerns had a role in its deployment of special forces and commandos to the area. According to the source, the KDP is wary of the PKK’s increasing presence outside camp grounds, including special teams present in the area between Gare and Soran, and interactions with local Kurds despite its commitment to hold back from seeking a popular base for itself in Iraqi Kurdistan.

The aim of surrounding Gare, the source said, is to cut off the PKK’s eastward route to Soran and hamper its westward movements to Kurdish-held northeast Syria.

A source close to the PKK, meanwhile, said the special forces had partially pulled back following a brief skirmish to the south of Dinarta and contacts had begun between the two sides after independent mediators stepped in to defuse the tensions.

All in all, the KDP believes the PKK is jeopardizing the constitutional gains of Iraqi Kurdistan by drawing its war with Turkey to the south, while the PKK maintains the transnational Kurdish problem and the future of the Kurds should be handled as a whole. Diverging political visions add to the incompatibility, and Turkey’s interventions have come to rekindle old animosities that were swept under the rug, evoking fresh scenarios of fratricide.