Turkish Kurdish militants entrenched in Iraqi Kurdistan face mounting calls to leave the region after the killing of six members of the Iraqi Kurdish armed forces. 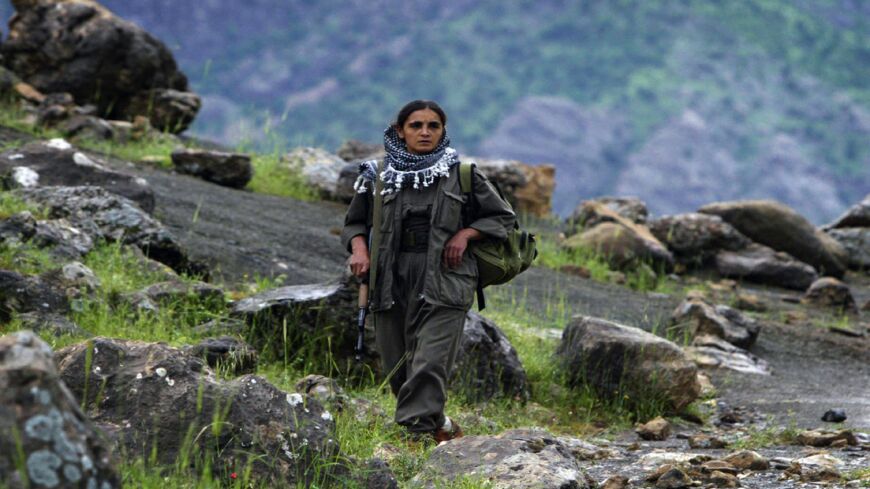 A Kurdish female peshmerga fighter carries her weapon while walking in the foothills of the Qandil Mountains located along the Iraq-Iran border, May 5, 2006. To rid Iraq of the Kurdistan Workers Party (PKK) rebels, Ankara would have to launch an operation in the rugged Qandil Mountains located in the east of the Iraqi Kurdish region. The massive mountains, located about 120-150 kilometers north of Arbil, the capital of the autonomous Kurdish government of Iraq, stretch from the tip of southeastern Turkey along the border with Iran. - ALI AL-SAADI/AFP via Getty Images

DIYARBAKIR, Turkey — Tensions are flaring between the Kurdistan Democratic Party (KDP), the main political group ruling Iraqi Kurdistan, and armed Kurdish militants from Turkey who are based in the region, rekindling fears of renewed intra-Kurdish fighting amid growing Turkish military pressure on the militants.

Lying at the core of the tensions are escalating Turkish cross-border operations against the outlawed Kurdistan Workers Party (PKK), which has long used mountainous bases in Iraqi Kurdistan in its armed campaign against Ankara since 1984. On June 5, a unit of Iraqi Kurdish peshmerga forces attempted to move into an area in the Metina mountain range near the town of Amedi in Dahuk province. Five peshmergas were killed and seven others injured in what Iraqi Kurdistan authorities described as a PKK ambush. The group denied responsibility, claiming its militants had only fired warning shots in the air and a mine explosion or an airstrike might have caused the deaths. A sixth peshmerga was killed near Zakho in the same province three days later, with local officials blaming the attack on PKK snipers.

In a series of military operations since mid-2019, the Turkish military has sought to curb the PKK’s ability to move between its camps in Iraqi Kurdistan, which are spread on a long stretch from the Qandil Mountains on the Iranian border to the Syrian frontier to the west. Turkish forces have set up dozens of checkpoints and bases to prevent PKK infiltrations into Turkey and cut off the group’s main camp areas in the region. The PKK has accused the KDP of colluding with Turkey and resisted attempts by peshmerga forces to deploy to or encircle areas under its control. In late April, following the launch of the latest phase in the operations, Turkey’s interior minister said Turkish forces would establish a base in Metina.

The deadly incidents marked the most serious escalation between the PKK and the KDP since an armed standoff in spring 2020 over control of the strategically important area of Zine Werte that involved also the Patriotic Union of Kurdistan (PUK), the KDP’s main political rival — the PUK has been on better terms with the PKK. Subsequently, the Turkish military bombed a PKK post in the area, and the PKK accused the KDP of sharing the post's location with Turkey.

The tensions have stoked apprehension over the specter of renewed intra-Kurdish fighting similar to that in the 1990s when the KDP clashed with the PUK and backed Turkey’s cross-border pursuit of the PKK. The bloodshed, which the Kurds call “brakuji,” or fratricide, claimed hundreds of lives and left more enduring trauma among Kurds. KDP leader Massoud Barzani publicly vowed in the ensuing years that “there will never be brakuji again.”

Turkey’s expanding operations within Iraqi Kurdish territory followed a crackdown on the PKK inside Turkey that has markedly curbed the group since the collapse of settlement talks on the Kurdish question in 2015. Turkey has also taken control of several enclaves in northern Syria in a bid to curtail the gains of Syrian Kurdish groups linked to the PKK.

Erbil, which has enjoyed close ties with Ankara and, crucially, relies on Turkish cooperation to export oil, has repeatedly called on the PKK to leave Iraqi Kurdistan. Iraqi Kurds are irked that the PKK provides a pretext for Turkish military operations that often cause civilian casualties and have sought to assert control in remote regions to keep the PKK away from residential areas.

Despite the tensions, Iraqi Kurdish observers believe neither side has an interest in fighting each other, but the PKK should stop using Iraq Kurdistan as a battlefield in its conflict with Ankara.

According to Erbil-based political writer Sartip Cewher, the KDP is under Turkish pressure to join operations against the PKK. But “neither the PKK nor the KDP wants fratricide,” he told Al-Monitor. “The KDP is under huge internal pressure to avoid [fighting with the PKK], and the PKK would not want to fight simultaneously on two fronts — against Turkey and the Kurdish government.”

Cewher called for an impartial probe to uncover the perpetrators of the Amedi attack and a dialogue between all Kurdish parties to resolve tensions. “The PKK, too, should be part of the discussions. The Kurdish parties should come together and push the PKK on a solution,” he said. The prevailing view in Iraqi Kurdistan is that the presence of both the PKK and the Turkish forces is uninvited, and “they should resolve the problem on their side and leave us alone,” he added.

Mustafa Ari Shafik, a political analyst who has closely watched the issue for years, told Al-Monitor that under the existing regional conditions, the PKK’s armed struggle was harming fellow Kurds both in Iraq and Syria, but he played down the prospect of armed conflict between Iraqi Kurds and the PKK. Stressing that Iraqi Kurdistan “has nothing to do” with the conflict between the PKK and Ankara, he said, “The Turkish state should ensure its security within its own borders and on its own soil. And the PKK — if it claims it is waging a war for the Kurdish people and this is the way to resolve the Kurdish issue — then it should take the war to the lands where it started.” The Erbil government, he added, is responsible for the security of its territories and people, and the PKK should not hamper efforts to that end “if it recognizes and respects the status” of Iraqi Kurdistan.

According to Shafik, the PKK has not only contributed nothing to the solution of Iraqi Kurdistan's problems, but it has been failing militarily as well. “They have ceded to Turkey [the control of] the regions of Hakurk, Haftanin and Zap, where they have been present since 1984. The PKK is living in helplessness here — helpless both to itself and the region’s administration,” he said.

Shafik argued that the PKK should focus on a political settlement, and its political work should be “within the framework of the perspectives the Kurdish and Iraqi governments would outline.” The group “needs to step back from its war posture” in Iraqi Kurdistan as well as in Syria, he said. “It could advocate its political work, but maintaining armed forces is detrimental both to the regional government and the people as it lays the ground for the attacks of other forces and neighboring states."

Tensions between the PKK and the KDP have spilled over to their supporters as well. In Turkey, Kurds who sympathize with the PKK have grown deeply mistrustful of and even hostile to the KDP and the Barzanis, as evidenced by heated exchanges on social media. The prevailing hope is that the row stays confined to cyberspace.