Iraqi Kurds worry that Turkey’s pursuit of PKK militants inside Iraqi Kurdistan could result in a permanent Turkish military presence and moves to undermine their autonomous region. 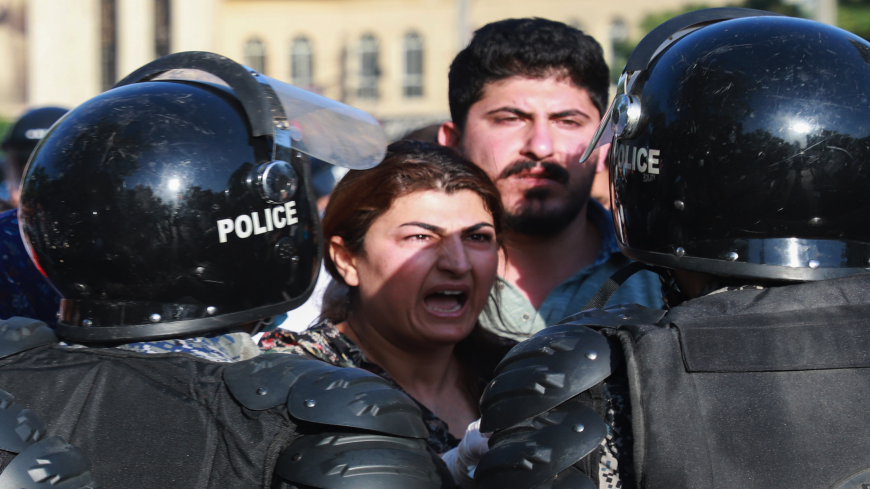 An Iraqi kurdish woman confronts riot police as she takes part in a demonstration to denounce the Turkish assault in northern Iraq, in Sulaimaniyah city, in the Kurdish autonomous region of northern Iraq, on June 18, 2020. Turkey launched a rare ground assault into northern Iraq on June 17, deploying special forces against rebels from the Kurdistan Workers' Party (PKK), which is blacklisted by Ankara as a "terrorist" group. - SHWAN MOHAMMED/AFP via Getty Images

The scope of Turkey’s ongoing military operations against Turkish Kurdish militants based in Iraqi Kurdistan is stoking fears in the Kurdistan Regional Government (KRG) that its own future might be at stake as part of broader Turkish designs in the region.

For years, the KRG has acquiesced to Turkish cross-border operations against the Kurdistan Workers Party (PKK), which has entrenched itself in Iraqi Kurdistan, using mountainous bases to sustain its armed campaign against Ankara. The Kurdistan Democratic Party (KDP), the dominant political force in Iraqi Kurdistan, has had an uneasy relationship with the PKK and sought to stay on good terms with Turkey, while the Patriotic Union of Kurdistan, the other major party in the region, has been more flexible toward the PKK.

While cautious not to anger Ankara, the KDP maintains that the Kurdish problem in Turkey should be resolved politically and that the PKK is not welcome in the region. Beyond the official rhetoric, however, Turkey’s expansive military campaign since June has fueled apprehension in KDP ranks over its ultimate objectives. Fears are on the rise that Turkey could seek a lasting military presence to weaken the KRG, cut its land connection to Kurdish areas in Syria and even push for downgrading the KRG’s federal status in Iraq.

Turkey has notably reduced PKK activity inside its own borders in recent years. In the cross-border campaign, its first objective has been to paralyze the PKK’s movement ability in the group’s camp areas, which stretch from the Qandil Mountains on the Iraqi-Iranian border, where the PKK has its headquarters, all the way to the Syrian border to west, including Hakurk, Avashin, Gare, Zap, Metina and Haftanin.

After creating a partial buffer zone in Hakurk last year, Turkey now appears to be seeking a second buffer zone from Haftanin and Metina to Zandira, and then a third one from Metina to the Kurazaro Mountains that would disconnect Zap and Gare. Two other areas, away from the border, have been in Turkey’s crosshairs: the Yazidi-populated Sinjar, known also as Shingal, where the PKK has helped create the Shingal Defense Units, alarming Ankara that “another Qandil” is in the making, and the Makhmour refugee camp near Kirkuk, which is home to thousands of Kurds who fled Turkey in the 1990s.

In Syria, Turkey makes no secret of its intention to turn the enclaves it has seized through four military operations into a contagious buffer zone of up to 35 kilometers (22 miles) in depth, extending all the way to the Tigris River, which forms a short stretch of the Turkish-Syrian border before flowing into Iraq. And on the eastern bank of the Tigris, Ankara plans a second border crossing with Iraq to bypass the existing one, which opens into Iraqi Kurdistan, and secure a route to Tal Afar and Mosul under some form of Turkish military control. Wary of its delicate ties with Kurdistan, Baghdad has dragged its feet on the project, but as soon as Mustafa al-Kadhimi became Iraq’s new prime minister in May, Ankara put the issue back on the table.

In sum, all those plans and moves are stoking Kurdish fears that Turkey’s objectives in Operation Claw, unfolding phase by phase since last year, go beyond the PKK.

The fourth and fifth phases, codenamed Claw-Eagle and Claw-Tiger, respectively, began in mid-June, with Turkish troops advancing to a depth of up to 30 kilometers (19 miles) and setting up 24 new bases and checkpoints, which bring the number of their deployment sites to more than 50.

Irked by the scope of the operation, Hoshyar Zebari, a KDP member and former foreign minister of Iraq, tweeted, “The recent Turkish military incursion into Iraqi Kurdistan … is a very serious geopolitical development. The intensity of the attack is alarming. Calls by Turkish leaders to revive historical claims [over] Mosul province [are] even far more disturbing.”

Writer and political analyst Mustafa Shefik, a veteran of Kurdish movements, is among those who believe that Turkey’s objective is not limited to pursuing the PKK. “There is concern that Turkey will entrench itself permanently. Such an extensive military deployment cannot be explained away with the PKK’s presence in the region. Turkey’s intention is to narrow the Kurds’ space as much as possible,” he told Al-Monitor, adding that Kurdish politicians are closely watching Turkey’s moves.

Shefik believes that both Turkey and Iran cannot stomach the KRG’s current status, even though it is enshrined in the Iraqi Constitution, and will use any opportunity and all means to undermine it.

Turkey may succeed in curbing PKK movement in mountainous areas to some extent, he said, but “the guerrillas could move to other mountains. Turkey cannot control all that.”

According to Shefik, Turkey’s military ventures, from Iraqi Kurdistan to Syria and Libya, have drawn on Washington’s dwindling profile in the region. “Whether Turkey’s presence could become permanent in the long run will depend on how world politics develop,” he said. “Russia and Turkey are filling the vacuum resulting from uncertainty in US policies, which began under Barack Obama and continued under Donald Trump. Trump’s indifference allows Turkey to play as it likes. Things might change after the US elections.”

The analyst believes that Turkey’s plan for a new border crossing at Ovakoy is aimed at disconnecting Kurdish-populated regions as part of a broader strategy to encircle the Kurds. “The Ovakoy plan has military, strategic and security aspects, beyond the economic one. It is not a well-meaning project,” he said. According to Shefik, the plan is aimed at disconnecting Iraq’s and Syria’s Kurds and could face objections beyond the KRG. “Not only Baghdad’s attitude but also that of the United States will bear on this issue. Iraq and Iraqi Kurdistan are the rear front in the US strategy to stay in Syria. Likewise, Kadhimi could hardly make a move by looking from the prism of Iraq only,” he said.

Shefik blames both Ankara and the PKK for the growing ramifications of Turkey’s Kurdish problem. “For years, both Turkey and the PKK have insisted on a military solution, which has done no good to Turks and Kurds alike. Had Turkey managed to produce a solution observing the interests of both sides, it would have been in a much different position on the international stage today. And the PKK’s policy, which gives Turkey pretexts [for military action], has been at least as dangerous and erroneous as that of Turkey,” he said. The PKK “has done harm” to Kurds in both Turkey and Iraq, he added.

Turkey’s actions in Syria have only fed hostility with the Kurds, Shefik said. “Where is this going to end? They can weaken the Kurds but cannot eradicate them. The Kurds today are in a position to sway balances in the Middle East. They may not have a state, but their role is more influential than that of a state. Turkey’s policy will cause it serious troubles both at home and in the international arena,” he said.

Turkey’s military pressure is forcing the KRG to move closer to Baghdad. Yet Kadhimi is on good terms with the Kurds and needs Kurdistan’s support domestically to rehabilitate the Iraqi state, which keeps him from playing the game that Turkey offers. And the Kurds believe that regional and international conditions will help them preserve their influence.