While America counts its votes, Erdogan advances his agenda

Can the next US president manage Erdogan’s ambition? 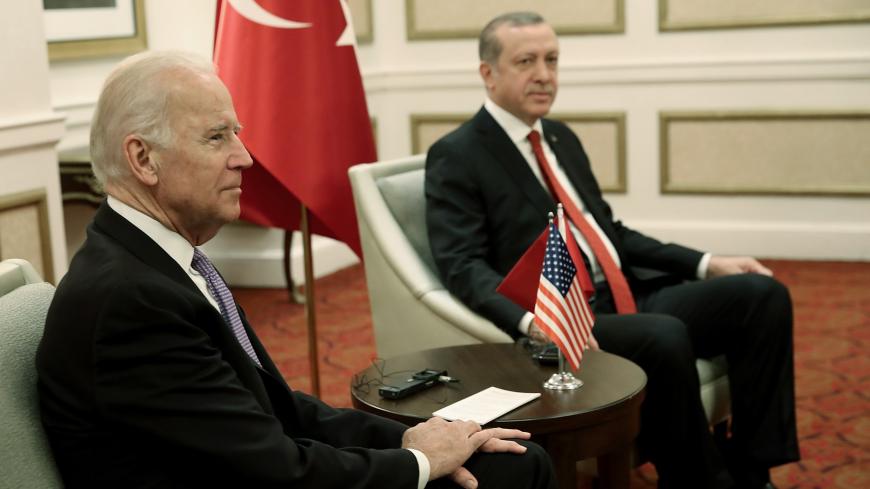 Americans may be glued to the televisions and social media, but Turkish President Recep Tayyip Erdogan is not taking the week off for the US election.

Some of his more assertive policies may in fact be designed to hedge against the uncertainty of a Joe Biden presidency, which appears to be the likely outcome as we go to press.

One such hedge was Turkey’s testing of the Russian S-400 missile system last month. US President Donald Trump has until now been Erdogan’s firewall against congressionally mandated sanctions over Ankara’s decision to buy weapons from Moscow. But that cozy relationship between the two leaders appears likely to end soon. Already, Biden has been the target of a negative press campaign in Turkey’s pro-government media, as Semih Idiz explains in a recent Al-Monitor podcast.

Erdogan has launched Turkey on an increasingly assertive and independent regional posture. Unlike Americans on the right and left, the concept of "endless wars" doesn’t register for him. And despite being a member of NATO, and a onetime aspirant for European Union membership, Erdogan seems to relish accusing Europe, and especially France, of mistreating Muslims, with pointed back-and-forths threatening boycotts and sanctions.

The next US administration may have come to come to terms with a Turkey that is less of an ally and more a self-interested occasional partner — and one that pursues its own agenda at the center of increasingly complex and conflict-prone relations in the Caucuses, the Middle East and the eastern Mediterranean.

Below we assess the tangle of four fault lines emanating from Erdogan’s approach.

Thanks to Turkish-supplied weaponry, for instance, Azerbaijan has pressed its military campaign against Armenia, ignoring calls from both the United States and Russia to cease fire.

Both Washington and Moscow maintain close ties with both Armenia and Azerbaijan, but neither has been able to stop the Azeri assault. Turkey, which is close to Azerbaijan, views the gains of war as far outweighing the risks. Azeris are ethnic Turks, and the war is popular with Erdogan’s base in Turkey.

Azerbaijan "has succeeded in reversing some of the humiliating losses it suffered when it lost around a fifth of its territory to Armenian forces and was forced to call off the fight in 1994," writes Amberin Zaman. "According to the latest field reports, Azerbaijani forces have clawed back a large chunk of territory occupied by Armenian forces in the area separating Nagorno-Karabakh from Iran for the first time in 26 years and have advanced to the critical Lachin corridor connecting Armenia proper to the enclave."

"Azerbaijan’s energy earnings have allowed it to build up an arsenal of sophisticated weaponry with precisely this moment in mind," Zaman explains. "Israel provided a fair amount in exchange for being allowed to use Azerbaijan to spy on Iran. But it was Turkey’s assistance — with hundreds of military trainers, armed drones and Syrian mercenaries reportedly deployed in Azerbaijan’s favor — that helped to decisively tip the balance."

"As Turkey conducts simultaneous campaigns in different theaters — including Ankara’s assistance to Azerbaijan in the Nagorno-Karabakh conflict — Moscow is tempted to exploit the turbulence to extract concessions from Ankara," writes Anton Mardosov. "Meanwhile, it is not unfathomable that a third player in Damascus will look to benefit from the turbulence."

"Recent Russian attacks on the Syrian opposition forces [backed by Turkey] are widely regarded as an unequivocal message from Russia to Turkey that, firstly, Moscow is not ruling out another escalation in Idlib," adds Mardosov. "The message has also to do with the Nagorno-Karabakh conflict. Russia is not satisfied with the Turkish stance and its attempts to expand its influence in the south Caucasus."

Turkey’s military actions and occupation of northeastern Syria, where Turkish-backed forces have intensified attacks on areas under Kurdish administration, has also been called out by Egypt, as Hagar Hosny reports.

"Turkey’s months-long military operations in border areas on Iraqi Kurdistan soil have turned up pressure on the outlawed Kurdistan Workers Party (PKK), which has long used the region as a base in its armed campaign against Ankara, pushing the militants to move deeper into Iraqi Kurdistan, where their presence is causing friction with local Kurds and fanning fears of renewed Kurdish fratricide," writes Fehim Tastekin.

The Kurdistan Democratic Party (KDP), the leading party in the Iraqi Kurdistan Regional Government (KRG), has good ties with Ankara and has tried to contain the military actions and influence of PKK forces based in the region. The PKK intensified its actions against Iraqi Kurdish officials following an agreement between the KRG and the Iraqi central government to limit PKK involvement in the Sinjar region.

PKK meddling in Iraqi Kurdish politics and attacks on officials have drawn the KDP even deeper into Turkey’s war on the PKK.

"The KDP believes the PKK is jeopardizing the constitutional gains of Iraqi Kurdistan by drawing its war with Turkey to the south, while the PKK maintains the transnational Kurdish problem and the future of the Kurds should be handled as a whole," Tastekin concludes. "Diverging political visions add to the incompatibility, and Turkey’s interventions have come to rekindle old animosities that were swept under the rug, evoking fresh scenarios of fratricide."

In the eastern Mediterranean, Turkey has expanded its relationships with Malta and the Government of National Accord in Libya, facing off against Greece and Egypt over allocation of energy resources in the sea and the future of Libya, where Egypt backs forces opposed to the government.

The Libyan parties are set to begin UN-brokered peace talks in Tunis on Monday, as we report here.

Greek Defense Minister Nikos Panagiotopoulos this week upped the ante, announcing plans for a Greek naval base on Crete, as Sean Matthews reports.