Are attacks on Syrian opposition signal from Moscow to Ankara?

As Turkey conducts simultaneous campaigns in different theaters — including assistance to Azerbaijan in the Nagorno-Karabakh conflict — Moscow must be tempted to exploit the turbulence to extract concessions from Ankara. 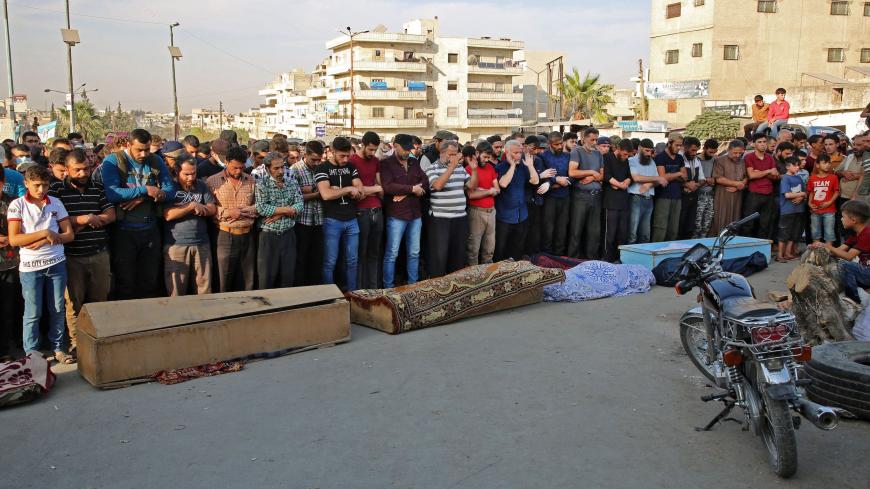 Syrians take part in the funeral of 10 fighters with the Turkey-backed Faylaq al-Sham rebel faction in Syria, in the northwestern city of Idlib, on Oct. 26, 2020, following their death in a Russian airstrike. - MOHAMMED AL-RIFAI/AFP via Getty Images

Recent attacks on the Syrian opposition forces in the heart of territories overseen by Turkey have raised questions about how sustainable the current status quo along the lines of contact really is.

The current relative stability is primarily the result of the actions of the Turkish military, recorded at the talks between Putin and Erdogan, and the result of cooperation within the Astana format or the Adana Accord, which Moscow brought up to avoid uncomfortable questions about Turkish influence in Syria.

As Turkey conducts simultaneous campaigns in different theaters — including Ankara’s assistance to Azerbaijan in the Nagorno-Karabakh conflict — Moscow is tempted to exploit the turbulence to extract concessions from Ankara. Meanwhile, it is not unfathomable that a third player in Damascus will look to benefit from the turbulence.

On Oct. 23, oil and fuel tankers in the city of Jarablus on the Turkish border were hit by mysterious strikes. According to one account, the tankers were shipping oil for sale from the territories controlled by the Syrian Defense Forces (SDF). Russian military blogs suggested the perpetrators were either the Russians or the Syrians. The strike might have come from the Syrian army’s military aircraft with an air-to-surface missile or from land-based Tochka or Tochka-U tactical ballistic missile systems. The attack might also have been carried out by the Iskander-M system from the Russian-controlled Khmeimim Air Base or using ship-based Kalibr missiles. As the ensuing fire burned an entire night, local residents and activists were unable to collect evidence and take photos of the wreckage.

One reason to think President Bashar al-Assad’s army may have been responsible for the attack is that it has engaged in similar behavior in the past. Last November the regime targeted oil tankers in Jarablus to clamp down on oil smuggling by the Kurds. The Syrian regime might have tried to kill two birds with one stone: first, undermine the economically independent SDF by disrupting its smuggling networks, and second, stir conflict between Moscow and Ankara, with a strike in the heart of Turkish-controlled territories.

But Russian culpability for the attack, although less plausible, cannot be ruled out. The Russian squadron in the Mediterranean includes at least one ship capable of deploying Kalibr missiles, the Black Sea Fleet’s Admiral Essen frigate. At the end of 2017, Russia confirmed it used Iskander ballistic missiles in Syria (its first target supposedly being a convoy of vehicles transporting arms to Idlib). In fact, Iskander launch systems were deployed to the Khmeimim Air Base in 2016, meaning that Iskanders were at the base during the heightened tensions between Turkey and Russia over the downing of the Russian Sukhoi Su-24 jet that had been hitting the Turkmen forces despite Ankara’s formal pleas to Moscow to stop.

Another episode lends further support to Russian involvement. On Oct. 26, the Faylaq al-Sham training camp in Syria was hit by an airstrike that left 70 recruits dead and over 100 injured. The faction, while maintaining ideological alignment to the Muslim Brotherhood, became the first group that the Russian Defense Ministry classified as the "moderate opposition" in Syria as opposed to the radical forces. Faylaq al-Sham took part in the Astana process and is now responsible for the protection of Turkish observation posts in Idlib. The group’s close ties with Ankara gave it leverage to ensure that local councils would not be replaced with the Salvation Government, which is affiliated with Hayat Tahrir al-Sham (HTS). The faction has also managed to maintain a neutral stance, avoiding joining the military command in Idlib headed by HTS.

Naturally, this strike was widely regarded as an unequivocal message from Russia to Turkey that, firstly, Moscow is not ruling out another escalation in Idlib. The message has also to do with the Nagorno-Karabakh conflict. Russia is not satisfied with the Turkish stance and its attempts to expand its influence in the south Caucasus. Sergei Naryshkin, head of the Foreign Intelligence Service, noted that fighters from factions with traditional ties to Turkey — most notably the Sultan Murad Division — were found to have been operating in Nagorno-Karabakh. Even if Russia has taken a neutral stance on south Caucasus matters in public, there are reasons to believe it may be supplying arms to Armenia via flights from Mineralnye Vody. Russian media outlets loyal to the Kremlin also claim that throughout October, Russian jets had been hitting the Syrian camps from which the opposition forces embark for the south Caucasus.

The Russian Defense Ministry has long refrained from making any official comments on the air force's activity in Idlib, dismissing any reports on Russian air attacks as false. And yet, Russian Telegram channels have on several occasions transmitted photos of the Russian Su-24 and Su-25 jets flying over Idlib. True, the strike against Faylaq al-Sham might have been carried out by the Su-24M2 in the service of the Syrian army while the Russian air force provided protection. Still, it is hard to believe the Russians did not know the real aim of the strike. One theory suggests Assad’s forces attacked the Faylaq al-Sham headquarters during Russian air patrols to undermine their Russian patrons. This overcomplicated explanation is less plausible.

Russian Telegram channels that had earlier published photos of the opposition recruits also promoted their versions of the attack. They claimed that the coordinates of the training camp had been given to Syrian military intelligence by the radical formation Hurras al-Din. They also reported that Turkey had not shared information needed to identify friend and foes, thus offering an excuse for an indiscriminate attack. Those arguments do not sound particularly compelling, but the Russians might well use them to substantiate their modus operandi in contacts with Turkish colleagues. Judging by reports in the Russian media, Moscow has been using such tactics ever since tensions flared in Idlib last February following the attack in northwestern Syria that claimed 33 Turkish soldiers' lives.

One way or another, Moscow is left in an uncertain position. On one hand, it is quite clear that the current situation in Idlib, which the Syrian regime has been struggling to control, is a reminder that Damascus’ power has limits. On the other hand, Moscow is not interested in cultivating alternative centers of power in Syria that seek to delegitimize the regime. Put together, those factors might explain why the Russians might stick the strategy of nibbling at bits of Idlib in a somewhat haphazard fashion and carrying out its cycle of offensive-retreat via a peace deal.

On top of it all, tensions in Nagorno-Karabakh started to swirl when Russia was already facing other problems within the Collective Security Treaty Organization, most notably a political crisis in Belarus and another revolution in Kyrgyzstan. The Turkey-Azerbaijan alliance — leaving aside the subject of Turkic solidarity — is built on concrete common goals and, no less crucially, rests on a legal basis. However, it would be an stretch to conceive of Ankara’s policy in the south Caucasus as an attempt to push the Russians aside.

This uncertainty feeds into a more general Turkish dilemma facing decision-makers in Russia. Several factors may explain Russian authorities’ acute and painful reaction to the spread of Turkish influence, even if this influence is somewhat lacking in economic heft (like the Russian ruble, the Turkish lira is in free fall). Some obvious factors may include nostalgia for imperial ambitions and patriotic fervor stirred up in the jingoistic news media. Another, though, could be found in an subconscious need to fill an ideological void in Russian policy. All these years, Russia has struggled to build a political narrative straddling the contentious ideas of Russophile philosophers like Soloviev, Ilyin or Berdyaev, studied so laboriously by Russian governors, to a somewhat fringe idea of the Russian world (Russky Mir) that gained prominence with the outbreak of the Donbass conflict.

Seen in this context, Turkey — a country that positions itself as a defender of the Muslim world — bewilders the Russian elites. Some such groups see Turkey primarily as a foe with whom Russia had fought many times in its history and who is not afraid to revive the role of Islam. On the other hand, Moscow and Ankara have cultivated connections that survived the 2015 crisis with the downing of the Russian jet. Indeed, relations between Putin and Erdogan, molded by several crises, serve as a basis for many projects, some of dubious utility. The dilemma for Russia, thus, is how to build relations with the country with whom Moscow shares as many differences as points of convergence.