Turkey is taking advantage of Russian dilemmas to claim a role in the Caucasus by backing for Azerbaijan in the Nagorno-Karabakh conflict with Armenia. 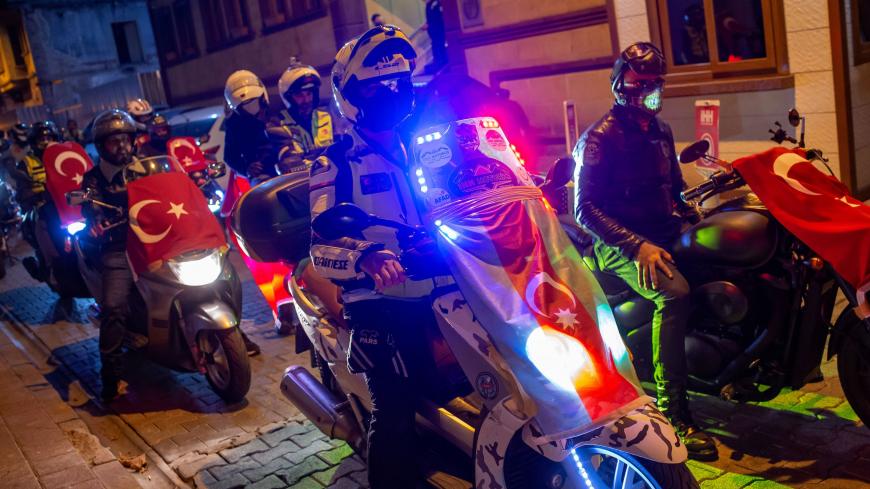 People display Turkish and Azerbaijan flags on their scooters as they take a tour in the city in solidarity with Azerbaijan called by Turkey's Humanitarian Relief Foundation, in Istanbul, on Oct. 5, 2020. - YASIN AKGUL/AFP via Getty Images

Turkey is positioning itself as a stakeholder in the prospective settlement process in the Nagorno-Karabakh conflict between Azerbaijan and Armenia, having tipped the balance in favor of its Azeri allies by providing them with military advisers, technical assistance and armed drones.

Eyeing a foothold in the Caucuses, Ankara aims to influence the array of solutions to the conflict, arguing that the current mediators — the Minsk Group of the Organization for Security and Cooperation in Europe (OSCE), co-chaired by Russia, France and the United States — have failed to achieve any progress since 1994. Much like a surrogate of the Azeri government, Ankara has conditioned a cease-fire on “Armenia’s withdrawal from the territories it occupies” and questioned the merits of the Minsk Group. Azeri President Ilham Aliyev asserted Oct. 6 that Turkey “should be part of the settlement process” in Nagorno-Karabakh, while praising the efficiency of Turkish drones.

Based on the Turkish-Azeri messages, one could make the following deductions on their calculus in the conflict:

The objective of Azerbaijan and Turkey is a full military seizure of Nagorno-Karabakh, not only the seven surrounding occupied districts, for a number of factors. Above all, Russia has adopted a very cautious attitude in the Caucasus, burdened with other conflicts in Syria, Libya, Ukraine and Crimea. The United States, meanwhile, is preoccupied with its presidential elections, while the European Union has lost its diplomatic weight and Armenia has failed to muster the desired support from the international community.

Protracted fighting, however, could produce unwanted military, humanitarian, economic and diplomatic costs for Baku and Ankara and force them to reconsider their postures. Thus, a return to the negotiating table could become inevitable after a few partial victories in southern areas such as Jabrail and Fuzuli. In a sign that Baku is approaching that point, Aliyev urged Yerevan Oct. 4 to set a timetable for pulling out from Nagorno-Karabakh and surrounding Azeri territories, setting a somewhat softer condition for a cease-fire than Ankara. Turkish Foreign Minister Mevlut Cavusoglu’s Oct. 6 visit to Baku is another sign that the way for diplomacy is slowly being opened.

The main goal of Turkey’s whatever-it-takes posture is to insert itself into the power equation in the Caucasus, in addition to extracting concessions from Russia in the Syrian and Libyan conflicts. Ankara might try to fully discredit the Minsk Group and replace it with a new settlement platform led by itself and Moscow.

During his visit to Baku Cavusoglu played down international cease-fire calls, saying, “And what next? What was the use of previous cease-fires? Are you able to tell Armenia to withdraw immediately from Azeri soil? Are you able to work out a solution to ensure its withdrawal? No, you are not.” The Minsk Group members “have lumped the occupier and the victim together,” he charged, urging “the whole world” to acknowledge that “things cannot go on like this.”

A Turkish-Russian dialogue mechanism based on the Astana, Sochi and Moscow accords has proved viable in Syria, and an undeclared dialogue is underway between the two in Libya. The same model, Ankara hopes, could be replicated in the Caucasus. If not, a push to expand the Minsk Group to include Turkey might be considered as a next step. Such a move, however, would be rather questionable since Turkey would claim a mediation role after openly taking sides in the conflict, not to mention Erdogan’s irritation with the involvement of France.

As for the Russians, they should feel they have lost all their ability and options of intervention to agree to share influence with the Turks in a region where they have held sway for two centuries. The significance of a Turkish comeback to the Caucasus goes beyond the Nagorno-Karabakh issue, evoking the 1990s, when Ankara took close interest in the Chechnya war and the Caucasus in general following the collapse of the Soviet Union. The transfer of militants from Syria to Azerbaijan appears to have fueled such fears. Russia’s foreign intelligence chief warned Oct. 6 against the region “becoming a new launch pad for international terrorist organizations, from where militants could later cross into states that neighbor Azerbaijan and Armenia, including Russia.” His remarks suggest that Moscow is already assessing direct risks to its territory.

Still, a number of factors suggest that Putin could be forced to find middle ground with Erdogan.

First, Russia cannot ignore the risk of the war spilling over into Armenia. In such a scenario, Yerevan would certainly bring up the “one for all, all for one” principle of the Russian-led Collective Security Treaty Organization. Belarus, the only group member with significant military might other than Russia, is already mired in domestic turmoil.

As long as the clashes remain confined to Nagorno-Karabakh, Russia is able to play big brother without directly intervening. By spilling over into Armenia and Azeri cities beyond the line of contact, the war might draw Turkey in. As a result, the crisis might grow into a NATO issue, which, for Russia, is another nightmare scenario.

Furthermore, Ankara appears emboldened by a perceived decline in the control capacity that Russia inherited in the region from Soviet times. Turkey’s involvement on the side of Azerbaijan is limiting Moscow’s influence over Baku. Moscow’s ties with Yerevan, meanwhile, have been marred by mistrust since Armenia’s “velvet revolution” in 2018, which propelled Nikol Pashinyan to the presidency. Despite his desire to move Armenia away from Russian influence, Pashinyan has had multiple calls with Putin since the clashes in Nagorno-Karabakh flared up in late September, acknowledging Yerevan’s need for Russian protection. He has voiced confidence that Russia would fulfil its “treaty obligations” if need be while declaring readiness for “mutual concessions” with Azerbaijan. Yet Baku appears free of a similar sense of being cornered, which makes it harder for Moscow to step in.

Last but not least, Putin needs to consider the extensive commercial interests that Russian energy giants Gazprom, Transneft and Lukoil have in Azerbaijan.

All those factors are pushing Putin to tread cautiously while strengthening Erdogan’s hand.

Stuck in a complex equation and irked by Turkey’s quest for a role in the Caucasus, Russia eventually stepped up contacts within the Minsk Group, signaling that it is reluctant to consider an alternative bilateral format with Turkey. The Minsk Group appears to be Putin’s preferred option not only to deny Turkey influence, but also to warm its ties with the West. It would mark a divergence for Moscow, which has seen the “color revolutions” in former Soviet lands as Western-backed attacks on the Russian hinterland. Tellingly, Russia sought to undermine the UN, EU and OSCE missions in Abkhazia and South Ossetia after its five-day war with pro-West Georgia in 2008.

Is Putin willing to return to the pre-2008 climate? Can Putin see Western involvement in the Caucasus as a lesser evil than opening room to Turkey’s ambitions?

Failing to talk Baku into a cease-fire might open the door to the scenarios Russia fears. Alternatively, overcoming the deadlock could become easier if Aliyev can tell his people a success story and show that the status quo has been changed, even partially. To achieve that, Putin will have to upset Armenia somewhat.