Having brokered a cease-fire deal between Azerbaijan and Armenia, Vladimir Putin is now giving priority to the development of transport links in the conflict-ridden region. 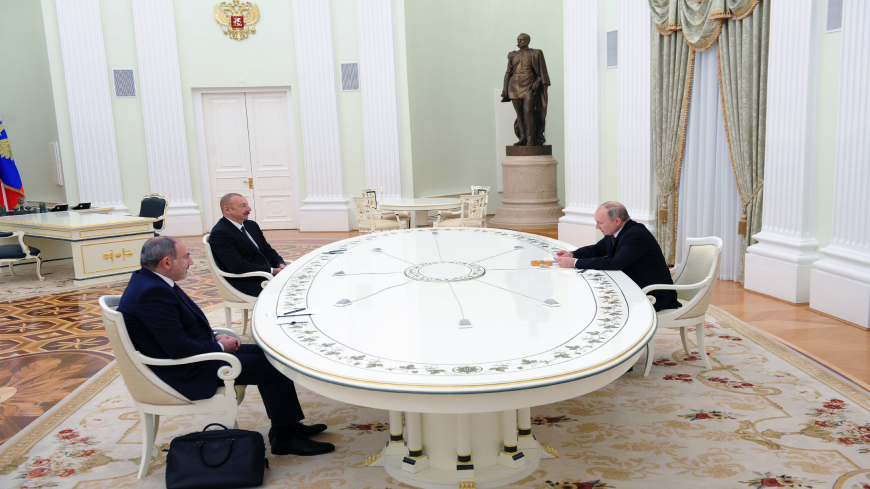 The first meeting between the leaders of Azerbaijan and Armenia after their six-week war over Nagorno-Karabakh last year has clearly shown that Russia is rebuilding its leadership in the Caucasus, leaving little room for Turkey, which helped Azerbaijan prevail on the battlefield.

Russian President Vladimir Putin hosted Azerbaijani President Ilham Aliyev and Armenian Prime Minister Nikol Pashinyan Jan. 11, two months after he brokered a cease-fire deal to end the clashes. Aliyev and Pashinyan, who only exchanged cold greetings without shaking hands, were seated wide apart on the same side of an oval table as Putin sat opposite them in the manner of a problem-solving boss raining instructions.

In Turkey, social media was awash with comments questioning the absence of President Recep Tayyip Erdogan, who claims a role both “in the field and at the table” in regional conflicts. Such questions, however, are futile, as the history and nature of conflicts in the Caucasus as well as Armenia’s reliance on Russia and Azerbaijan’s political and economic bonds with it accord Moscow an exceptional role in any confrontation or peacemaking in the region. Yerevan rejects Turkey’s involvement in the post-war process, but Moscow, too, is keeping Turkey away, irked by its ambitions in Russian domains of influence.

For the same reason, Putin seeks to diminish the role of the United States and France, Russia’s fellow co-chairs of the so-called Minsk Group created in the 1990s to lead settlement efforts in Nagorno-Karabakh. The sidelining of the two Western powers is a source of concern for Armenia but a welcome development for Azerbaijan and Turkey. Prospective talks on a lasting solution in Nagorno-Karabakh might shift to the Minsk framework eventually, but things remain uncertain at present.

To influence the process, the greatest leverage for Turkey might come from a brave move toward normalization with Armenia, but such a step remains a distant prospect. Ending the Armenian occupation of Nagorno-Karabakh was the condition Erdogan put on the reconciliation protocols that Ankara and Yerevan signed in 2009 but failed to implement. That condition has now become void, but instead of playing the normalization card to gain influence, Erdogan is counting on Aliyev’s gratitude for Ankara’s military-technical support during the war.

Paradoxically, Turkey’s efforts to increase its influence in the Caucasus have been helping Russia to reestablish itself in the region. The war in Nagorno-Karabakh resulted in the deployment of 2,000 Russian soldiers as part of a peacekeeping mission, which could pave the way for a Russian military base down the road. Russia has gained a position that enables it to maintain the status quo in Nagorno-Karabakh as the region’s final status remains unresolved. The Armenians now depend on Russia as a guarantor of the so-called Lachin corridor that connects Nagorno-Karabakh to Armenia.

Aliyev may be all smiles since the Nov. 10 cease-fire, but critical Azeri observers note that Baku has failed to reestablish sovereignty over Nagorno-Karabakh, leaving it to the control of Russian peacekeepers; that displaced Azeris are unable to return to the enclave confidently; and that the crucial Agdere-Kalbajar highway remains closed.

Armenia, meanwhile, is unhappy that a provision on missing persons and exchange of captives is still outstanding, atop its humiliation in the war and the deferral of Nagorno-Karabakh’s status.

Russia, for its part, wants the two sides to look at the full half of the glass: The war is over, and 48,000 people have returned to their homes in Nagorno-Karabakh. For Moscow, the process remains on track, and it is now time to focus on the economic recovery and reconstruction of the region. Infrastructure projects and transport links emerged as a primary objective from the trilateral meeting in the Kremlin.

According to the joint statement, Russia, Azerbaijan and Armenia will establish a joint working group, co-chaired by deputy premiers, to draw up a blueprint for the development of transport links in the region by March 1. The first meeting of the group is scheduled for Jan. 30.

Turkey was not even mentioned in the statement, though it has to do with the issue. Turkey shares a tiny border with the autonomous republic of Nakhchivan, an Azeri enclave separated from the mainland by a strip of Armenian land. The cease-fire deal had called for transport connections between Azerbaijan and Nakhchivan, spurring Turkish dreams of gaining a “strategic corridor” to the gas- and oil-rich Caspian basin and Central Asia.

Aliyev has repeatedly said the transport links will benefit not only Azerbaijan, Armenia and Russia, but also Turkey and Iran. On Jan. 7, for instance, he said that Azerbaijan would gain access to the Turkish market via Nakhchivan, that a railway link would be established between Turkey and Russia, and that Armenia would gain rail connections to Russia and Iran via Azerbaijan.

Such projects will undoubtedly face challenges in Armenia, where the outcome of the war has led to political turmoil and still-simmering public anger with Pashinyan.

Among transport projects, the focus is on the corridor from mainland Azerbaijan to Nakhchivan through the 42-kilometer (26-mile) strip that the Armenian district of Zengezur forms between them. For years, Azeri mainlanders have been forced to travel to Nakhchivan via Iran and to Turkey via Georgia.

In return, Armenia could gain new land routes to Russia via Azerbaijan as an alternative to the existing link via Georgia, which is often disrupted by heavy snow, rain and landslides at Verkhny Lars, the only border crossing between Georgia and Russia. The frequent closures of the crossing exact a hefty economic toll on Armenia as 80% of its cargo traffic relies on that route. Russia could also benefit from an alternative road, especially in terms of military shipments, depending on Baku’s agreement. Georgia currently denies Russia permission to ship military equipment to its bases in Armenia.

There is much anticipation for the revival of old rail links as well. Aliyev has already ordered work to begin on the railway to Nakhchivan and is considering an extension to the railway linking Baku; Georgia’s capital, Tbilisi; and the eastern Turkish city of Kars in order to connect it to Nakhchivan.

The overhaul of old railways — many sections are broken, dilapidated and even mined — will allow also the rail networks of Turkey, Iran and Russia to interconnect.

All those plans evoke the revival of imperial routes of conquest and invasion. A railroad from Tbilisi to Kars was part of the trans-Caucasian railway that the Russians built in the second half of the 19th century and later extended to Sarikamis and Erzurum, both part of Turkey today. Russia held the Kars region for four decades after the 1878 Treaty of San Stefano sealed the Ottomans’ defeat in a two-year war with Russia. In 1921, the Treaty of Kars established Turkey’s border with Azerbaijan, Armenia and Georgia, which became part of the Soviet Union by then. Thanks to an agreement signed the following year, the railroad linking Tbilisi and the Armenian city of Gyumri to Kars became the Soviet Union’s gateway to the West. In 1993, after the Armenian occupation of Nagorno-Karabakh, Turkey shut its border with Armenia in a show of solidarity with Azerbaijan, also disrupting the railroad. A plan to reopen the 877-kilometer Kars-Baku rail link running through Nakhchivan and Armenia was part of the failed Turkish-Armenian normalization deal in 2009. Eventually, Azerbaijan, Georgia and Turkey teamed up to revive the Baku-Tbilisi-Kars route, excluding Armenia.

The rail network of imperial Russia involved also a route from Nakhchivan to Iran via Armenia, which was extended to Baku in the 1940s. In 2013, Yerevan struck a deal with the state-owned Russian Railways company and a Dubai-based firm to reconstruct the route to Iran, but the $3.5 billion project failed to take off due to financial snags. Following the cease-fire deal with Azerbaijan, Pashinyan expressed hope of using the Iranian route via Nakhchivan.

The transport projects, however, abound with uncertainties. How will their security be ensured? Who will finance them? Will Armenia and Azerbaijan benefit equally? To what extent will Turkey and Iran be involved?

Aliyev’s approach on the issue shows that things could easily run into trouble. “Given that Armenia’s railways are owned by Russian Railways, our interlocutor is Russia, of course,” Aliyev said ahead of the trilateral meeting in Moscow. In reality, however, a subsidiary of Russian Railways holds the operational rights of Armenia’s railways under a 30-year contract signed in 2008, which does not preclude Armenia’s sovereign rights.

The transport projects are, no doubt, incentives for peacebuilding, but there is still a conflict potential that might disrupt the efforts or cause the closure of reopened links. Russia again will be the safeguard here. Putin’s assertion that the deals will serve Russia’s interests as well is not without reason.