How realistic are Turkey’s ambitions over strategic corridor with Azerbaijan

Turkey is pinning high economic hopes on a transport link that would connect it to Azerbaijan and beyond, but Russia and Iran have caveats and the viability of Turkey’s projects are open to question. 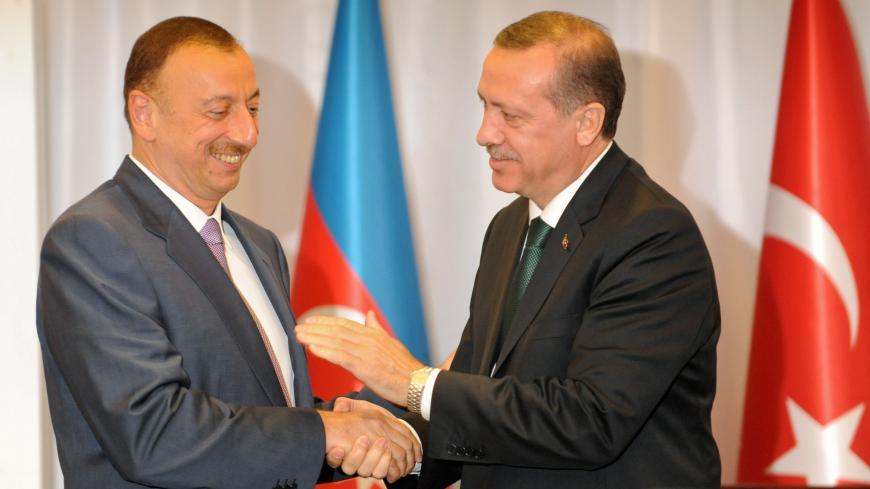 Having agreed a joint military center with Russia to monitor the cease-fire in Nagorno-Karabakh, Turkey is now eagerly awaiting the next step under the deal between its ally Azerbaijan and Armenia — the opening of a transport link that Ankara frames as a “strategic corridor” promising Turkey big economic gains and further influence in the region.

The Nov. 10 deal, brokered by Russia, calls for the opening of transport connections between Azerbaijan and the Nakhchivan Autonomous Republic, an Azeri exclave that is separated from the mainland by a strip of Armenian land and shares a tiny border with Turkey.

Ankara is brimming with enthusiasm about gaining a gateway all the way to China, even though the provision is rather ambiguous and not everyone in the region seems to share its excitement.

The provision reads, “The Republic of Armenia shall guarantee the security of transport connections between the western regions of the Republic of Azerbaijan and the Nakhchivan Autonomous Republic in order to arrange unobstructed movement of persons, vehicles and cargo in both directions. The Border Guard Service of the Russian Federal Security Service shall be responsible for overseeing the transport connections.”

According to Azeri President Ilham Aliyev, the provision heralds “a new transport corridor” in the region. “Azerbaijan is linking up with Turkey. Russia, Azerbaijan, Turkey, Iran and the Armenians — if they wish — could join this corridor,” he said Dec. 1, adding that Turkish President Recep Tayyip Erdogan and his Russian counterpart Vladimir Putin had both welcomed the idea for such five-sided cooperation.

Moscow, however, has displayed little interest publicly. Asked about Aliyev’s comments, Kremlin spokesman Dmitry Peskov declined to comment, saying only that Putin and Aliyev had discussed the unblocking of transport links in the area.

Still, an upbeat perspective prevails in Turkey that the country will gain a strategic gateway to the Caspian basin, the Turkic republics in Central Asia and China amid the prospect of new pipelines and railway and road projects in the region. Some hope Turkey’s plans will be further bolstered by the “uncompromising policy” US President-elect Joe Biden’s administration would pursue against Russia.

The main points driving those dreams could be summarized as follows:

The pro-government daily Sabah was even bolder in its predictions. The corridor between Nakhchivan and Azerbaijan “has opened a strategic trade and energy route that will take Turkey to the shores of the Pacific,” it wrote Dec. 2. “The energy and trade equation will change fundamentally. The door to a gigantic market of 3 billion people will open wide for Turkey.”

Turkey’s dreams, however, are Iran’s worries. For years, Iran has served as an alternative land link between Nakhchivan and Azerbaijan, making profits and gaining influence over Baku. Iran is now wary of losing that leverage.

According to the Iranian online journal Mashreq, Iran earns a 15% commission from Azerbaijan’s gas supplies to Nakhchivan. It serves also as a route for Turkish exports to Central Asia. An average of about 12,000 Turkish trucks use the route monthly, with Iran charging passage fees of up to $800 for their 1,800-kilometer (1,120-mile) journey to the Turkmenistan border. Those revenues could now decline.

For Iran’s Javan daily, Turkey is threatening the geopolitical interests of both Iran and Russia in line with Washington’s strategy; hence, Tehran “will not accept such a corridor.”

The merits of Ankara’s strategic calculus aside, the more pressing question is how Russia and Armenia will view the planned corridor, which runs through Armenian territory — the 42-kilometer (26-mile) strip that the district of Zengezur forms between Nakhchivan and Azerbaijan. Yerevan has yet to vocally state a position, still reeling from its defeat against Turkey-backed Azerbaijan in Nagorno-Karabakh.

According to American Armenian analyst Richard Giragosian, “The nature of such an Azerbaijani connection through Armenian territory remains dangerously unclear and undefined, raising questions over sovereignty, legal standing and policing.” Because of such ambiguities and other issues, he sees “an obvious need for direct negotiations and further agreements.”

The status of Nagorno-Karabakh — left unaddressed in the deal — is the primary snag for Turkey’s corridor ambitions. The parties have yet to hammer out a lasting settlement to ensure peace in the region. Expecting Armenia to allow the free use of its territory before such a settlement is reached does not seem realistic.

Second, normalizing ties with Yerevan could become a precondition for Ankara to advance its ambitions. Ending the Armenian occupation of Nagorno-Karabakh was the condition Erdogan put on the reconciliation protocols that Ankara and Yerevan had signed in 2009 but failed to implement. Keeping Turkish-Armenian relations off the table could prove difficult in any negotiations on the corridor plans.

Even this, however, would not close the big gap between Ankara’s overblown strategic ambitions and the realities of the region.

To start with, Azerbaijan, Turkmenistan and Kazakhstan are not exactly scrambling for pipelines to meet some extraordinary energy demands. Similarly, Turkish manufacturers are not desperate for transport means to meet some sort of a boom in Central Asian demand for Turkish goods.

Moreover, will Russia acquiesce to rival projects in the Caspian? Russian energy giants such as Gazprom, Transneft and Lukoil are doing business in Azerbaijan. The Russians hold a stake in Azerbaijan’s state-owned energy company SOCAR, which, in turn, holds a stake in the Russian oil refinery Antipinsky. And criticism is on the rise in Russia that Moscow has already given too many concessions to Turkey. Political commentator Konstantin von Eggert, for instance, said he believes that the outcome in Nagorno-Karabakh is “a geopolitical catastrophe” for Moscow and that “Turkey has gained a very important foothold in the region.” Along with Turkey, regional players such as Iran and China may be now emboldened to “further muscle into the region, in Central Asia and in South Caucasus, without consulting too much with Moscow or fearing repercussions from the Kremlin,” he said.

Furthermore, Azerbaijan’s Caspian neighbors are using Russian conduits for energy supplies to Europe and increasingly turning to China for long-term partnerships. The downtick in Europe’s energy demand, coupled with China’s promise of large-scale purchases, diminishes the prospects for conduits running through Turkey, which include the Baku-Tbilisi-Ceyhan oil pipeline and the Baku-Erzurum gas pipeline, along with the Trans-Anatolian Natural Gas Pipeline.

For Turkish energy expert Muhdan Saglam, Turkey’s attitude is “overly optimistic” and ignores Turkmenistan’s ties with China as well as Russian and Iranian interests in the Caspian. “They say the gas flow could increase to 32 billion cubic meters, but with whose gas? Azerbaijan’s capacity is inadequate, while Turkmenistan is working with China … and lacks such a perspective. They are all looking to the Asia-Pacific,” Saglam told Al-Monitor.

Moreover, she said, Europe has no supply shortage; to the contrary, its demand is shrinking. “At best, some of the shipments to Russia might be rerouted. For that, a new conduit is needed from Turkmenistan to Azerbaijan to connect to” the Trans-Anatolian Natural Gas Pipeline, she added.

Referring to hopes of reviving the trans-Caspian subsea pipeline project between Turkmenistan and Azerbaijan, Saglam said its cost had already proved discouraging, while Turkmenistan’s overall approach is “to have a problem-free partnership with China and not irk Russia.” Furthermore, Turkmenistan is focused on increasing the capacity of its gas pipeline with China, she added.

The enthusiasm for new railways is similarly open to question as the existing Baku-Tbilisi-Kars route has yet to gain any strategic weight. Which countries will use those transport links and for what purposes remains unclear. And while Turkey puts those projects in the context of a modern-day Silk Road, it lacks a prominent role in China’s sprawling Belt and Road initiative.