Many hurdles remain for Turkey-Armenia reconciliation

As normalization with Armenia remains crucial for Turkey’s broader regional aspirations, there are still major political and psychological stumbling blocks before the process. 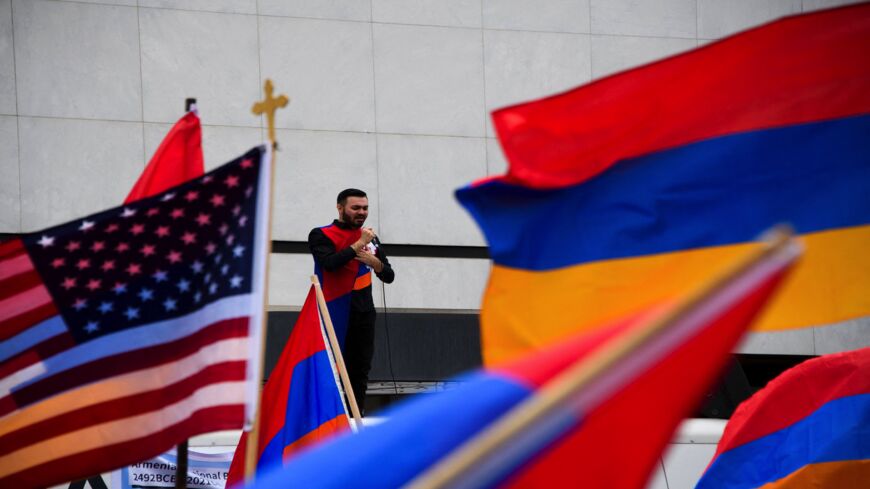 Armenian singer Andre Hovnanyan performs as people protest outside of the Turkish Consulate on the anniversary of the Armenian genocide in a demonstration organized by the Armenian Youth Federation on April 24, 2021, in Beverly Hills, California. - PATRICK T. FALLON/AFP via Getty Images

Desperately scrolling through foreign policy titles to alleviate its mounting domestic and foreign woes, Turkey is initiating a new opening with Armenia, aiming to turn decadeslong hostility into hospitality.

Turkey and Armenia have mutually appointed special envoys as the first step in reinstating the ties severed in 1993. This will be followed by the resumption of charter flights between Istanbul and Yerevan.

The envoys are expected to lay out a road map for the normalization process. Turkey had recognized Armenia after it gained independence from the Soviet Union in 1990 but stopped short of establishing diplomatic relations. Following the occupation of Kalbajar by the Armenian forces in 1993, Turkey sealed off its borders with its eastern neighbor, closing off its land and air borders in solidarity with Azerbaijan. While air borders were reopened in 1995, the land borders remain sealed off.

Establishment of diplomatic ties and unlocking the borders are of critical significance for Ankara to realize its strategic aspirations in the South Caucasus and beyond. Normalization may also help Turkey to repair its tarnished image in the eyes of European and US capitals over Ankara’s military involvement in the Nagorno-Karabakh clashes last year.

But not everybody is on board, with some in Yerevan infuriated with the plan. The Turkish military support that helped Azerbaijan recapture seven occupied areas in Nagorno-Karabakh evoked historical enmity toward Turkey in some minds.

As the Armenian public was trying to reel off from the deep resentment and disappointment over the defeat, Ankara has lost no time in unveiling its aspiration to turn the Azeri-Armenian cease-fire deal into a design that would allow Turkey's political and economic expansion toward the Caspian basin and Central Asia through transportation links and pipelines.

The design rests on setting up a corridor linking Turkey directly to Azerbaijan through the autonomous Azerbaijani exclave of Nakhchivan along the Turkish border. According to the Russian-brokered Nov. 9 cease-fire deal, Armenia has to allow the construction of the corridor across its southernmost province of Syunik, known also as Zangezur.

In a bid to secure Yerevan’s willingness, Moscow’s facilitating role and thwart regional rivalries jeopardizing its strategy, Ankara proposed to form a six-way cooperation platform that involves Azerbaijan, Armenia, Georgia, Russia, Iran and Turkey. Turkish and Armenian diplomats along with their Azeri, Iranian and Russian counterparts gathered in the platform’s first meeting held in Moscow on Dec. 10, days before the normalization plan was unveiled.

Turkey had engaged in a normalization process with Armenia in the past aiming to prevent the Armenian genocide issue from hampering Ankara’s back-then friendly ties with the Western capitals. Yet the two normalization agreements signed between Yerevan and Ankara in Zurich in 2009 following many rounds of secret talks had been shelved after Erdogan assured Baku that the deals would not be implemented until Armenia withdrew from the contested territories in Nagorno-Karabakh. The Armenian side also suspended the ratification process in 2010. The agreements were declared “void” in 2018. Under the agreements, the borders between the two countries were to be opened within two months after the ratification of the agreements.

Now the new round of efforts aims to smooth over Ankara’s strained ties with the West.

Normalization efforts appear to be a rare positive agenda item between Ankara and Western capitals. US Secretary of State Antony Blinken said that they “welcome and strongly support” the move. Turkey’s ties with Armenian were standing out as one of the contentious points in the Ankara-Washington line following President Joe Biden’s recognition of the Armenian genocide. Citing a Turkish official, Bloomberg reported that Biden encouraged Erdogan to open Turkey’s borders with Armenia during the two leaders’ meeting in Rome.

Armenian President Nikol Pashinyan’s calculus, meanwhile, seems to be resting on the opening of the borders in a bid to strengthen his country’s economy and eventually diminish the nation’s dependence on Russia. Yet it remains unanswered to what extent Yerevan can distance itself from Moscow, as the former still depends on Russian forces on the ground to maintain security in Nagorno-Karabakh and keep the Lachin corridor linking Armenian-controlled Nagorno-Karabakh regions to the mainland open.

The normalization move seems to be in line with calculations of the European Union, which is seeking to gain a foothold in the region. After failing to restrain Moscow’s ambitions in Ukraine, the West was also on the sidelines as Russia deployed a peacekeeping mission in Nagorno-Karabakh, increasing its influence in the South Caucasus. As Russia — one of the co-chairs of the Minsk Group of the Organization for Security and Cooperation in Europe, along with France and the United States — mediated a truce between the warring parties, Washington and Paris were sidelined as well as other Western powers.

Both the South Caucasus platform and trade routes linking Armenia to Russia via Azerbaijan could be seen as achievements that would further consolidate Moscow’s hold in the region. Russia’s hosting of the platform’s first meeting has also underlined Moscow's role.

Renewed normalization efforts come at a time when Western capitals have shifted their focus to the region again, aiming to curb Russian ambitions amid tensions over Ukraine. EU Council President Charles Michel hosted Pashinyan and Azerbaijan President Ilham Aliyev in a trilateral summit in Brussel on Dec. 14. The Azeri and Armenian leaders also held a one-on-one meeting on the sidelines of the summit. According to a statement by the council, the two leaders agreed on initiating negotiations on the delimitation and demarcation of the state borders and restoration of railroads. The EU also pledged “technical assistance to both countries” to support the talks.

The two leaders also agreed to make border and customs control arrangements based on the “principle of reciprocity,” while disagreements over land roads have been left for the next round of talks. Reciprocity was a condition demanded by Aliyev in response to Pashinyan’s plans to set up custom points around Syunik.

Following the meeting, Pashinyan said Armenia would receive railway access to Iran and Russia, adding that relaunch of the railways would be based on internationally accepted border and customs regulations.

He also stressed the transportation lines will remain under the authority of the countries. While Turkey describes the link connecting Nakhchivan to Azerbaijan as a “corridor,” Pashinyan’s remarks prioritize the relaunch of existing transportation lines and underline Yerevan’s sovereignty on these lines.

Meanwhile, Baku seems in no rush to fully normalize its ties with Yerevan, unlike Ankara, which is hard-pressed for a positive agenda item. Announcing the normalization efforts on Dec. 14, Turkish Foreign Minister Mevlut Cavusoglu signaled caution, stressing that Turkey would “coordinate” every step with Baku.

Leaving some room for Ankara to maneuver, Pashinyan expressed his country’s readiness for dialogue without “any precondition.”

Despite the exciting steps, prospects seem far from certain. Nagorno-Karabakh may no longer be an obstacle to Armenian-Turkey normalization, yet political and psychological stumbling blocks remain intact.

The most contentious issue between the two countries appears to be the recognition of the Armenian genocide. In a bid to avoid the issue becoming an impediment, the two sides had agreed in 2009 to set up an international commission to investigate the massive killing and deportation of hundreds of thousands of Armenians by the Ottoman Empire in 1915.

Domestic opposition in both countries stands as another potential derailing factor, with the Armenian opposition being particularly vocal. Claiming that Turkey was “wishing to destroy the Armenian state,” opposition lawmaker Tigran Abrahamyan warned the government of “devastating consequences.” Armenian Foreign Minister ​​Ararat Mirzoyan’s remarks about some preconditions that Turkey was seeking has provided further ammunition to the opposition. In an interview with Le Figaro, Mirzoyan said Turkey set “new conditions” including the corridor linking Turkey to Azerbaijan. Still, Pashinyan's victory in the June 2021 elections provided the president with sufficient confidence to signal positive messages to Ankara.