The terms of the Russian-sponsored deal between Azerbaijan and Armenia speak of Moscow’s reluctance to let Turkey increase its influence in the region. 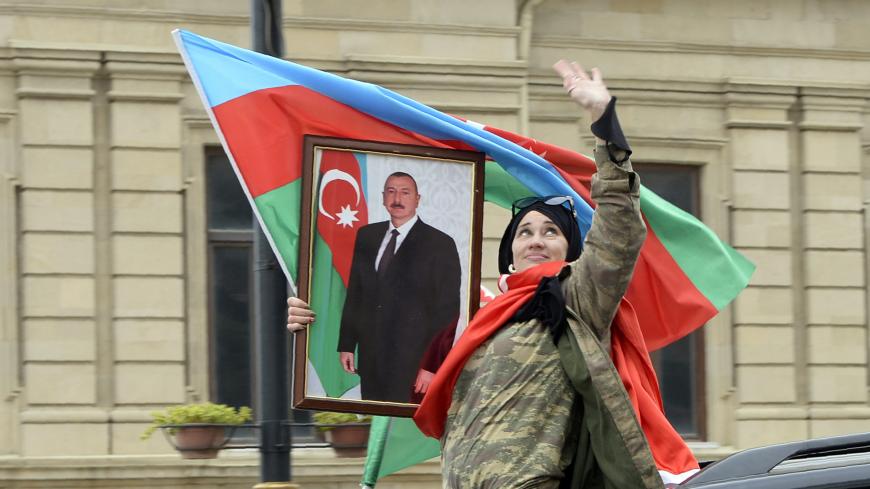 A woman holds the national flag and a portrait of Azerbaijan's President Ilham Aliyev as people celebrate in the streets of the capital Baku on Nov. 10, 2020, after Armenia and Azerbaijan agreed a cease-fire following a string of Azeri victories in fighting over the disputed Nagorno-Karabakh region - TOFIK BABAYEV/AFP via Getty Images

Azerbaijan and Armenia have agreed to end hostilities in the disputed region of Nagorno-Karabakh under a Russian-sponsored deal that sidelines the United States and Europe from settlement efforts and leaves little diplomatic say to Turkey despite its military support for Azerbaijan.

The agreement, announced in the wee hours of Nov. 10, allows Azerbaijan to retain areas of Nagorno-Karabakh that it has recaptured in clashes since Sept. 27 and requires Armenia to hand over several adjacent areas over the next few weeks.

Under the deal, the Agdam region and Armenian-controlled areas in the Kazak region would be returned to Azerbaijan by Nov. 20. A Russian peacekeeping force comprised of 1,960 troops, 90 armored vehicles, 380 other vehicles and special equipment would deploy along the line of contact in Nagorno-Karabakh and along the so-called Lachin Corridor, the main road from Nagorno-Karabakh to Armenia, under a five-year mandate that is automatically renewable if neither side objects six months in advance.

Other areas Armenia would return to Azerbaijan include Kalbajar, to be handed over by Nov. 15, and the Lachin region by Dec. 1, excluding the five-kilometer (three-mile)-wide Lachin Corridor. Shusha — Nagorno-Karabakh’s second-largest city, which Azeri forces seized Nov. 8 — would remain in Azeri hands. A new road linking Stepanakert, Nagorno-Karabakh’s largest city, to Armenia would be constructed in three years in the Lachin corridor. Azerbaijan, meanwhile, would gain passage to the Nakhchivan Autonomous Republic, an Azeri exclave separated from the mainland by a strip of Armenian land, and the link would be controlled by Russian border guards.

Two factors sped up the signing of the deal, which Moscow has been cooking for at least two weeks. First, the Azeri military shot down a Russian helicopter flying in Armenian airspace near the border with Nakhchivan Nov. 9, killing two crewmen and injuring one. Baku immediately stated the helicopter was hit by mistake, apologized and offered to pay compensation. The downing turned up pressure on Baku to accept the deal, which Moscow had presented days before.

Otherwise, things were going rather well for Azerbaijan on the battlefield. Azeri forces boosted by Turkish military support and Israeli-made weapons had recaptured about 30% of Nagorno-Karabakh’s territory of some 12,000 square kilometers (4,600 square miles), including 300 out of about 900 settlements, mostly rural areas in the south of the enclave near the Iranian border.

Lately, the clashes had been shifting to the critical Lachin-Shusha-Stepanakert axis. The prospect of fighting in such densely populated areas threatened to drive up the civilian death toll and spark refugee waves as winter approached, the second factor that precipitated the deal.

Azerbaijan markedly outstrips Armenia in terms of defense budget and military personnel, according to data by the Stockholm International Peace Research Institute. In 2019, the country had a defense budget of $1.8 billion and a 60,000-strong army, while Armenia’s respective figures stood at $644 million and 44,000 troops.

Judging by the losses of the two sides, the Azeris seem to have clearly prevailed on the battlefield. According to local news reports, the Armenian military has lost about 100 main battle tanks, some 50 armored combat vehicles and personnel carriers, about 70 howitzers, 60 multiple launch rocket systems, about 20 air defense systems and more than 400 trucks since Sept. 27. The Azeri forces, meanwhile, have lost 20 tanks, about 10 howitzers and multiple launch rocket systems, nearly 50 trucks and about 20 drones. The figures, based on corroborative footage and photographs, suggest the Armenian army has lost nearly 35% of its inventory in terms of tanks, artillery and trucks. As for the death toll, local sources put Armenia’s losses at up to 5,000, or about 10% its standing army. Azerbaijan, meanwhile, has lost about 1,200 men, according to official statements.

In sum, Armenia took a heavy blow, which is likely to have lasting consequences for its already impoverished people and ailing economy and even impact the geopolitics of the region.

The cease-fire deal was, in a sense, Moscow’s kiss of life for Yerevan before the Armenian army faced total collapse. Armenian Prime Minister Nikol Pashinyan described the deal as “incredibly painful,” admitting that military leaders had advised him to accept the truce because “our resources were exhausted.”

A curious aspect of the deal requires one to distinguish between winners and losers both on the battlefield and at the negotiating table. Azerbaijan and Turkey were the winners on the ground, but Russia and Azerbaijan have emerged as the winners at the negotiating table. Turkey’s diplomatic gains appear dubious. Azeri President Ilham Aliyev mentioned a role for Turkey in monitoring the cease-fire, but Moscow was quick to assert that only Russian peacekeepers would be deployed.

For Moscow, the deal realizes a 2018 proposal to deploy Russian peacekeepers in Nagorno-Karabakh, which both sides had rejected at the time. It amounts to Russian control of Nagorno-Karabakh’s most populous and economically developed region and puts an end to the enclave’s status as an Armenian-run territory.

Through the deal, Moscow is effectively freezing the conflict again, but Baku is happy with the gains it has made. Aliyev achieves a short-term solution that pleases the Azeri public and strengthens his hand in domestic politics. He can easily sell the deal as a military victory. Baku’s hand will further strengthen — both at home and internationally — once Azeri refugees who fled their homes when the conflict first erupted in the 1990s begin to return to Nagorno-Karabakh under the deal.

It is important to note, however, that durable peace still requires a lasting political settlement.

Yerevan is headed for tough times, being the loser both on the battlefield and at the table. The sense of wounded national pride could sharpen nationalist feelings among the Armenian people and turn up pressure on Pashinyan’s government. What is certain is that the deal has markedly increased Armenia’s dependence on Russia.

And what about Turkey? Turkish military support, along with Israeli arms assistance, was instrumental in tipping the scale in favor of Azerbaijan on the battlefield. Yet Turkish diplomacy seems to have little say on the negotiating table now. By helping Azerbaijan, Ankara pushed Yerevan firmly into Russia’s arms. In other words, it effectively subcontracted the job of undermining the West-friendly Pashinyan, whom Moscow has viewed with suspicion since he came to power after a “velvet revolution” in 2018.

Moreover, the planned corridor from Nakhchivan, which shares a tiny border with Turkey, to the Azeri mainland will be under Russian control as well, dampening Ankara’s hopes of using the route as a gateway to boost its influence in Azerbaijan and Central Asia.

Should the deal hold, its impact on any future normalization efforts between Turkey and Armenia is another question that deserves attention. In a show of solidarity with Azerbaijan, Turkey has kept its border with Armenia sealed and refused to establish diplomatic ties with Yerevan since the 1990s. Nakhchivan’s detachment from Azerbaijan has been a key point of contention in the conflict. Now that Russia is bringing a partial solution to the problem, could that encourage Ankara to renew normalization efforts with Yerevan? Such a prospect appears distant at present, but cannot be ruled out down the road after the clashes die down completely.

Cease-fire agreements are usually short-term arrangements, but successful ones stand the chance to evolve into lasting peace. And the Nagorno-Karabakh conflict is now headed for a long-term negotiation process that requires Ankara to handle the Nakhchivan issue in tandem with the issue of normalization with Yerevan. That’s how a durable peace could be achieved across the region. The latest deal suggests that the way to such peace will go through Moscow as well.