The Nagorno-Karabagh clashes between Azerbaijan and Armenia could evolve into a war of attrition, but none of the regional heavyweights want a conventional war in the region. 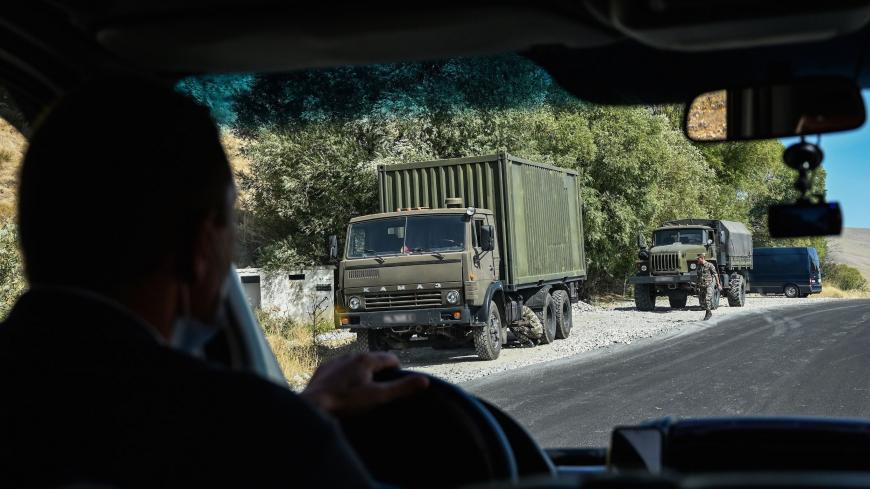 Military trucks are seen on the side of a road near the village of Zangakatun in Armenia on Sept. 30, 2020. - AFP via Getty Images

The fresh flare-up between Azerbaijan and Armenia, which began with mortar and artillery exchanges early Sept. 27 and became full-fledged drone warfare within hours, continued into its fourth day Wednesday. How the conflict will evolve is a crucial question in an energy-rich region where Russia, Turkey and Iran are major stakeholders with competing interests.

The scene of the clashes — the mountainous Nagorno-Karabakh region — has been occupied by Armenia since a war in the 1990s despite being officially recognized as part of Azerbaijan. The clashes have concentrated in Murov Mountain dominating the north of the region and the Fuzuli area near the Iranian border to the south.

Tensions at the Azeri-Armenian borders spiked in early summer, leading to clashes in another area, Tavush, which lies on the route of crucial energy conduits, in July. A flurry of military activity followed in the region, with Azerbaijan holding joint military exercises with Turkey and Armenian troops joining Russian military drills.

There are five main factors behind the flare-up:

As for the military situation on the ground, a pattern has emerged since the 1990s, including in the faceoffs in April 2016 and most recently in July, whereby clashes arise between Azerbaijan and Armenia and continue for several days before Moscow intervenes.

Curiously, Moscow has been atypically low key thus far in the latest flare-up. The Kremlin comes across as unwilling to bring Aliyev and Pashinyan to the negotiating table, while the Russian media is busy conducting back-to-back interviews with the two leaders.

The Azeri army is in an offensive military posture, but the difficult terrain and the coming winter conditions present an advantage for the defending Armenian forces. The Azeri military seems to be missing the opportunity for a blitzkrieg, displaying a rather slow operational pace. Ideally, by now it should have managed to take control of most roads leading to Stepanakert, Nagorno-Karabakh’s capital, and seize a couple of urban centers such as Terter, Agdam and Fuzuli.

Large armor-mechanized infantry maneuvers of corps size have yet to be seen on the battlefield, but both sides continue to reinforce their military buildups on the front lines. The Azeri military has been opening new fronts in a bid to force the Armenian forces to disperse. The Armenians, for their part, have been making use of their defensive position to rain artillery and rocket fire on the Azeri troops to slow and disconcert them. Meanwhile, kamikaze drones — a new element on the battlefield — have been hunting for high-value targets.

Air forces have been absent from the battlefield thus far, despite Armenia’s claim that one of its Su-25 jets was shot down by a Turkish F-16. Ankara has denied doing so. Without warplanes and attack helicopters, the Azeri army has failed to provide close air support to its ground forces to speed up their advance.

Similarly, there has been no military sign that either Armenia or Azerbaijan could use ballistic missiles, despite Armenian insinuations to the contrary. Armenia is in possession of Russian-made Iskander ballistic missiles with a range of up to 280 kilometers (174 miles), while the Azeri arsenal boasts Israeli-made LORA missiles with a range of up of 300 kilometers (186 miles).

From a political standpoint, it seems fair to assume that neither Armenia nor Azerbaijan can use air power and ballistic missiles without Russian consent. Apparently, Moscow has not given the nod — at least for now — to the deployment of warplanes and ballistic missiles, a step that marks the threshold of a conventional war.

The first is the presence of drones. The Azeri army is using Turkish-made TB2 armed drones and Kargu-2 kamikaze drones, which are bound to change the nature of the clashes in the Caucasus. The Armenian army has apparently taken substantial bruises from drone attacks, caught unprepared for drone warfare in positions and defense lines vulnerable to air assaults.

The second difference is the intensity of information wars and the role of social media. The Azeris are trying to showcase strength by circulating drone-strike videos on social media, while Armenia’s propaganda war has focused mostly on disseminating manipulative and deceptive reports aimed at generating Russian and Western support.

How the conflict could evolve? Like previous flare-ups, the clashes are likely to stop before long, probably within a week, following outside intervention, resulting first in a lull on the front lines and then an end to most military activity in the area. Here are the main reasons such a prospect makes sense:

The Caucasus is Russia’s backyard and Russia would like to prevent NATO from using a regional conflict to enter what it regards as its "near abroad." Therefore, it has an interest in not letting the clashes escalate to the level of a conventional military confrontation.

Turkey and Iran are both in the grips of economic crises and would like to avoid the repercussions of a regional war, including an increase in security costs, migration and the postponement of regional political and business initiatives. Turkey is keen to ensure the continuity of energy supplies from the Caspian basin.

Also, Turkey's wariness of any fallout on its relationship with Russia in the Syrian and Libyan conflicts requires it to keep the Nagorno-Karabakh conflict on the level of low-intensity distraction battles.

Some Turkish observers, however, believe that Ankara seeks to use the clashes in Nagorno-Karabagh as leverage to balance Moscow in Libya and Syria’s rebel-held province of Idlib. Some even suggest that the flare-up could lead to an Astana-like process, in which Moscow and Ankara would become equal mediators between Azerbaijan and Armenia. Yet, such expectations appear unrealistic, given the power asymmetry between Turkey and Russia as well as Russia’s established ways of geopolitical thinking and doing business in the Caucasus.

Moreover, the upcoming winter conditions, coupled with the harsh terrain, will limit large-scale military operations. Also, the crippled economies of both Azerbaijan and Armenia will not allow them to maintain a prolonged conventional military confrontation.

Still, the front lines might not freeze completely this time, unlike previous flare-ups between Armenia and Azerbaijan. The prospect of a lengthy war of attrition, with episodes of low-intensity conflict and proxy, drone and information warfare, cannot be ruled out.