Is Erdogan after a Caucasus adventure?

Ankara’s harsh outbursts in favor of Baku in Azerbaijan’s rekindled conflict with Armenia might be aimed at domestic consumption as well as pressuring Russia into concessions in Libya and Syria. 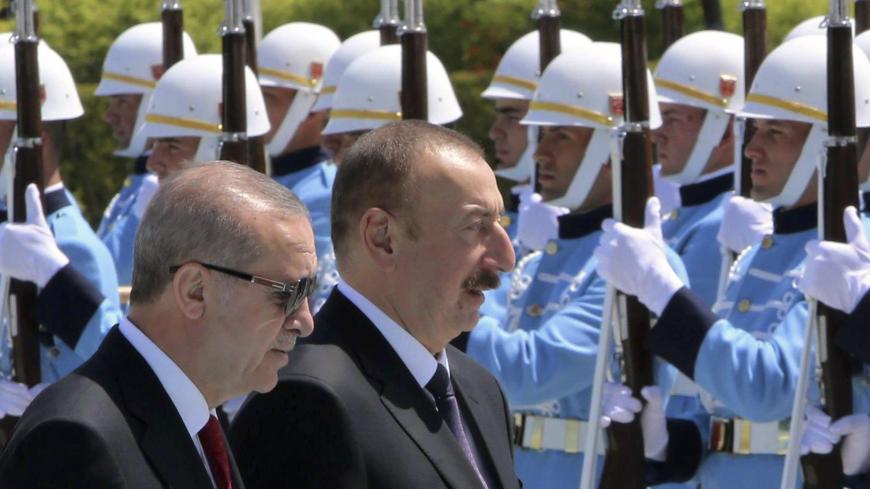 Amid flaring border clashes between Azerbaijan and Armenia since July 12, Turkey has used unusually tough language to assert its support for Azerbaijan, raising questions as to what its intentions might be in the long-running and complex conflict in the South Caucasus.

Foreign Minister Mevlut Cavusoglu has urged Armenia “to come to its senses,” pledging that Turkey will stand by Azerbaijan “with all its means.” Defense Minister Hulusi Akar has warned that the Armenians “will drown in the ploy they have started and will definitely pay for their actions.”

President Recep Tayyip Erdogan, for his part, seemed to imply that a foreign hand was behind the rekindled clashes, when he said July 14 that Armenia’s “deliberate offensive” was “an affair beyond Armenia’s caliber.” The purpose, he argued, is to block settlement efforts in Nagorno-Karabakh, the disputed enclave between Azerbaijan and Armenia, and “create new conflict zones” in the region.

Russia is the first power that Erdogan’s allusion brings to mind. Could it be that Moscow is seeking to create an extraordinary situation to reassert its influence over Yerevan, wary that Armenia might follow in Ukraine’s footsteps under Prime Minister Nikol Pashinyan, who came to power in 2018 after a “Velvet Revolution” and whom Moscow distrusts?

While Ankara spoke of a “ploy” without elaborating, Fatih Erbakan, the leader of a small Islamist opposition party, said Armenia was targeting Tavush, a region that lies on major energy and rail routes linking Azerbaijan, Georgia and Turkey, calling it a “grave” development. The Baku-Tbilisi-Ceyhan pipeline and the Baku-Tbilisi-Kars railroad run through Azeri territory about 20 kilometers (12 miles) from the Armenian border. But before giving credit to this argument, one needs to look at who triggered the clashes and whether Armenia has taken any Azeri territory. Baku says the Armenians have failed to move even an inch across the border, while the two sides trade accusations on who started the clashes.

As things stand at present, Turkey’s hawkish messages could be attributed to the self-confidence it has gained in its recent military ventures in Syria and Libya. Both interventions have served Erdogan’s interests in domestic politics, but neither of them could compare to the nationalist fervor that Turkish posturing in the Caucasus could stoke, given Turkey’s ethnic kinship with Azerbaijan and historical enmity with Armenia.

Aydin Sezer, a Turkish expert on Russia, told Al-Monitor that Erdogan failed to rouse the strong nationalist wave he expected by reconverting the Hagia Sophia to a mosque and might now try his hand in the Caucasus. This, of course, does not mean that Turkey will go to war.

Two other explanations could be offered to make sense of Ankara’s outbursts. First, Erdogan might believe that he would benefit from a posture challenging Russian patronage in the Caucasus, having seen the West’s appreciation of Turkey’s “outpacing” of Russia in Libya. Such a calculation, however, would face some serious conundrums. In 2008, Turkey learned that ill-calculated adventures in the Caucasus are not a good idea after Georgia, emboldened by NATO’s goading attitude, attacked South Ossetia, only to suffer a debacle against Russia’s intervention.

According to Sezer, Turkish support for Azerbaijan is unlikely to go beyond diplomatic and political efforts, as a Turkish military intervention against Armenia would antagonize the United States before Russia.

Second, Ankara might be hoping to pressure Russia in Libya and Syria. Erdogan has fallen behind his declared objectives in both conflicts. In Libya, in particular, he needs to change the rules of the game after the Russians made it clear they see Sirte and al-Jufra as a red line. And the talks with Russia are not going well. “I don’t think that Turkey’s moves are based on a well-calculated strategic planning, but it might be seeking to apply some pressure in the Caucasus that would push the Russians to be more flexible in Syria and Libya,” Sezer said.

Yet, the conflict dynamics in the South Caucasus — no matter what set them into motion — might pave the way for Russia to reassert its control in the region. Of note, the 2008 conflict resulted in Russia recognizing the independence of South Ossetia and Abkhazia.

The South Caucasus belt, comprising Azerbaijan, Armenia and Georgia, is often seen as a region akin to Ukraine where Russian influence could be undone to give NATO a foothold. In this context, Turkey’s access to the Caucasus is seen as a valuable asset.

In such a scenario, however, Armenia is a lost link. There is no Turkish channel with Armenia as the two countries lack diplomatic relations. Moreover, Armenia is heavily dependent on Russia, both in military and economic terms. If things spiral out of control, the United States might choose to protect Armenia, but the current circumstances discourage Washington from taking sides or risking a showdown with Russia.

In 2009, Turkey and Armenia had reached a landmark agreement to establish diplomatic ties and reopen their shared border, but the deal has since collapsed amid mutual recriminations. Had the deal survived, the scenario of a NATO prospect for the Caucasian trio would have made sense.

Some observers see the 2018 Velvet Revolution in Yerevan as a sign that Armenia could break away from the Russian orbit down the road, but they seem to underestimate Russia’s intervention capacity. To keep the strategic equilibrium in the South Caucasus in its favor, Russia has kept Armenia both under control and in safety. Likewise, it has been careful to not alienate Azerbaijan and let it drift to the opposite camp, though it has acquiesced to Baku’s close ties with Ankara, playing a sophisticated balancing act.

Amid NATO’s efforts to edge into the South Caucasus, Russia has sought to retain old Soviet bases in Armenia and Azerbaijan. It has managed to extend a lease deal on Armenia’s Gyumri base until 2044, while leaving the Gabala base in Azerbaijan in 2012. In terms of military sales, it has supplied arms to both countries.

Armenia today relies on Russian-made BUK-M2 surface-to-air missiles, Iskander ballistic missiles and MiG-29 fighter jets. It signed a deal for 18 Sukhoi Su-30SM jets last year, and sees the Russian S-300 air defense systems, deployed at Gyumri, as an additional shield. Moreover, Russia has a formal commitment to protect Armenia as part of the Collective Security Treaty Organization, based on the principle that an attack on one member is considered an attack on all.

Nevertheless, Russia has not ignored Azerbaijan. It has provided assurances that the S-300s cannot be used against Azerbaijan, in addition to selling the same systems to Baku. While remaining a good client of Russian arms, Azerbaijan has diversified its arsenal with purchases from Israel, including LORA ballistic missiles, Hermes-900 drones and an EL/M-2106-ATAR radar system, as well as equipment from Turkey, including IHTAR anti-drone systems and SOM-B1 guided missiles.

In short, the existing conditions allow Russia to maintain a “big brother” position in the Armenian-Azeri confrontation.

Despite its close ties with Ankara, Baku never managed to “divorce” Moscow after the collapse of the Soviet Union. The Azeri elites keep their deep-rooted ties with Russia and, as Sezer notes, “The Azeri lobby in Moscow remains very strong. As a matter of fact, the Armenian lobby has always envied the Azeri one.”

Azeri-Turkish ties, meanwhile, have failed to live up to the adage of “two states, one nation,” which the two countries use to describe their bonds. In a speech to the Azeri parliament in 2009, Erdogan promised that Turkey would never normalize ties with Armenia as long as it occupies Azeri territory. The pledge softened the chill in bilateral ties over Ankara’s deal with Yerevan the previous year, but Azeri mistrust of Turkey was never fully remedied. And while placing importance on Turkey’s support, Baku has never allowed itself to ignore Moscow, as evidenced by their close ties in the defense and energy fields.