By linking Turkey’s normalization with Armenia to a peace settlement between Armenia and Azerbaijan, Erdogan could encourage intransigence on Baku’s part. 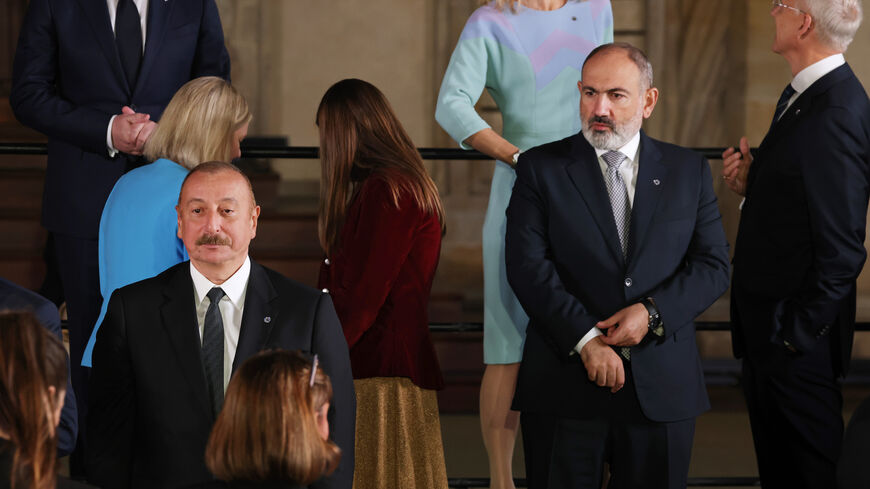 Leaders of nations of the European Political Community (EPC), including Azerbaijan President Ilham Aliyev (L) and Armenian Prime Minister Nikol Pashinyan (R), arrive for a group photo during the inaugural meeting of the EPC at Prague Castle on Oct. 6, 2022, in Prague, Czech Republic. - Sean Gallup/Getty Images

The recent meeting between the leaders of Turkey and Armenia — the first in 13 years — has rekindled the prospect of normalization between the two estranged neighbors, with anticipation buoyed further by Armenia and Azerbaijan agreeing to a civilian European Union mission to help demarcate their disputed borders.

Armenia’s territorial conflict with Azerbaijan and its disputes with Turkey have grown into an entangled, ossified problem in the past three decades. Though a solution remains an uphill task, the cost of perpetuating the status quo has grown since the 2020 war between Armenia and Azerbaijan, turning up the pressure for lasting peace.

Turkish President Recep Tayyip Erdogan, his Azerbaijani counterpart, Ilham Aliyev, and Armenian Prime Minister Nikol Pashinyan met on the sidelines of a European gathering in Prague Oct. 6, after which the Turkish and Armenian leaders held bilateral talks. The last high-level meetings between the two countries took place in 2008 and 2009, producing a deal to establish diplomatic ties and reopen their border that eventually failed to go through.

Erdogan said after the meeting that Turkey was ready to reopen its border with Armenia and help revive transport links as soon as Yerevan and Baku reach a peace deal. This amounts to Turkey readjusting its terms and conditioning normalization with Armenia on the conclusion of Azerbaijani-Armenian peace. Previously, Ankara sought Armenia’s withdrawal from occupied Azerbaijani territories — a condition that materialized as a result of the 2020 war over the Nagorno-Karabakh enclave in which Turkish military assistance helped Azerbaijan prevail.

Of particular interest to Erdogan is a prospective transport link between Azerbaijan and its exclave of Nakhchivan, which is separated from the mainland by a strip of Armenian land and shares a tiny border with Turkey. For Ankara, the route — often referred to as the Zangezur corridor — would secure a shortcut to Central Asia.

Erdogan said Pashinyan made certain requests that would be discussed by the two countries’ foreign ministers and special envoys. The special envoys have met four times since January. Their fifth meeting, which was scheduled for September, fell through amid a new bout of Azerbaijani-Armenian clashes.

Al-Monitor has learned that Pashinyan asked for Erdogan’s help to secure the release of prisoners of war and in delineating the Armenian-Azerbaijani border. Pashinyan, the sources said, wants the border to be drawn on the basis of the Soviet-era map rather than the pre-Soviet one, which would cause Armenia to lose territory. Erdogan, for his part, raised the issue of the transport corridor and reiterated that Yerevan should end its international campaign to have the Ottoman-era massacres of Armenians recognized as genocide.

In Prague, Pashinyan and Aliyev also held four-way talks with French President Emmanuel Macron and European Council President Charles Michel, which produced an agreement on a civilian EU mission on Armenian territory alongside the border. According to a statement issued after the meeting, the mission, starting in October for two months at most, aims “to build confidence and, through its reports, to contribute to the border commissions.” The next border delimitation talks will take place in Brussels by the end of October, it said.

The mission proposal had been advanced by EU foreign affairs chief Josep Borrell, who accused Azerbaijan of “unacceptable” actions earlier this month, saying that it was shelling Armenian territory, destroying infrastructure and “occupying positions in Armenia.”

Aliyev appears to have agreed to the mission under EU and US pressure, having previously rejected EU monitoring at the border. The peace process has accelerated and the working groups should now start drafting the peace agreement, he said after the meeting.

The initiatives in Prague generated a skeptical response from Russia, which sees the southern Caucasus as its backyard. Western approaches to the Azerbaijan-Armenia conflict “do not seem to be quite balanced,” Russian Foreign Ministry spokeswoman Maria Zakharova said, adding that some Western actors “cannot even be called peace mediators.” Moscow delivered its own settlement proposals to Baku and Yerevan in September, she noted.

From Ankara’s perspective, the ball is now in Yerevan’s court and Pashinyan is supposed to hold out against domestic opposition to press ahead. He is well aware that this could prove a political suicide. Nevertheless, domestic objections could ease amid growing misgivings among Armenians over Moscow’s mediation role after the Russia-led Collective Security Treaty Organization failed to step in over the fighting in September.

Rapprochement with Turkey is a logical path for Pashinyan as he tries to get rid of Russian influence. For his part, Erdogan could hardly find another Armenian leader as inclined to make peace as Pashinyan.

Aliyev’s posture, however, has been rather supercilious, emboldened by Turkish support tipping the balance of power in his favor. This narrows Pashinyan’s maneuvering room and could require Ankara to press Baku for flexibility if it is to make its win-win rhetoric convincing. After the Prague talks, Pashinyan said Azerbaijan “did not respond positively” to his proposal on “unblocking all regional [transport] communications with full respect of our sovereignty and legislation.” The Armenian leader has given the nod to the Zangezur corridor — though he refuses to term it as such — but is opposed to ceding any sovereignty rights to Azerbaijan such as controlling vehicles or collecting fees along the route.

Aliyev’s hitherto approach has promised nothing but a full debacle to Armenia. Hence, Erdogan’s assertion that Turkey has no preconditions of its own and Pashinyan should reconcile with Aliyev makes no real contribution to advancing the process. Linking Turkey’s normalization with Armenia to a peace deal between Armenia and Azerbaijan leaves Turkey without an independent road map or keeps it from using its weight to entangle the knot in the southern Caucasus. As such, Erdogan’s policy could bolster Aliyev’s inclination to use force and stir up the hawks in Armenia.

On Nagorno-Karabakh, for instance, Aliyev has refused to discuss the status of the region’s Armenian population, including any form of autonomy. “The Armenians will have the same rights as the citizens of Azerbaijan. … And if for some reason this does not suit someone, they can choose another place of residence for themselves,” he said last week.

Pashinyan appears inclined to be flexible regarding Nagorno-Karabakh’s future and might eventually agree even to a minority status for its Armenians. Such flexibility would be a big chance for peace. Erdogan could help by shifting to a position that would facilitate things for Pashinyan and prompt Aliyev to be less intransigent.