Can Ankara’s “coercive diplomacy” in the south Caucasus yield tangible diplomatic benefits in the long run? 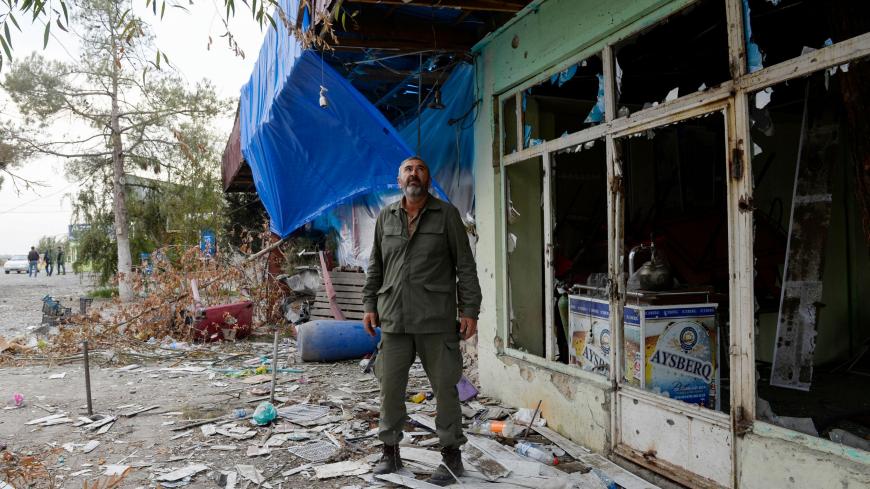 Local resident Rovshan stands by a cafe damaged by shelling in the settlement of Dord Yol in Azerbaijan's Tartar district on Oct. 26, 2020, during the ongoing military conflict between Armenia and Azerbaijan over the breakaway region of Nagorno-Karabakh. - TOFIK BABAYEV/AFP via Getty Images)

Turkey once again assumed the role of “game changer” — this time in the Nagorno-Karabakh conflict. As with previous cases in Syria, Libya and the eastern Mediterranean, the big question is whether Ankara can gain diplomatic dividends for its “hard power.”

Since hostilities erupted between Armenia and Azerbaijan over Nagorno-Karabakh on Sept. 27, Turkey’s past military sales to Azerbaijan — especially attack drones — gained attention. Field reports indicate that, unlike the inconclusive skirmishes of the past, the Azerbaijanis have gained considerable territory from the Armenians.

The Nagorno-Karabakh dispute goes back decades. An Armenian-majority autonomous enclave within Azerbaijan’s borders during Soviet times, Nagorno-Karabakh and surrounding Azerbaijani territories came under Armenian occupation in the early 1990s, displacing some 800,000 Azerbaijani civilians. For nearly 30 years, the so-called Minsk Group — co-chaired by France, Russia and the United States — has failed to offer a diplomatic solution to the conflict. Now, with Turkey’s backing, Azerbaijan seems to be cutting the Gordian knot.

Of course, Turkey’s gains in Nagorno-Karabakh and elsewhere worry other parties. Earlier this month, French President Emmanuel Macron accused Turkey of transferring jihadis from Syria to Azerbaijan, a claim Ankara denied. Macron’s statements followed the tried and tired analysis that everything that Turkish President Recep Tayyip Erdogan does abroad must be for “religious” reasons. Others claim that Erdogan is overreaching geopolitically and militarily — just as he had done in Syria, Libya and the eastern Mediterranean.

And yet the Turkish juggernaut keeps marching on. Istanbul-based political analyst Yoruk Isik thinks that reports of Turkey’s “overextension” are exaggerated. Isik told Al-Monitor, “I think many people have problems understanding the power of the Turkish military and how it has many people who do their jobs well. Of course, it is also a gigantic military. We could count 10-20 negative sides to having a gigantic military. But it is a military that can conduct a variety of operations in many different locations.”

The bigger problem for Turkey seems not so much overreach as knowing where to stop — having a diplomatic “endgame.” As Al-Monitor columnist Fehim Tastekin reminds us, Turks often complain about winning in the field, but not sitting at the negotiating table. In the spring, the Turkish military saved the day against Syrian regime forces and their Russian backers in Idlib. The Turkish intervention in Libya propped up the UN-backed government in Tripoli. Operations against the Kurdistan Workers Party in Iraq occur at the time and place of Ankara’s choosing — even if they come at the expense of civilians and Iraqi officials sometimes. And yet Turkey fails to convert these military gains into diplomatic clout.

What would “diplomatic gains” for Ankara look like in Nagorno-Karabakh and elsewhere? One idea that would put a gentle face on Turkey’s muscle is to join the ranks of France, Russia and the United States as a co-chair of the Minsk Group.

But Russia analyst Kerim Has told Al-Monitor that Turkey’s partnership with Azerbaijan and perceived enmity toward Armenia complicates that. Has said, “It is no secret that the United States, Russia and France all have close relations with Armenia. But none of them have a hostile attitude toward Azerbaijan.” He added, “I am not sure that Russia would want to open up a space for Erdogan in the south Caucasus or in the Nagorno-Karabakh conflict when it considers Erdogan highly unpredictable and as a source of instability based on its experiences dealing with him in Syria and Libya.”

Of course, Moscow has plenty of reasons to worry about Turkish influence in its neighborhood — even more than Ankara’s Western partners who are concerned about “losing” Turkey to Russia. As Al-Monitor’s Metin Gurcan recently pointed out, Turkey is fast establishing a strategic partnership with Ukraine, much to Russia’s consternation. According to the BBC’s Moscow correspondent Steve Rosenberg, the Russian press considers Ankara’s recent moves “an unprecedented breakthrough into [Moscow’s] political space.”

For Hakan Gunes, a professor of international relations at Istanbul University, there are various ways to interpret Russia’s diplomatic game in the south Caucasus and what Turkey can do about them. “The first scenario is Russia enables Azerbaijan to reclaim its seven occupied rayons [departments] around Karabakh and wear down Armenia’s pro-Western prime minister, Nikol Pashinyan. That way, Russia will keep Azerbaijan on its side. The second scenario is that Russia may be looking for a new equation in the south Caucasus where it flashes a ‘yellow light’ to Azerbaijan while also keeping Turkey at arm’s length by creating additional trouble. We can see that with the Russian Embassy’s recent statements supporting Greece’s position against Turkey in the eastern Mediterranean and the Russian navy holding exercises with Egypt in the Black Sea.”

Gunes also points out that “surprising developments” could ensue to end the Nagorno-Karabakh conflict. “It would be surprising but not impossible to conceive of a scenario where Russia agrees to jointly deploy peacekeeping forces with Turkey between Armenia and Azerbaijan. That would serve Russian aims by further distancing Turkey from NATO. It is unlikely, but not impossible. We saw such a surprising development in Syria with the Astana process even though Turkey had shot down a Russian fighter jet in November 2015.”

Working with a diverse set of partners and mediating conflicts is a good idea — something that the Erdogan administration has done in many conflict zones anyway. But Isik said turning Turkey’s growing power into the role of peacemaker — in Nagorno-Karabakh and beyond — will require investing in its diplomatic corps the way it has invested in its military. He said, “Why can we not serve as a mediator? Turkey is not effectively using its diplomats — who are just as qualified as their military counterparts and who inherit deeply rooted institutional traditions like the Turkish military.”

To be sure, the Turkish diplomatic corps’ own memories and the acrimonious language flying between the leaders of Turkey, Armenia and Azerbaijan may make that idea sound far-fetched. But Gunes reminds us not to dismiss Turkey’s “soft power.” He said, before the recent conflict erupted in Nagorno-Karabakh, “More Armenians preferred to open the borders with Turkey than having visa-free travel to Russia.” Ten years ago, Turkey and Armenia were seeking ways to normalize relations — a sentiment Pashinyan had reiterated in late 2018.

The simple formula for Turkey’s diplomatic success may be to continue investing in its military capabilities but speaking more softly, unclenching its fist and extending a hand to its opponents. 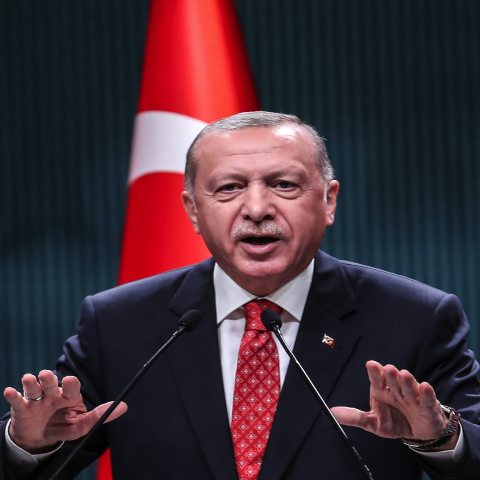 Why Mediterranean tensions may not benefit Erdogan at home