Turkey backs Azerbaijan against Armenia as war looms over Caucasus

Armenia and Azerbaijan are once again fighting over the enclave of Nagorno-Karabakh in a conflict that could draw in Russia and Turkey. 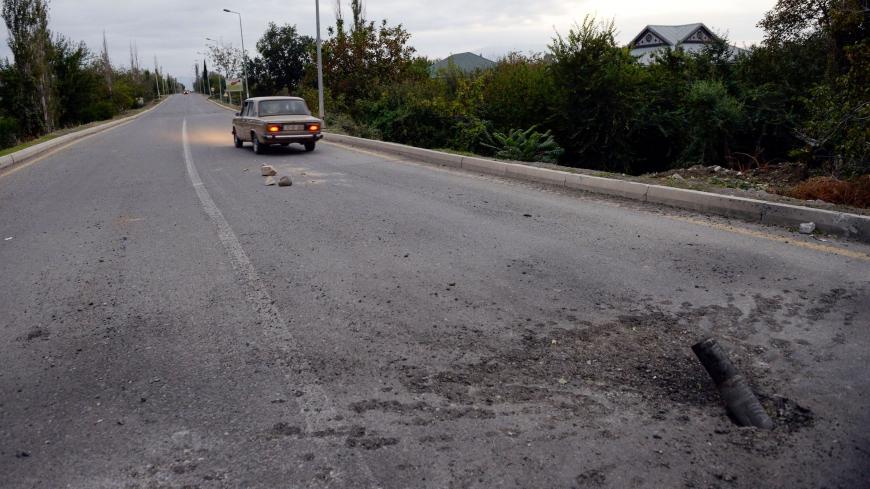 A picture taken on Sept. 28, 2020, shows an unexploded artillery shell on a road on the outskirts of the Azerbaijani city of Tartar during clashes between Armenian separatists and Azerbaijan over the breakaway Nagorno-Karabakh region. - TOFIK BABAYEV/AFP via Getty Images

As renewed fighting between Armenia and Azerbaijan over the disputed enclave of Nagorno-Karabakh enters its second day, the question of why now is looming ever larger, amid fears of a full blown conflict in the Caucasus that could draw in Russia and Turkey.

The Armenian Foreign Ministry said in a statement today that Turkey already had a “direct presence on the ground” and that Turkish military experts were “fighting side by side” with Azerbaijani forces who were using Turkish weapons and aircraft.

Armenian officials have also accused Turkey of transporting thousands of Syrian mercenaries to Azerbaijan, as it has done to Libya. An aide to Azerbaijan’s president, Ilham Aliyev, rebutted the assertions as nonsense today.

But two Syrian rebel fighters quoted by Reuters said they were “deploying to Azerbaijan in coordination with Ankara” and had been told by their brigade commanders that they would earn $1,500 per month. Similar descriptions of the alleged recruitment effort circulated on Twitter and were reported by The Guardian as well.

Turkey has riposted with its own claims that Armenia is deploying Kurdish militants from the outlawed Kurdistan Workers Party and Syrian mercenaries of its own. Azerbaijan has, in turn, accused Russia of sending large numbers of weapons to Armenia, where it maintains a base near the Turkish border in Gyumri. While none of these allegations can be verified, the emerging consensus is that Azerbaijan most likely instigated the attacks after receiving assurances of military support from Turkey.

Turkish President Recep Tayyip Erdogan renewed his support for Azerbaijan today, saying that Armenia must immediately end its occupation of Azerbaijani territories. He called Armenia, a country of 2.9 million versus Turkey’s estimated 84 million, “the biggest threat to peace in the region.”

The current conflagration, he said, offered an opportunity for Azerbaijan to seize back Nagorno-Karabakh. “Recent developments have provided an opportunity for all influential countries in the region to introduce realistic and fair solutions,” he said. “We hope that this opportunity will be utilized.” More ominously, Erdogan noted that since the Minsk group of mediators led by Russia, France and the United States had failed to resolve the conflict for almost 30 years, Azerbaijan “had to take matters into its own hands whether it likes it or not.”

Armenia has begun a general military mobilization and both countries have declared martial law. Azerbaijan has sealed its airspace to all flights except from Turkey. Dozens of people including civilians have been reported killed and hundreds wounded on both sides. Armenian Prime Minister Nikol Pashinian said, “We are on the brink of a full scale war in the South Caucasus.” He blamed Azerbaijan and Turkey.

Russia, the United States and NATO have all called for an immediate cessation of hostilities, as has Iran.

Turkey and Azerbaijan are bound by strong ethnic and historical ties, which saw Turkey send weapons and military advisers to Azerbaijan in the early 1990s when the war over Nagorno-Karabakh, an Armenian-majority enclave inside Azerbaijan, was in full swing. Reflecting the public mood, the main political parties in the parliament, with the exception of the pro-Kurdish bloc, signed a joint declaration in defense of Azerbaijan today.

Turkey is the main export route for Azeri oil and natural gas. Azerbaijan’s state oil company, SOCAR, is the biggest foreign investor in Turkey. Yet despite all the talk about being “one nation, two states,” the reality is more complex. Azerbaijan, though ethnically Turkic, is mostly Shiite. “Turkey uses ethnicity and language while Iran uses religion to promote their agendas in Azerbaijan and then you have the Azerbaijani intelligentsia, who are all Russian speakers,” said Cavid Aga, an Ankara-based analyst who monitors the conflict. “The truth is that most Turks know very little about Azerbaijan,” he told Al-Monitor.

Culturally speaking, Anatolian Turks arguably have more in common with Christian Armenians who fled to Armenia from Turkey than they do with the Azeris in Azerbaijan. But such nuances get lost in the warmongering rhetoric spewing from Baku, Ankara and Yerevan alike.

The intensity and scale of the current round of fighting does suggest advance planning by Azerbaijan to upend the status quo, cemented since 1994, when it lost Nagorno-Karabakh and surrounding territories, and that favors Armenia.

Laurence Broers, Caucasus program director at the London-based think tank Chatham House, noted via Twitter that the clashes could be “an intentional but limited aims operation [on the part of Azerbaijan] aimed at recovering territories [and] consolidating [a] more advantageous new ceasefire, packaged as a military win.”

Firdevs Robinson, a London-based specialist on Turkey, the Caucasus and Central Asia, concurred.

“In Azerbaijan, the loss of significant part of the country’s territory has been a festering wound for decades but the pressure from the public has been growing in recent years,” she told Al-Monitor. “With the Minsk group largely ineffective in recent years, and the United States distracted with its presidential race, and the Europeans battling the pandemic, the timing of this latest escalation makes perfect opportunistic sense,” she added. It remains to be seen just how far Azerbaijan will go and how far Turkey will back it.

Pressure on Aliyev intensified when clashes erupted along Azerbaijan’s international border with Armenia in July, killing at least 16 people. Thousands of people took to the streets of Baku demanding the government declare war and wrest back Nagorno-Karabakh along with other lost territory.

“The prevailing sentiment in Azerbaijan now is that 'Turkey is behind us and told the [Azerbaijani] government: Do as you must,’ and that is the reason the government decided to act,” Aga, the Ankara-based analyst, contended. “Nagorno-Karabakh is an existential issue for Azerbaijanis across the political spectrum. They believe Turkey can help win it back and Erdogan is extremely popular in Azerbaijan.”

For Armenians and their brethren in the diaspora, Nagorno-Karabakh is every bit as existential if not more, as it's closely bound up with the trauma of the genocidal slaughter of more than a million of the Ottoman Empire’s Armenian subjects in 1915. Many wound up in Syria and now around 25,000 have sought refuge in Armenia since the start of the civil conflict there in 2011. Should the allegations of Turkish backed Sunni Syrian mercenaries being carried to Azerbaijan to fight the Armenians prove true, this would be a further cruel twist.

Against this background most Armenians see themselves as not just fighting Azerbaijan but Turkey as well. “President Erdogan’s discourse, such as his tweets that Turkey and Azerbaijan are ‘one nation, two states’ and that ‘the Turkish nation with all its capabilities, today as always, stands with its Azerbaijani brothers’ only serve to reinforce that dominant perception,’ said Khatchig Mouradian, a lecturer in Middle Eastern, South Asian and African Studies at Columbia University.

Turkey has no diplomatic ties with Armenia and its borders with its eastern neighbor remain sealed in solidarity with Azerbaijan. A brief period of rapprochement saw emergence of Armenian Genocide discussion, which was long criminalized, and a flurry of bicultural activity promoted by Turkish philanthropist Osman Kavala.

But hopes of a lasting thaw faded when Erdogan scrapped Swiss-brokered protocols to normalize relations with Armenia soon after they were signed in 2009.

He reportedly succumbed to pressure from Azerbaijan. In doing so, he forfeited Turkey’s chance to broker peace between Armenia and Azerbaijan by removing landlocked Armenia’s incentive to make concessions in exchange for open borders with Turkey. Kavala has been in jail since November 2017 on trumped-up terrorism charges. Hate crimes against Turkey’s 60,000-strong Armenian minority are on the rise.

Like many experts, however, Mouradian believes that Erdogan’s hawkish rhetoric on Armenia is tied to Turkey’s aggressive posturing in Libya, Syria and the eastern Mediterranean, where it’s been forced to back down in the face of Russian countermoves and threats of sanctions from the European Union. “Facing major economic challenges domestically, and forced to recoil from adventures in the Mediterranean, Erdogan is pinning hopes on some Azeri success for which he can take credit,” he told Al-Monitor.

Erdogan’s trashing of the Minsk process may well point to an even riskier gamble. A Western diplomat speaking not for attribution to Al-Monitor said that by fomenting instability in Russia’s hinterland, Turkey aims to create “greater symmetry in its relations with Moscow” to “create an Astana-like process for Karabakh” that will bolster its hand in its dealings with the Russians elsewhere. The diplomat was referring to the mechanism through which Turkey, Iran and Russia pursue their often clashing interests in Syria through mutual if begrudging accommodation. The prospect of freezing out France and the United States from mediation efforts should prove attractive to Moscow, or that anyway may be Ankara's calculation.

Turkey may also be hoping to benefit economically by selling more military hardware to Azerbaijan and win better terms for its gas and oil imports. Nothing is that straightforward, however, warned Robinson, and Turkey could walk away empty handed. "Yet another short-sighted, half-baked military adventure, especially when it involves coming face-to-face with Russia, in its historical backyard, will be nothing like playing power games in Syria or Libya,” she said. “It might be useful to remember that President Aliyev is a pragmatic leader. His country has close ties with Russia and Azerbaijan buys arms from Israel. When forced to choose between the real regional power — Russia and the one with ambitions to become one — we can guess which direction he will take.”