Iran is stirring up a diplomatic quarrel over a poem recited by Recep Tayyip Erdogan during his recent visit to Azerbaijan's capital, Baku. 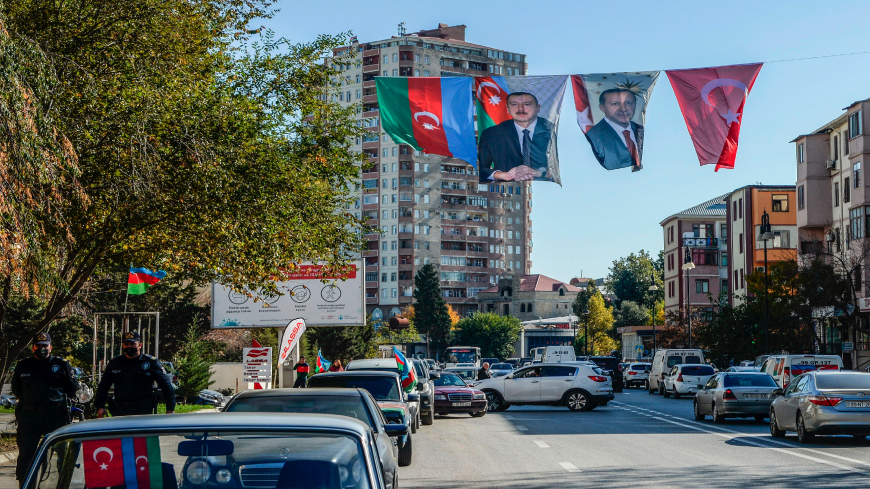 Police officers walk along a street in front of flags of Azerbaijan and Turkey and portraits of Ilham Aliyev and Recep Tayyip Erdogan hanging on a cable above it in Baku on Nov. 9, 2020. - TOFIK BABAYEV/AFP via Getty Images

Tensions between Turkey and its historic regional frenemy Iran are rising over Azerbaijan and the arrests of several Turkish citizens accused of links to an Iranian drug baron and the kidnapping of an Iranian dissident in Istanbul.

Sparks began to fly when Turkish President Recep Tayyip Erdogan recited a poem composed by Azeri poet Bahtiyar Vahabzade during an official visit to Baku on Dec. 10 to celebrate Azerbaijan’s victory over Armenia in Nagorno-Karabakh.

A verse that alluded to Iran’s large ethnic Azeri minority was the trigger. “They separated the Aras River and filled it with sand. I will not be separated from you. They have separated us by force,” Erdogan, intoned. The river that rises in Turkey serves as a natural boundary between Azerbaijan and Iran’s Azerbaijan region. The area is home to Turkic-speaking Azeris, who constitute the Islamic Republic’s largest non-Persian minority and are seen as potential separatists prone to exploitation by external enemies.

A day after Erdogan’s recital, Iran summoned Turkey’s Ambassador to Tehran Derya Ors to convey its displeasure. His words were “unacceptable and meddlesome,” the Foreign Ministry said, demanding an explanation. Iran’s Foreign Minister Mohammad Javad Zarif went further, asserting via Twitter that the poem “refers to the forcible separation of areas north [of the] Aras from [the] Iranian motherland. Didn’t he realize he was undermining the sovereignty of the Republic of Azerbaijan?"

Omer Celik, top spokesman for Erdogan’s ruling Justice and Development Party, in turn lashed out at Iran on Dec. 12. “We condemn the ugly language used by some Iranian politicians against our president,” he said. “They have lost their way to the point of confusing our president, who has always regarded Iran as a friend and brotherly neighbor, with Iran’s enemies.”

There followed a telephone call between Zarif and his Turkish counterpart, Mevlut Cavusoglu, after which the Iranian Foreign Ministry declared that the “misunderstanding” had been overcome. Then on Monday, Iran’s President Hassan Rouhani announced, “Based on my experience with Mr. Erdogan, it’s impossible that Turkey would target our territorial integrity. In my view, following the conversation and statement between the foreign ministers of the two countries, we can consider the matter closed.”

But is it? Is Turkey as interested in putting the lid on the burgeoning spat as Iran appears to be?

On Dec. 14, Turkey’s state-run news channel TRT World reported that Turkey’s national intelligence outfit, the MIT, had arrested 11 people linked to a Turkish drug cartel. The detainees are being accused of abducting Iranian dissident Habib Chaab, who was lured to Istanbul from exile in Sweden with promises of financial help. He was then spirited across the border to Iran, where he was attacked and forced to confess to bogus charges of involvement in a military parade two years ago. Notorious Iranian drug baron Naji Sharifi Zindashti, who was acting in concert with Iranian officials, allegedly engineered the sting.

The very public airing of the story first leaked by a Turkish official to The Washington Post suggests Turkey is keen to telegraph that it's taking robust action against Iran as it seeks to build bridges to the incoming Joe Biden administration. More unusually, Turkey’s MIT, whose boss Hakan Fidan has been accused by Israel of ratting out its local assets in Iran to the clerical regime, is presented as having taken the lead. This, in turn, fits with Turkey’s recent efforts to reach out to Israel — which have been greeted with a big shrug and a yawn.

Timur Soykan, author of “Battle of the Barons,” a recent book about Turkey’s drug mafia, agrees that Turkish authorities seem keen to publicize the arrests. “A foreign country carrying out operations on one’s own soil is a very big problem for any country,” he told Al-Monitor. “What is of particular note is that Turkey had in the past remained silent” when Iranian agents carried out similar rogue operations on Turkish soil, Soykan said in emailed comments to Al-Monitor.

Turkey and Iran have a tradition of managing their rivalry pitting the region’s most powerful majority Sunni state against the Shiites’ clerical regime. Firdevs Robinson, a London-based analyst and former editor of the BBC’s Central Asia desk, said, “Despite their historic rivalry, Turkey and Iran, with their strong traditions of statehood and multiethnic societies, have always maintained a delicate balance in their bilateral relations. On Kurdish separatism, they chose to cooperate. In return, Turkey has refrained from any comment or action that could be perceived as supporting separatist tendencies among Iran’s large Azeri minority.”

So what has changed? Chalking up brownie points with Washington and Israel may be one explanation. But Robinson reckons that Erdogan’s poetic license, as it were, was no accident but rather a sop to his informal nationalist coalition partner, Devlet Bahceli, whose ultra-Nationalist Action Party has in the past sent Gray Wolf volunteers to fight in Azerbaijan’s 19-year-long conflict with Armenia. “When I heard Mr. Bahceli’s inflammatory comments, I came to the inevitable conclusion that his speech was not an accident,” Robinson observed. “What is driving it is the same nationalist pressure that is replacing [Erdogan’s] Islamist ideology and reshaping Turkey’s foreign policy in recent years.”

Robinson was referring to Bahceli’s angry reaction to Iran’s rebukes. He repeated the same radioactive verses on his Twitter feed Monday, followed by a lengthy diatribe about Turkic unity and Iranian insolence.

Turkey’s military backing for Azerbaijan, which proved decisive in helping it wrest back territories occupied by Armenian forces for decades, has strong support among Turks of all ideological stripes. Alin Ozinian, a Yerevan-based political analyst, detects “a resurgent wave of chauvinism” in Turkey that has been energized by the conflict between Azerbaijan and Armenia. “Social media is where this wave is manifested in its purest and most authentic form,” she told Al-Monitor, as people can “pour out their hatred without revealing their true identities.” Ozinian, an ethnic Armenian from Istanbul who has been at the receiving end of such abuse, believes Azerbaijan’s victory has been very “useful” domestically for Erdogan. “He was in the starring role of a Turkish victory that was secured in the teeth of Russian opposition,” or so it’s being cast, she noted.

Erdogan’s fan base extends to Azerbaijan as well, where Turkey’s patronizing attitude had ruffled national pride for years following the collapse of the Soviet Union.

Arzu Geybullayeva, an Azerbaijani journalist who is fiercely critical of her country’s autocratic leadership and, like Ozinian, a target of nationalist trolls, said, “Erdogan's popularity in Azerbaijan was already visible from day one of the fighting that started on Sept. 27. Praise for Erdogan's support to [Azerbaijani President Ilham] Aliyev in this war is an ongoing conversation. This gratitude was also visible across Azerbaijan where the national flag of Turkey hung next to the flag of Azerbaijan” during Erdogan’s state visit, she told Al-Monitor.

“Anyone who has been against this war is treated and described as a traitor and as someone who hates their country and its people. There has been so much hate circulating online against critics of the war and pacifists, and some of it truly reached disgusting levels. From deliberate targeting to calls for public punishment and arrests. I remember seeing one commentator saying that we should all be shot,” Geybullayeva said.

None of this has sat well with Iran, which is widely alleged to have supported Armenia in past years as a means of counterbalancing Azerbaijan. But Iran’s Azeris have been pushing back.

Hamidreza Azizi, a visiting fellow at the German Institute for International and Security Affairs, said, “Since the beginning of the war, Iranian political elite and the public were polarized on how Tehran should react to the development. On the one hand, there was a group of people arguing that because of religious and cultural considerations, Iran should take sides with Azerbaijan.”

Azizi continued, “The pressure posed by Iran’s ethnic Azeris in the form of public gatherings in support for Baku was also a strong factor pushing the Iranian government further in that direction. The second group argued that Baku retaking Karabakh would deal a serious blow to Iran in geopolitical terms, and it would also mean an increasing Turkish and Israeli presence in the South Caucasus, which is considered as Iran's 'cultural and historical strategic depth.' Turkey’s move in deploying Syrian mercenaries into Karabakh was another major concern for Iran.”

Azizi was referring to Israel’s arms sales to Azerbaijan, which increased markedly during the course of the latest round of hostilities. “Aware of all these perils, the Iranian government opted for publicly supporting Azerbaijan — apparently as ideological factors and Azeri pressures were more effective. At the same time, there was a strong belief in Iran that the recent war in Karabakh was in fact Erdogan’s initiative, not Aliyev’s.

As such, a small reference by Erdogan to Iran’s Azerbaijan — which to me, doesn’t seem to be a deliberate provocation — was enough for the Iranian government to first see itself facing an upcoming wave of public outrage from those who were against Iran’s support for Baku, and second to believe that the worst-case scenario regarding what they see as Erdogan’s expansionist ambitions is about to happen.”

Turkey’s recent stabs at improving ties with the United States and Israel suggest that its energies are shifting from overseas military adventures to restorative diplomacy, but not if Bahceli continues to have his way.