Who really won in south Caucasus?

While the conventional wisdom is that Russia allowed Turkey to soften Armenia for the kill, then swooped in and imposed its own terms, talk of Russia’s big win may be somewhat overstated. 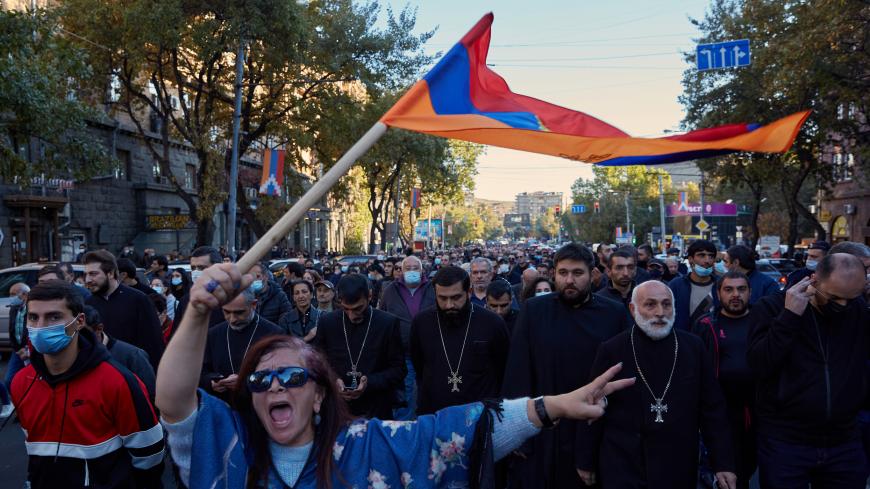 A woman waves an Armenian flag as protesters march to demand the removal of Armenian Prime Minister Nikol Pashinyan from office near the Armenian Parliament building on Nov. 11, 2020 in Yerevan, Armenia. - Alex McBride/Getty Images

Of all Turkey’s recent foreign forays, it was the fastest and most decisive.

Turkey’s intervention in September with military advisers, precision drones and Syrian mercenaries allowed Azerbaijan to wrest back all its territories occupied by Armenia for almost three decades in six bloody weeks. The country’s strongman President Ilham Aliyev has been given a big boost. Turkish hard power has shifted the balance in the south Caucasus, much as it's done in Syria and Libya. Yet Moscow, which sat on its hands through much of the conflict, is seen by many as the real winner. Is it?

Defeat has been cruel and humiliating for Armenia. Its leaders are being assailed by a furious public as traitors. Its lost at least 1,500 soldiers, with an unstated number missing, a sizable portion of its military kit and all the land it hoped to barter for a future deal that would have given Armenian-majority Nagorno-Karabakh the right to self-determination — read: union with Armenia. A nine-point cease-fire deal brokered by the Kremlin that took effect on Tuesday effectively salvaged Armenian control over around 70% of Nagorno-Karabakh proper. Around 2,000 Russian peace keepers will be deployed in and around the enclave, spelling a return of Russian forces to Azerbaijan as well. Russia’s stranglehold over Armenia is near complete, its leverage over Azerbaijan arguably greater, to the extent that it can re-ignite hostilities.

The conventional wisdom is that Russia allowed Turkey to soften Armenia for the kill, then swooped in and imposed its own terms. Russia has said that Turkey will not be part of the peacekeeping forces on the ground, though Turkey’s President Recep Tayyip Erdogan claimed otherwise today.

So what has Turkey gained? Richard Giragossian, director of the Regional Studies Center, an independent think tank based in Yerevan, contends that Turkey has regained its lost role as “the primary military patron” of Azerbaijan, one it had forfeited when Azerbaijan was crushed by Armenia when war over Nagorno-Karabakh first erupted in 1991. “Turkish arms sales and advisers have now replaced Russia” and will want to keep things that way. “I sense Azerbaijani trepidation over Russian peacekeeper deployment,” Giragossian told Al-Monitor.

For many Azerbaijanis, the war was not just to regain lost territory. “It was a war of liberation from Russia,” said Thomas de Waal, a senior fellow at Carnegie Europe and the author of several books on the Caucasus.

Turkey’s biggest strategic gain, he reckons, is the opening of a transport corridor, albeit monitored by Russia, via Nakhichevan, an Azerbaijani enclave on Turkey’s eastern border that would give it access running through Armenia to Azerbaijan proper and beyond, “connecting Istanbul all the way to Bishkek in Central Asia,” de Waal told Al-Monitor. As such, Turkey will be connected by rail to Russia once links are reestablished.

Indeed, talk of Russia’s big win may be somewhat overstated. “There are weak points in the deal. Russia may have possibly bitten off more than it can chew. It has fewer than 2,000 troops in the middle of a conflict zone,” de Waal contended. “It's a deal but it’s not a peace,” he added.

Thus, while its Minsk Group co-chairs France and the United States, tasked with negotiating a peace settlement since 1993, have seemed utterly powerless and irrelevant as the conflict raged on, Russia will want to keep them in the game, if only for them to endorse the cease-fire deal. “Finally, there is nothing about the status of Nagorno-Karabakh in this agreement,” de Waal wrote in an essay for Carnegie. “This has been the issue at the heart of the dispute for more than a century. Leaving it out is deliberate, but it means that a highly sensitive political issue will remain unresolved.”

Ultimately, worries about Russian encroachment may propel Turkey to reopen its land border with Armenia, upending balances yet again, this time in Yerevan’s favor. The frontier was sealed in solidarity with Azerbaijan when Armenian forces occupied the Kelbajar region in 1993. Under the terms of Monday’s accord, Kelbajar will be the first occupied area to be returned to Azerbaijan on Nov. 14.

Once the withdrawal of Armenian forces from all the occupied areas is complete, Ankara’s excuses for scrapping a Swiss-brokered set of agreements signed with Armenia in 2009 to establish diplomatic ties and to reopen the border will evaporate.

Zaur Shiriyev, Azerbaijan analyst for the International Crisis Group, believes that Azerbaijan, which pressured Turkey into abandoning the 2009 deal, would now favor normalization between Turkey and Armenia because it would help dilute Russian influence. It would also make it easier for Baku to build economic ties with its long hostile neighbor. “More importantly, this would spur reconciliation, ease hatred and allow the peoples of the region to learn to live together in peace,” Shiriyev told Al-Monitor.

"There needs to be a peace plan that would lead to a peace treaty and Turkey's total normalization of relations with Armenia should be part of it. In fact Turkey should declare now that it will unilaterally unseal its border with Armenia as soon as there is a peace treaty," concurred Ozgur Unluhisarcikli, Turkey director for the German Marshall Fund of the United States, in emailed comments to Al-Monitor.

But shell-shocked Armenia is hardly likely to welcome any such moves, especially as long as Erdogan, who many see as the instigator of the war, remains in power.

"Turkey has served as the engine of the Azeri war effort in the command center, in the air with Turkish-manufactured Bayraktar drones and F16s and on the ground with Syrian mercenaries, as well as in the diplomatic arena. As such, Armenians see Ankara as Baku’s handler, fixer, and terrorist whisperer,” said Khatchig Mouradian, a lecturer in Middle Eastern, South Asian and African studies at Columbia University. “Ankara’s unabashed support for the war on Nagorno-Karabakh may well have been the final nail in the coffin of Turkish-Armenian normalization in the near term. It is difficult to imagine Yerevan engaging in an effort to revive the normalization process at a time when Armenia is mourning hundreds of youth who have fallen prey to Turkish drones,” Mouradian told Al-Monitor.

“The mere suggestion of Turkish-Armenian reconciliation is enough to be branded a traitor, to be publicly lynched,” said Diana Yayloyan, an Armenian researcher and civic activist. The war has revived the traumas of the genocidal killings of more than a million Armenians by Ottoman forces in 1915. “In the Armenian psyche, Azerbaijanis and Turks are merged as one, as a Turkic people who want to annihilate the Armenian people. The injection of Syrian mercenaries was a new and unexpected low,” Yayloyan told Al-Monitor. “Years of civil society normalization work has been blown to bits. We are back to zero,” she said.

Aliyev’s gloating tone, openly mocking Armenia’s beleaguered Prime Minister Nikol Pashinyan will not have helped. “What happened, Pashinyan?” Aliyev asked in a televised address to the Azerbaijani people. “What happened to the status [of Nagorno-Karabakh]. The status went to hell,” he guffawed.

Over time, pragmatism may ultimately prevail and Armenians may begin to “reckon with their own hubris, which is a contributory cause” of their defeat, de Waal said. “Nationalists won’t like it, but co-existence is inevitable,” tweeted Onnic J. Krikorian, a Tbilisi-based journalist who lived in Armenia for years. “It will be a long and difficult road, but it is one that will be have to be traveled. Hopefully, many Armenians and Azerbaijanis will embark upon it now.”