Moves for reconciliation between the two longtime opponents have been met with surprise by observers, who see ulterior motives on Turkey's part. 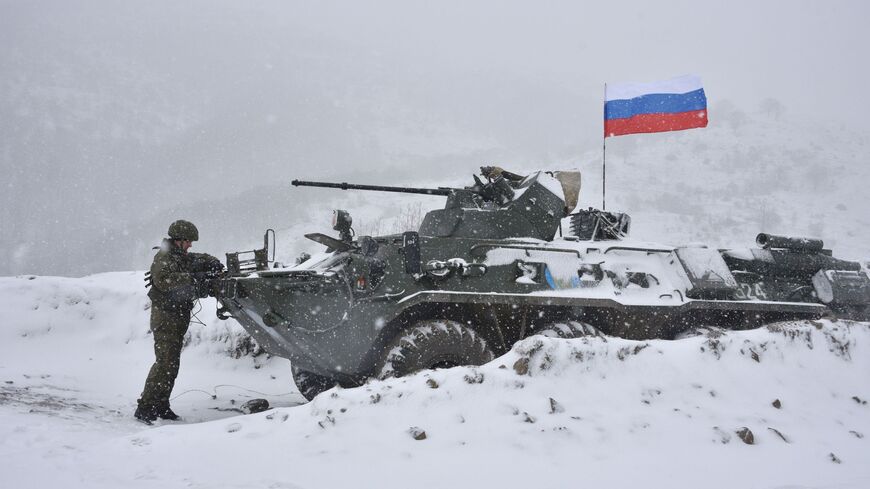 A Russian soldier of the peacekeeping force stand next to an armored personnel carrier at a checkpoint on the road to Lachin outside the town of Stepanakert on Nov. 29, 2020, after six weeks of fighting between Armenia and Azerbaijan over the disputed Nagorno-Karabakh region. - KAREN MINASYAN/AFP via Getty Images

Turkey and Armenia have formally confirmed that they are going to appoint special envoys to lay the ground for normalizing relations after decades of mutual hostility.

The announcement, first made by Turkish foreign minister Mevlut Cavusoglu, was endorsed by Armenia’s foreign ministry via Twitter, which asserted that the country was ready to initiate a process of normalization with Turkey “without preconditions.”

The Turkish foreign ministry has named Serdar Kilic, Ankara’s former ambassador to Washington, a career diplomat and an unabashed loyalist of Turkish President Recep Tayyip Erdogan as its envoy. Armenia has not yet named one.

The dovish noises coming out of Ankara and Yerevan have caught many by surprise. Why is Turkey still interested in fixing relations with its small, landlocked neighbor, and is it sincere? What’s in it for Armenia? And will Azerbaijan once again sabotage the process as it did in 2009?

Opinion remains divided, but most analysts believe that the road to peace between the two historical foes is riddled with obstacles.

Turkey’s borders with Armenia have remain sealed since 1993 in solidarity with Azerbaijan over the disputed enclave of Nagorno-Karabakh. Turkey’s military intervention swung the long simmering Nagorno-Karabakh conflict decisively in favor of Azerbaijan in October last year with the help of Syrian mercenaries. Israel also supported Azerbaijan with weapons and military advisors. A shaky truce brokered by Russian president Vladimir Putin and punctuated by bloody clashes has been holding since November 2020. The six-week long conflict left more than 6,500 dead.

Zaur Shiriyev, an Azerbaijan analyst for the International Crisis Group (ICG), believes that normalization between Turkey and Armenia “is the most natural consequence of the war, because the conditions that prevented normalization were removed by it.” Shiriyev was referring to Armenia’s occupation of seven Azerbaijani regions around Nagorno-Karabakh in the early years of the conflict. All are now back in Azerbaijani hands.

Turkey reckons that peace with Armenia would help repair its international image tarnished by human rights violations at home, aggressive actions in the Eastern Mediterranean, and its military invasion of large chunks of northeastern Syria.

A senior Armenian official, speaking to Al-Monitor on condition of anonymity, said Armenian Prime Minister Nikol Pashinyan “has always believed in normalizing relations with Armenia’s neighbors and that this should happen as soon as possible.” But the official stressed that if Turkey sought to impose preconditions, such as demanding that Armenia abandon its global campaign for recognition of the genocide of the Ottoman Armenians in 1915 and its claims over Nagorno-Karabakh, that the normalization process would be stillborn. “If that’s the way Turkey is going to behave, it had better not start,” the official said.

Cavusoglu, when announcing plans to appoint a special envoy, stressed that “we will be consulting with Azerbaijan every step of the way.” His comments conveyed that Ankara will not keep Baku in the dark as it did in 2009 when the Zurich protocols with Armenia were signed.

In so doing, Ankara is effectively linking progress in its own dealings with Yerevan to progress between Azerbaijan and Armenia to strike a comprehensive peace deal of their own, which is far from assured.

Shiriyev pointed out that Yerevan and Ankara will no longer be talking through mediators but directly through their respective envoys and that this could ease a breakthrough. And Kilic, the Turkish envoy, has direct access to Erdogan.

The Armenian official aired skepticism, saying, “I have yet to be convinced that this is more than a Turkish show to the Americans and the Europeans, in order to be able say there is a process, without actually being committed to its success.”

Russian president Vladimir Putin has been mediating between the former Soviet states and brought together Pashinyan and Azerbaijani president Ilham Aliyev in the Black Sea resort of Sochi last month to broker a fresh truce following a fierce bout of fighting along the ceasefire lines. The leaders agreed to start negotiations to determine their national borders. But Nagorno-Karabakh remains the big elephant in the room.

The European Union, accused of remaining passive for years, has started a diplomatic initiative of its own. The president of the European Council, Charles Michel, met with the Armenian and Azerbaijani leaders in Brussels this week. The European Council noted in a statement that the EU would be willing to provide technical assistance for marking the borders and financial support for re-establishing rail and road links between the two countries.

“The focus on economic connectivity reflects the reality that there are genuine opportunities now for a transformation of the region,” said Laurence Broers, Caucasus program director at Chatham House. And the EU “is not seeking to upstage, replace or dominate any other mediation processes. President Michel’s statement references Russian-brokered agreements and positions itself as building on these,” Broers told Al-Monitor. Critics say this plays straight into Russia’s hands as it amounts to a European seal of approval of its role, including the deployment of some 2,000 Russian peacekeepers in Nagorno-Karabakh.

The jury is still out on whether Ankara or Moscow came out on top in the war over Nagorno-Karabakh or whether it was the latest iteration of their so-called “competitive cooperation,” wherein the sides manage their differences in places like Syria and Libya and pursue their common interests.

With an unknown number of military officers and equipment deployed in the city of Ganja in western Azerbaijan, Turkey has re-established itself as the primary military patron of Azerbaijan, a status it forfeited when Armenia seized full control of Nagorno-Karabakh in the early 1990s. Millions of Azerbaijanis displaced by the conflict who are finally able to return home embrace the Turks as heroes.

But with its “peacekeepers,” Russia retains leverage on both sides and has no intention of letting Azerbaijan control a proposed corridor between Nakhichevan and Azerbaijan proper, which is to be secured by more Russian troops.

Aliyev and Pashinyan have agreed to establish road and rail links to connect the two nations. But Aliyev insists that the passage of all Azerbaijani goods through the corridor should be customs free. If not, he warned, Azerbaijan would start to charge duties on goods going from Armenia via Azerbaijani territory to the bit of Nagorno-Karabakh that remains under Armenian control.

Russian troops already guard Armenia’s 311-kilometer long border with Turkey, with thousands of others stationed at a base in Gyumri which faces the Turkish border town of Kars. The notion that Turkish-Armenian rapprochement would dilute Russia’s influence over Armenia is “utterly flawed,” noted the ICG’s Shiriyev.

“Turkey’s victory was neither as complete or as convincing. This is seen by Moscow’s move to renege on promises for a more direct role for Turkish military peacekeepers,” observed Richard Giragosian, director of the Regional Studies Center, an independent think tank in Yerevan.

“Russia has allowed [Turkey] a minimal and marginal position in the peacekeeping planning and supervision within Azerbaijan itself. This effectively gives Russian peacekeepers the dominant role in the region,” Giragosian told Al-Monitor.

Moreover, “There is little genuine confidence that Azerbaijan’s currently permissive position will last. Given the record over the past many months, the outlook for security and stability remains uncertain and unpredictable at best,” Giragosian added.