Are Turkey, Azerbaijan ready to talk peace with Armenia?

Although TRT momentarily reported that Azerbaijan had claimed it had emerged victorious in the Nagorno-Karabakh conflict, there seems to be a lot to still sort out before there can be a lasting cease-fire. 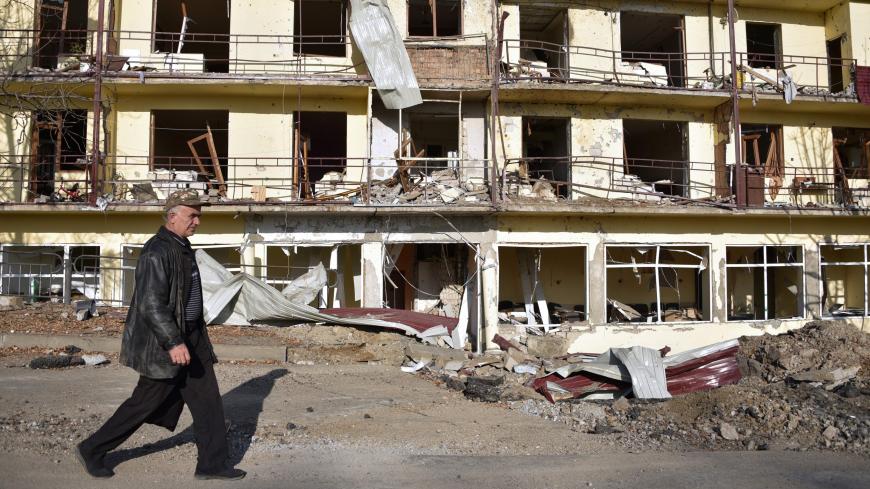 A man walks past a damaged residential building in the historic city of Shusha, some 15 kilometers (9 miles) from the Nagorno-Karabakh capital, Stepanakert, on Nov. 1, 2020, during the ongoing fighting between Armenia and Azerbaijan over the breakaway region. - KAREN MINASYAN/AFP via Getty Images

Turkey’s state run TRT news channel declared in a tweet slugged “Breaking News” Wednesday that Azerbaijan had declared victory in its ongoing war with Armenia over the disputed Nagorno-Karabakh enclave. The conflict entered its sixth week with reports of indiscriminate attacks on both sides, which the UN says could amount to war crimes.

TRT deleted the tweet soon after it emerged that Azerbaijani President Ilham Aliyev was merely repeating claims in an interview with Italy’s La Repubblica that he has been making for some time: that his country has prevailed in the worst outbreak of hostilities between the former Soviet states in the southern Caucasus since they first went to war over the predominantly Armenian enclave inside Azerbaijan in 1991.

There is little doubt that the oil-rich South Caucasus nation has succeeded in reversing some of the humiliating losses it suffered when it lost around a fifth of its territory to Armenian forces and was forced to call off the fight in 1994. According to the latest field reports, Azerbaijani forces have clawed back a large chunk of territory occupied by Armenian forces in the area separating Nagorno-Karabakh from Iran for the first time in 26 years and have advanced to the critical Lachin corridor connecting Armenia proper to the enclave. “This has huge symbolic, strategic and political significance for Baku,” said Zaur Shiriyev, an Azerbaijan analyst for the International Crisis Group. Shiriyev said Azerbajianis believe that it is only a matter of time before Azerbaijani forces capture Shusha, the highest point in Nagorno-Karabakh, giving it strategic dominance over the entire enclave, including over the capital of the self-declared Republic of Nagorno-Karabakh.

Azerbaijan’s energy earnings have allowed it to build up an arsenal of sophisticated weaponry with precisely this moment in mind. Israel provided a fair amount in exchange for being allowed to use Azerbaijan to spy on Iran. But it was Turkey’s assistance — with hundreds of military trainers, armed drones and Syrian mercenaries reportedly deployed in Azerbaijan’s favor — that helped to decisively tip the balance. Some analysts contend, however, that there are signs that Turkey and Azerbaijan, which have effectively sabotaged attempts by Organization for Security and Cooperation in Europe mediators led by the United States, Russia and France to establish an enduring cease-fire, are gearing to wind down the campaign. TRT’s premature declaration of victory on Azerbaijan’s behalf may have been spurred by official thinking in Ankara.

Richard Giragossian, director of the Yerevan-based Regional Studies Center, an independent think tank, offers several reasons why there is now hope for a genuine pause in fighting and a return to diplomacy.

In emailed comments to Al-Monitor, Giragossian said, “First, the pace of the Azerbaijani military advance has slowed, with the initial gains in territory in low-lying flatlands and plains south of Nagorno-Karabakh having become largely halted by the onset of new, much more daunting terrain of forests and mountains,” which give well-entrenched Karabakh Armenian forces an important defensive advantage. As such, “military logic mandates a halt, where Azerbaijan can better consolidate its territorial gain and leverage its position into greater diplomatic power.”

Giragossian also detects a shift in Turkish policy “whereby the recent visits to Baku by the Turkish foreign and defense ministers were more a prelude to disengagement and de-escalation” rooted in Ankara’s more strategic calculation of protecting the greater dividends of its relationship with Russia, which could involve concessions to Turkey in Syria versus a climb-down in Karabakh. Furthermore, Russia has now reached the end of its patience with Turkey over its intervention in Russia's backyard and is starting to push back, Giragossian said.

Russian grumbles over the presence of Syrian mercenaries are certainly growing louder.

Russian Foreign Minister Sergey Lavrov told Russia’s Kommersant that around 2000 fighters had joined the battle and that President Vladimir Putin had raised the matter in a phone call with his Turkish counterpart, Recep Tayyip Erdogan.

According to Syrians for Truth and Justice, an independent Syrian nonprofit monitoring human rights abuses in the nine-year-long Syrian conflict, foreign fighters deployed by Turkey to Azerbaijan include some 150 men from the Caucasus affiliated with a jihadi group active in northern Syria.

Russia’s rebellious Muslim-majority republics, Dagestan and Chechnya, have served as a fertile recruiting ground for the Islamic State and other jihadi groups. Their return to the region under Turkish auspices would likely be perceived as highly provocative by Moscow.

Russian forces have also set up a small outpost near the Armenian border with Lachin and said they will defend the Armenia militarily in keeping with a mutual defense pact should the need arise.

Will Ankara and Baku pay heed?  Ozgur Unluhisarcikli, Turkey director for the German Marshall Fund of the United States, said he believes that “Turkey has crossed a Rubicon” in its relations with Russia and is “in no mood to tell Azerbaijan to stop its offensive.” He said Armenian forces have lost a lot of the territory they could have used to barter with when it comes to the future status of Nagorno-Karabakh. “There is little left for Armenia to offer,” he told Al-Monitor.

Paradoxically, the more lives that are lost on both sides, the less incentive there is for either to call a cease-fire without enough to show for their sacrifices, said Shiriyev. “We are further from a cease-fire than we were two weeks ago when Russia brought the sides to together,” he told Al-Monitor.

Azerbaijan has not released any casualty figures. Armenia says it has lost over 1,200 people since the fighting erupted Sept. 27.

“With Azerbaijani forces so close to Shusha and Lachin, it would not be straightforward for Aliyev to de-escalate just now. He has said that without Shusha restored to Azerbaijani control, his mission will not be complete,” said Laurence Broers, associate fellow at the Russia and Eurasia program at Chatham House. “Society is mobilized in support of this goal and it could be politically costly to come within reach of such a significant symbolic goal and not attain it.”

Even if Yerevan were ready to negotiate a cease-fire, would the hawkish Karabakh Armenian authorities play along or continue fighting to retake lost ground? “Yerevan and Stepanakert are closely integrated on many levels,” but Nagorno-Karabakh's own forces have “some operational autonomy in the military field,” Broers said. “Whether to accept a disadvantageous position on the battlefield as a price worth paying for a cease-fire, or whether to fight back could become a divisive issue.”