The United States, Russia and France called for an immediate cease-fire as the ongoing conflict between Azerbaijan and Armenia over the mainly Armenian enclave of Nagorno-Karabakh entered its fifth day. 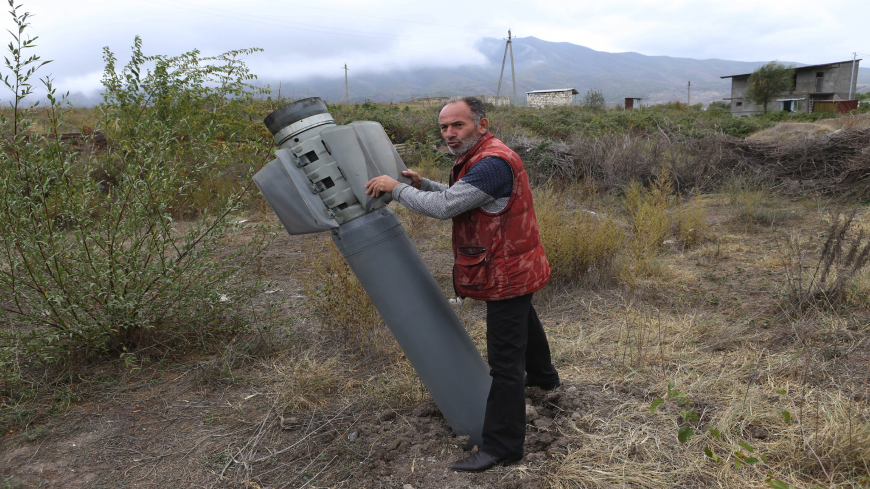 A picture shows a rocket shell in the Ivanyan community in the breakaway Nagorny-Karabakh region on Oct. 1, 2020. Armenian and Azerbaijani forces intensified their shelling on Oct. 1 despite calls from the United States, France and Russia for an end to days of fighting over the disputed Nagorny-Karabakh region that has left more than 130 dead. - HAYK BAGHDASARYAN/PHOTOLURE/AFP via Getty Images)

The United States, Russia and France called for an immediate cease-fire as the ongoing conflict between Azerbaijan and Armenia over the mainly Armenian enclave of Nagorno-Karabakh entered its fifth day. The statement, signed by President Donald Trump, Russian President Vladimir Putin and French President Emmanuel Macron, called on the warring parties to resume negotiations for a peaceful resolution of the 32-year-old dispute over the mountainous area that Azerbaijan and Armenia both claim.

The three countries calling for a cease-fire are permanent members of the Minsk group established after the war first erupted between the former Soviet states in 1988, leaving Armenia in control of Nagorno-Karabakh and large swathes of Azerbaijani territory around it. Turkey backed Azerbaijan, while Iran helped Armenia. Russia played on both pitches, as it typically does in its former Soviet dominions to render itself indispensable.

Both Azerbaijan and Turkey have rebuffed the Minsk group’s calls for a cease-fire and vowed to fight on. Turkish President Recep Tayyip Erdogan apparently agrees that the war must go on. He said the Minsk group’s calls for a cease-fire were “unacceptable,” and if they were really seeking a solution, then Armenia had to withdraw from all the territories it had occupied and allow hundreds of thousands of Azerbaijanis displaced by the war to return.

Armenian Prime Minister Nikol Pashinian has ruled out any withdrawal, saying Nagorno-Karabakh is an existential matter for his nation of 3 million.

Azerbaijan's President Ilham Aliyev says the war won’t end until Azerbaijan regains full control over the enclave and surrounding territories. And Erdogan is egging him on.

Russia revealed? Turkey is providing military support to Azerbaijan and, in an unusual twist, finds itself on the same side as Israel, which is also reportedly aiding Azerbaijan. The oil-rich republic in the southern Caucasus serves as a critical base for Israeli surveillance of Iran.

Russia’s stance remains a question of fierce debate. Today’s joint statement suggests, however, that contrary to speculation, it has no plans to crash the Minsk process or manage the conflict and its outcome in tandem with Turkey instead.

The Kremlin has aired its discomfort with Erdogan’s bellicose rhetoric in support of Azerbaijan.

It’s also irked by reports that Syrian rebel mercenaries with a record of abuses have been flown in to fight on the side of Azerbaijani forces. Turkish Foreign Minister Mevlut Cavusoglu and his Russian counterpart, Sergey Lavrov, held a phone call today to discuss the latest developments in Nagorno-Karabakh. No details were given.

Enter Macron: France’s President Emmanuel Macron, who has been pushing back against Turkish muscle-flexing in the Eastern Mediterranean and Libya, upped the ante today, blaming Azerbaijan for the fiercest fighting over Nagorno-Karabakh since 1994.

Macron said Azerbaijan had fired the first missiles triggering hostilities on Sunday. In a further poke in Erdogan’s eye, Macron said France had concrete information that Syrian jihadis had been ferried via the southern city of Gaziantep on the Turkish-Syrian border, and that this represented “a grave” turn of events that would be raised during a summit of EU leaders that kicked off in Brussels today.

What's next? The EU bloc will be weighing what if any sanctions to impose on Turkey over its dispute with EU members Greece and Cyprus over exploiting the hydrocarbon wealth of the Eastern Mediterranean. Macron has been pushing for unspecified sanctions. Austria’s right-wing conservative chancellor, Sebastian Kurz, is demanding that “red lines” be “finally set up” to rein in Erdogan. He says talks for Turkey’s full membership of the EU have to end and sanctions must be imposed.

Any such moves would bring Turkey’s already tottering economy to its knees.

Fearing chaos, Germany, which has an estimated 3 million Turkish origin people living within its borders, is opposed to harsh measures against Turkey. It’s been mediating between Turkey and Greece. Today the two countries announced they had established a deconfliction mechanism following a series of talks at NATO headquarters in Brussels. It remains to be seen what fresh crises lie in store as the war in Nagorno-Karabakh escalates and the death toll on both sides rises.

Know more: For background on the Nagorno-Karabakh, read the latest by Amberin Zaman. For the balance of forces in the war, read military expert Metin Gurcan's story.