The Turkish president is the author of a militarized regional policy that now stretches from the Caucuses to Libya. 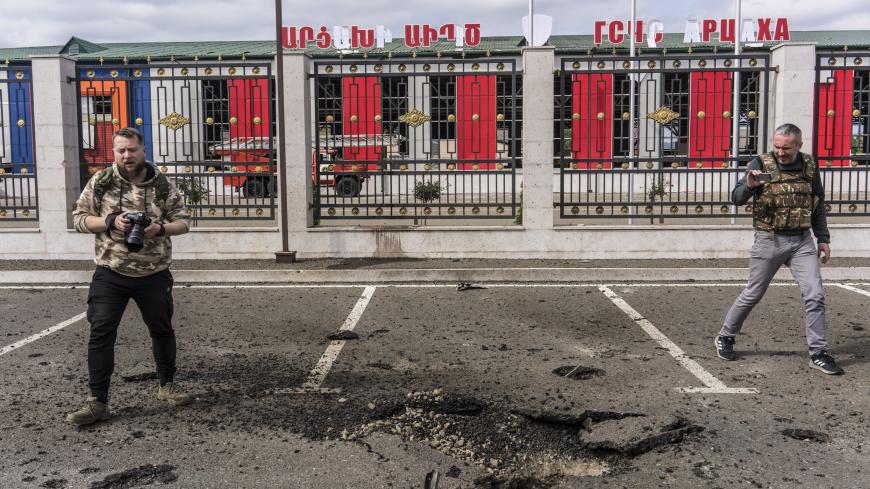 Journalists take pictures and video of a crater left by a bomb that fell outside a fire station on Oct. 2, 2020, in Stepanakert, Nagorno-Karabakh. - Brendan Hoffman/Getty Images

Turkish President Recep Tayyip Erdogan views the world with both grievance and a sense of opportunity.

In a major speech Oct. 1, he assailed the failures of the post-World War II international system, declaring, “There is no chance left for this distorted order, in which the entire globe is encumbered by a handful of greedy people, to continue to exist the way it currently does.”

Erdogan has some concessionary lines that "the existing [international] organizations may be able to meet those needs if they are restructured in an equitable way," but the tone overall is a mix of affront, ambition and Turkish exceptionalism.

For example, Erdogan railed against “those who ignored our country in the region for years — and confronted us with maps and demands that would imprison us into our coasts — first tried the language of threat and blackmail after the steps we took." He described Turkey as a country that “cannot use the same methods as the states that have no roots no traditions, and no morals, and which derive their power from colonialism and greed."

Erdogan’s approach speaks to Turkey’s Islamic and Ottoman past, including in his newly assertive role on the Palestinian issue, as Fehim Tastekin and Adnan Abu Amer report.

“We had to leave [Jerusalem] in tears during the First World War,” Erdogan said this week. “It is still possible to come across traces of the Ottoman resistance. So Jerusalem is our city, a city from us.”

Despite Erdogan’s professed willingness “to keep the dialogue channels open until the end” in its international relations, it appears that it is more often the thrill of the fight, and the military dimension to policy, as Metin Gurcan writes, rather than the tedium of the negotiating table, which carries the day, especially in Syria, Iraq, Libya and, most recently, Nagorno-Karabakh.

In Syria “until the last terrorist is destroyed”

In Syria, Erdogan faces a quagmire mostly of his own making, and he shows no inclination to pull back. He got Turkey involved early, backing elements committed to deposing Syrian President Bashar al-Assad during protests nearly a decade ago. That movement led to chaos that was exploited by al-Qaeda-linked groups and armed gangs to expand their footholds in the country.

Turkey’s troops and proxies still occupy parts of northeastern Syria, near the Turkish border, and will stay there, according to Erdogan, “until the last terrorist is destroyed.” Terrorist, by his lights, means not only the Islamic State, or Daesh, as he refers to it, but Syrian Kurdish forces that have been aligned with the United States, and which Turkey views as linked to the Kurdistan Workers Party (PKK), which is designated a terrorist group by Ankara and Washington.

The campaign against the PKK includes attacks on the group inside Iraq as well, which will “continue until we have completely eradicated these abysses of unrest, which the Northern Iraq Regional Administration is also uncomfortable with,” he said.

Shelly Kittleson reports here from Iraq on the Turkish military pressure on the PKK in Iraq’s Kurdistan Region.

And then there’s Libya, where Turkey has shifted jihadis it backed during the fight in Syria to Libya to fight on behalf of the Government of National Accord, which, like Erdogan, would consider itself to be in the Muslim Brotherhood, or Brotherhood fellow traveler camp.

All of this brings us to Nagorno-Karabakh, the Armenian-controlled enclave in Azerbaijan, which has been a mostly frozen conflict since 1994 until the outbreak in hostilities last week.

Amberin Zaman writes that Azerbaijan’s military action, which set off the recent escalation, “was not sparked by accident but was preplanned by Azerbaijan and its regional ally Turkey.”

Nagorno-Karabakh strikes a nationalist chord for Turks, who share an ethnic heritage with Azeris.

Zaman explains that Turkey's all-in support for Azerbaijan, including providing arms and training, can allow Erdogan “to claim credit for winning back Azerbaijani territory, however little, [which] would be an enormous boost to his droopy poll numbers in the midst of a looming economic crisis."

Erdogan has rejected an appeal by the United States, France and Russia for an immediate cease-fire, as Zaman reports here.

“I warn those who support this rogue state [Nagorno-Karabakh] that they will be held to account before the common conscience of humanity,” the Turkish president said.

Former US Vice President and Democrat presidential candidate Joe Biden tweeted that the Trump administration “must also demand others — like Turkey — stay out of this conflict,” as we report here.

Metin Gurcan breaks down the military balance between Armenia and Azerbaijan, and the pivotal role that Russia could play with both parties.

"From a political standpoint," Gurcan writes, "it seems fair to assume that neither Armenia nor Azerbaijan can use air power and ballistic missiles without Russian consent. Apparently, Moscow has not given the nod — at least for now — to the deployment of warplanes and ballistic missiles, a step that marks the threshold of a conventional war."

Despite denials by Ankara and Baku, there are reports of Syrian jihadis joining the fray, sent there by Turkey. Such an intervention by Turkey risks escalation with Russia, writes Fehim Tastekin.

"Turkey’s involvement in the conflict could be considered an attempt to shore up domestic support,” Tastekin writes. "But if Moscow comes to believe that Ankara has ulterior motives such as expanding its Turko-Islamist influence to the south Caucasus as part of Erdogan’s neo-Ottoman ambitions, it won't stand idle."

Meanwhile, as Turkish-Israeli relations go from bad to worse, both Ankara and Jerusalem are backing Azerbaijan in the conflict. Armenia recalled its ambassador to Israel because of Israel’s selling arms to Azerbaijan, as we report here.