Clashes between Azerbaijan and Armenia seem to have taken a dangerous turn with conflicting reports of Turkey bringing in Syrian mercenaries. 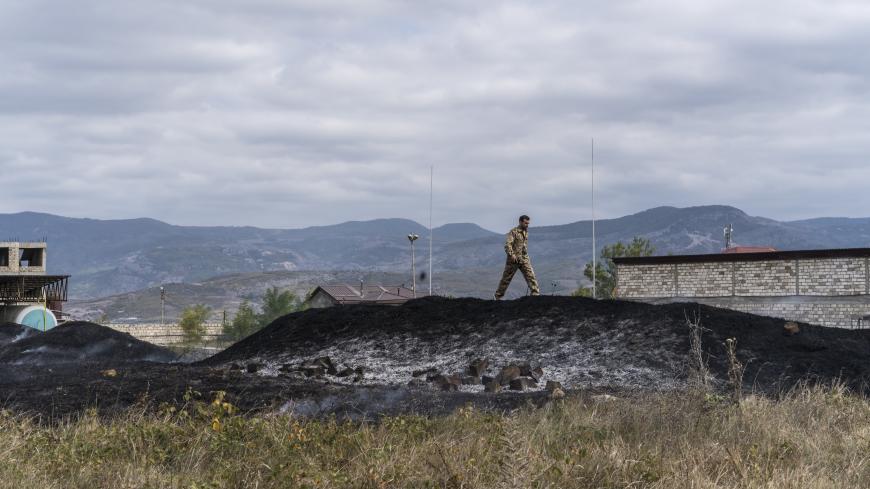 An emergency services member stands atop the site of a grass fire started by a bomb that fell nearby on Oct. 2, 2020 in Stepanakert, Nagorno-Karabakh. - Brendan Hoffman/Getty Images

Turkey’s direct intervention in the clashes in the southern Caucasus, which has been under the influence of Russia for over two centuries, risks a new confrontation between Ankara and Moscow. The international news media and Syrian local sources are abuzz with reports of Syrian fighters transported to Azerbaijan to support its battle against Armenia over the Nagorno-Karabakh conflict and occupied territories.

Despite denials by Ankara and Baku, some sources have already reported the first Syrian casualties in the clashes. According to Muzahem al-Salum, a former spokesperson of Jaysh Maghawir Al-Thawra, a Syrian rebel group that was once backed by the United States, the first group of Syrian fighters was dispatched to Caucasus a week ago before the fresh clashes Armenia and Azerbaijan resumed on Sep. 26. Salum claimed the fighters were recruited through a center set up by the Turkish-backed Sultan Murad Brigades in northern Syria.

Accordingly, a group of 150 fighters from Faylaq al-Sham reportedly crossed to Turkey from Afrin and then flew to Azerbaijan from Adana International Airport. The fighters were allegedly taken to training camps on two islands in the Caspian Sea for tactical training and told that their job would be to defend Azeri gas facilities. Al-Salum also claimed that the fighters were promised some $1500 a month and that the majority of the fighters were selected from Syrian Turkmen candidates out of concern for the language barrier. The Sultan Murat Brigade is reportedly expected to send some 2,000 fighters to Azerbaijan in the next couple of weeks.

Elizabeth Tsurkov, a fellow at the US-based Foreign Policy Research Institute, tweeted that dozens of Syrian fighters crossed into Turkey from northern Syria in mid-September, citing her conversations with Syrian fighters’ relatives and friends. She added that she wasn’t able to verify the reports that the fighters were sent to Azerbaijan, as contact with their families was cut off once they arrived in Turkey. She said some fighters had signed up for the deployment through WhatsApp and others at recruitment offices in the Turkish-controlled regions in northern Syria. Tsurkov also argued that the private Turkish defense company SADAT, which has close ties to the Turkish government, might have played a role in the recruitment operations.

Another confirmation came from a commander of the Syrian National Army. Speaking to Rudaw TV, Ziyad Haji Ubeyd said, “The fighters had to join the battle in Azerbaijan to feed their families.” He added that they are ready to go to war with the Turkish army wherever and if there is demand.

The Guardian reported that Syrian fighters “have signed up to work for a private Turkish security company as border guards in Azerbaijan” and that their training began a month ago. Two brothers from Syria who joined the program told the newspaper that they were living in Azez before their leaders helped them get to Afrin, where they were offered contracts of three to six months with salaries of $800-$1,200 a month to guard oil and natural gas facilities in Azerbaijan.

“Our leader told us that we won’t be fighting, just assisting in guarding some areas,” one of them was quoted as saying. “Our salaries aren’t enough to live on, so we see it a great opportunity to make money.”

“When we first started being offered work abroad in Libya, people were afraid to go there, but now there are definitely thousands of us who are willing to go to either Libya or Azerbaijan,” another fighter told The Guardian. A Syrian National Army commander told Reuters some 700-1,000 fighters are planned to be sent to Azerbaijan.

The Syrian Observatory for Human Rights (SOHR) also reported that hundreds of fighters from the Sultan Murat Brigade and El Amshat Brigades traveled to Azerbaijan via Afrin with the promise of $1,500-2,000 monthly salaries. SOHR put the number of fighters sent to the region so far at 320.

Armenia capitalized on the rumors, with its ambassador to Russia claiming that the number of fighters sent to the region has reached some 4,000.

While some observers are skeptical, pointing out the denials by Ankara and Baku, Syrian journalist Hussein Akoush reported on the first Syrian casualties of the war. Akoush identified the dead as Muhammad Shaalan of Atarib and Talha from Kafr Halab. SOHR confirmed the news.

As happened in Libya, the reported transfers to Azerbaijan have also sparked rifts among the Syrian rebel groups. Some factions accuse Turkey of undermining the Syrian revolution for its own interests.

Syrian Salafist jihadists have condemned the move. Sheik Abu Yakzan al Masri of Hayat Tahrir al-Sham “abandoning the jihad to get involved in a war between a secular Shite and a Christian army" "one of the biggest sins.” Abdulrazak al Mahdi of Ahrar al-Sham criticized the mobilization campaign for Azerbaijan.

The Turkish authorities have responded to the reports by spreading blame, claiming that Armenia was training Syrian Kurdish fighters to deploy in the occupied territories.

Armenia should “send back the mercenaries and terrorists they brought from abroad and evacuate the Azerbaijani territories they occupied," Turkish Defense Minister Hulusi Akar told the state-run Anadolu News Agency. Volunteers from the Armenian diaspora and Turkey had taken up arms in the Nagorno-Karabakh conflict in the past.

Turkish President Recep Tayyip Erdogan’s confirmed the transfer of Syrian fighters to Libya after initial denials. With this evidence that the Syrian militias have become a new intervention tool for Turkey, so the Azerbaijani buildup should come as no surprise.

The mobilization of jihadi forces in the Caucasus is alarming for several reasons. First, Azerbaijan is a predominantly Shiite country. The Salafist jihadist rhetoric against Shiism has fostered sectarian hostilities among the Syrian National Army factions, and the Turkmen groups transferred to Azerbaijan are no exception.

Indeed, in an unverified audio recording circulating on the social media, a Syrian rebel allegedly complains about the transfers. “They are our enemies more than Jews and Christians We won’t fight or stand with them in any way,” the man reportedly said in reference to the Azeri army.

Although most of the fighters appeared to have signed up for the money, the presence of Sunni Syrian fighters in predominantly Shiite Azerbaijan is quite problematic for Russia in particular, as Moscow cannot stand idly against the risk of a Islamist jihadist revival. The rise of Wahhabism has been among the top national security concerns of the Russian security establishment since Chechnya-based armed militants led by Shamil Basayev seized the control of two villages in Dagestan and declared Sharia in the territories in 1999. Dagestan, which neighbors Azerbaijan, remains a stronghold of the Islamist vein in Russia.

Russia’s primary goal in getting involved in the Syrian conflict was to keep jihadists away from the region and prevent the return of the Chechen Islamists who joined the fighting in Syria. Once a corridor linking Syria and the south Caucasus is established, it would be hard to control.

Turkey’s involvement in the conflict could be considered an attempt to shore up domestic support. But if Moscow comes to believe that Ankara has ulterior motives such as expanding its Turko-Islamist influence to the south Caucasus as part of Erdogan’s neo-Ottoman ambitions, it won't stand idle.

As Unal Cevikoz, a retired Turkish diplomat who oversaw the Caucasus file in the Turkish Foreign Ministry, put it, the unfolding developments in the South Caucasus put the region at risk of a Turkey-Russia confrontation.