Will Russia recruit Syrian Kurds to fight in Armenia-Azerbaijan conflict?

While Russia will likely avoid direct involvement in the conflict between Azerbaijan and Armenia, there are signs it could draw lessons from Libya and recruit fighters from Syria to do its bidding. 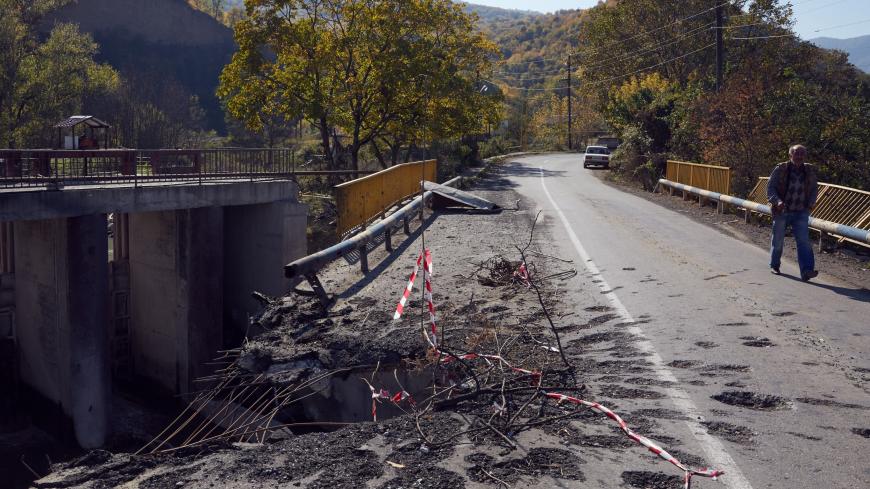 A man walks on Oct. 14, 2020, across a bridge connecting Armenia with Nagorno-Karabakh that was hit by an Azerbaijani missile much earlier, in Getavan, Nagorno-Karabakh. - Alex McBride/Getty Images

The Russian Foreign Intelligence Service recently issued a statement saying that the escalating armed confrontation in Nagorno-Karabakh, "like a magnet, attracts militants from various kinds of international terrorist structures."

The intelligence service said that according to the information available to it, "Mercenaries from international terrorist organizations fighting in the Middle East — in particular Jabhat al-Nusra, Firqat Hamza, the Sultan Murad Division, as well as extremist Kurdish groups — are actively entering into the conflict zone. Moreover, we are talking about hundreds and even thousands of radicals hoping to make money on the new Karabakh war.”

The Oct. 6 statement, however, does contains some factual inaccuracies. For example, one of the groups named, Jabhat al-Nusra, has not existed since early 2017, when it merged with other groups to become Hayat Tahrir al-Sham. Also, while the statement included Firqat Hamza and the Sultan Murad Division as being among the "international terrorist organizations" operating in Nagorno-Karabakh, these groups are neither on UN international sanctions lists nor are they recognized as terrorist organizations under Russian law. Likewise, the names of these groups do not appear on the corresponding federal list of organizations banned in Russia. While the presence of fighters from Firqat Hamza and the Sultan Murad Division in the Armenian-Azerbaijani conflict is supported by various forms of evidence, there is no convincing evidence of the presence of militants from the Hayat Tahrir al-Sham terrorist organization in Azerbaijan.

On the other hand, such a strong statement regarding the forces that Turkey is allegedly using to support Azerbaijan was “balanced” by the intelligence service's mention of the presence of “Kurdish extremists” in the conflict zone. In this case, the statement was referring to groups that support Armenia. The names were not directly stated, likely in order not to jeopardize relations between Moscow and the Syrian Kurds.

The deployment of Syrian militants to Azerbaijan has been a very sensitive topic in Russia. Russian public opinion does not differentiate between the moderate and extremist opposition in Syria, whether the aforementioned pro-Turkish Syrian groups or fighters from radical terrorist organizations. While the intelligence service’s mention of Jabhat al-Nusra only adds fuel to the fire and could be used as an argument in favor of a future intervention by Moscow in this conflict on the side of Yerevan — under the pretext of fighting terrorism — it would not be without challenges. Armenia is separated from Russia by Georgia and Azerbaijan, so Moscow would not have the opportunity to obtain a corridor for the transfer of their troops to Armenia or for the use of military aviation.

At the same time, the arrival of Syrian militants in Azerbaijan is not so much a factor for possible intervention in the conflict as a source of internal criticism of the Kremlin. Despite the latter’s repeated statements, it has been unable to achieve the main “internal” goal of Moscow’s military operation in Syria: to prevent the emergence of terrorist groups along the perimeter of Russia's borders. Now the Syrian militants are in Azerbaijan, a mere 50 miles from the border with Russia.

In this context, it was beneficial for the Russian side to stress the presence of “Kurdish extremist groups,” which, according to the intelligence service, came to participate in the conflict on the side of Armenia. While there is no direct evidence of this yet, the potential deployment of Kurdistan Workers Party units or affiliated organizations in the zone of the Armenian-Azerbaijani conflict would be extremely sensitive for Turkey. If confirmed, instead of Ankara having eliminated the “Kurdish threat” at the southern borders of the country, a “terrorist hotbed” could be being created at Turkey's northern borders. This could be one price of Turkey's support for Azerbaijan.

It cannot be ruled out that in the future, if the cease-fire in Karabakh is disrupted and full-scale hostilities resume, Russia would be interested in the involvement of additional military contingents friendly to Yerevan and hostile to Ankara’s regional forces. Armenia, which has very limited resources, will find it increasingly difficult to fight for Nagorno-Karabakh without external assistance. Kurdish groups could become such an element of support and counterbalance the fighters of the Syrian National Army attracted by Ankara.

If the conflict cannot be stopped and it becomes protracted, then the Russian side could also be forced to follow a scenario of supporting Armenia that resembles one it tested in Libya. That is, Moscow would avoid open military intervention in the conflict and direct assistance to the Armenian side. It should be borne in mind that in fact the Armenian armed forces are participating in hostilities, but they do it under the flag of the unrecognized “Republic of Artsakh" on the territory of Azerbaijan. In this case, Moscow recognizes the territorial integrity of Azerbaijan and considers the authorities of "Artsakh" illegitimate, but leaving without providing support for its ally would be too great a reputational loss for Russia. A similar situation was seen in Libya, where eastern warlord Khalifa Hifter also lacked legitimacy and Russia could not openly intervene on his side. At the same time, the Wagner group came in to support Hifter’s forces.

Yet there are questions over whether Russia could use private military companies such as Wagner in the conflict in Nagorno-Karabakh. On the one hand, the appearance of Russian or Russian-speaking mercenaries with "Slavic appearance" would most likely be regarded by Baku as direct Russian participation in the occupation of Azerbaijani territory and military support of the occupying forces. Russia would like to avoid such accusations. On the other hand, Russian businessman Yevgeny Prigozhin, who according to some sources oversees the activities of Russian private military companies, spoke out in support of Azerbaijan, blaming Armenia and the United States for unleashing the conflict. In an interview with the Turkish daily Aydinlik, he said he sees no problem in the fact that Ankara is providing military assistance to Baku.

“As long as the Turks do not cross the border of Armenia, they have the legal right to interfere in the Karabakh conflict,” Prigozhin said. He claimed that after Prime Minister Nikol Pashinyan came to power in Armenia, many American nongovernmental organizations appeared in the country. “This is the crux of the problem. Americans are provoking conflict.”

At the same time, Russian political forces interested in supporting Armenia have other opportunities to provide nonstate military assistance to Yerevan, using foreign fighters instead of the Wagner group. A similar practice has already taken place during the Libyan conflict: In order to avoid excessive attention to persons with European appearance operating in the ranks of Hifter’s Libyan National Army, Syrians recruited by Moscow (with the help of the Bashar al-Assad regime's special services) began to go to Libya.

According to the news website Newsru, the process of transferring Syrians to Libya from Damascus began in 2019 and the first groups included captured Islamic State militants.

There are also reports that Russian recruiters joined efforts to involve Syrians in the conflict in Libya by opening recruitment points in southern Syria, Damascus and Deir ez-Zor. Some reports say former opposition fighters were promised a monthly salary of $1,000 and exemption from criminal prosecution in exchange for agreeing to fight abroad. However, not all of these commitments were fulfilled in full after the return of these Syrians from Libya.

A similar scheme to that of using mercenaries in Libya could be used to support Armenia. However, in this case, Syrian Kurds instead of Syrian Arabs would be involved in the fighting on the side of the Armenian formations. These Kurds would not necessarily be YPG fighters. It is known that the Russian side tried at the end of 2019 to attract Syrian Kurds to participate under the banner of its proxy forces by organizing recruitment centers for militants in the cities of Amuda and Tel Tamr. Also, the appearance of Kurdish militants in Armenia would not become something sensational for the local population, since a significant diaspora of Yazidi Kurds lives in the country, which maintains close ties with Syrian and Iraqi tribesmen.