Spurred by the killing of a Turkish Consulate staffer in Erbil last month, the Iraqi Kurdish administration is stepping up its cooperation with Turkey to rein in PKK activities in northern Iraq. 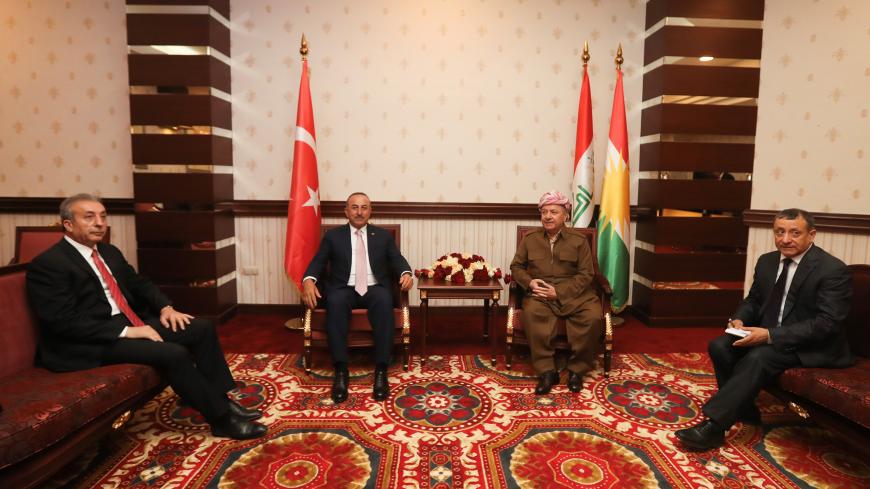 Turkey’s National Security Council said in a statement last week that a cross-border military crackdown on the Kurdistan Workers Party (PKK) in the Hakurk region of northern Iraq was “continuing successfully.” The statement stressed that operations Claw-1 and Claw-2, which began in late May and mid-July, respectively, would continue until Hakurk is “fully cleansed” of the PKK.

Al-Monitor reported in June that the Turkish military seeks to establish a permanent presence in Hakurk, which is adjacent to Mount Qandil, the longstanding home base of the PKK and its route for infiltrations into Turkey. Turkey's goal requires it to set up of permanent bases in areas close to the border, such as Kani Rash, Bani, Shapan, Sidekan and Mawana by November, before the onset of harsh winter conditions in the mountainous region. Road construction is underway to ensure supply routes for the bases. Additionally, Ankara wants to reinforce its existing fixed bases in the border regions of Kani Masi, which controls the Metina area to the north, and Amedi and Suri, which control Bamerni and Gara. It will deploy more tanks, mine-resistant vehicles, indirect fire elements and commando units in northern Iraq as well as increased air surveillance and reconnaissance drones.

Turkey’s intensified military activity aims to increase pressure on the PKK’s strategic heartland in Qandil and curb the mobility of PKK groups across northern Iraq, which is run by the Kurdistan Regional Government (KRG). Once full control is secured over Hakurk, Qandil is next in line, security sources in Ankara told Al-Monitor.

The anti-PKK operations have proceeded with Erbil’s consent, and Ankara is satisfied with the KRG’s cooperation. Remarkably, the KRG’s tacit endorsement of Turkey’s efforts to subdue the PKK has turned into active support since the July 17 assassination of an intelligence-affiliated staffer at the Turkish Consulate in Erbil. Osman Kose was shot dead in a posh restaurant in Erbil by a PKK-linked assassin. Peshmerga forces, equipped with light armored vehicles, reinforced security in Amedi, Shladze, Bamerni and the rural areas of Zakho in late July, local Kurdish sources told Al-Monitor. Since the beginning of August, the peshmerga have also erected new checkpoints on routes leading to Hakurk and Qandil. The measures suggest that Erbil is now actively cooperating with Ankara to restrict PKK mobility in northern Iraq.

The prevailing view among observers is that Kose’s assassination has strengthened the anti-PKK camp in the KRG. There is a growing apprehension that PKK activities in the region pose a security risk to Iraqi Kurds. Many in the KRG establishment worry that the PKK’s military presence in Hakurk and Qandil will jeopardize the achievements and gains of Iraqi Kurdistan, the sole Kurdish region in the Middle East that enjoys freedom and security, and that the Iraqi Kurds will pay the price for the PKK belligerence.

What about the stance of other key actors in the region?

Washington has largely kept mum on the Turkish operations since they markedly intensified about three years ago. The US military, which controls northern Iraqi airspace, has not resorted to any radar, radio or GPS jamming and deception measures against the increased Turkish air activity. Turkish warplanes, helicopters and drones have not faced any interception attempts, and the US Consulate in Erbil has made no critical statement on their activities. Ankara interprets this as the United States keeping still on the operations. In previous Turkish operations in northern Iraq, the United States used to share intelligence with its NATO ally. This, however, is not currently the case, sources told Al-Monitor, stressing that the Turkish military relies entirely on its own capabilities for intelligence, surveillance and reconnaissance.

Ankara also sees Baghdad's silence on the operation as a positive sign.

Meanwhile, Iran, which grapples with its own PKK-linked Kurdish militants, has been shelling PKK targets in Hakurk and Qandil, though a ground cross-border operation does not appear to be in the cards at present. For Ankara, an operational victory in Hakurk is a prerequisite to talk Tehran into a future joint operation in Qandil. Hence, it is fair to assume that Tehran is closely watching the developments in Hakurk, trying to gauge the Turkish army’s operational effectiveness.

In terms of domestic politics, the operation has been beneficial to President Recep Tayyip Erdogan and his Justice and Development Party, especially in light of Ankara’s predicament over Kurdish-held territories in northeastern Syria. A slew of threats and warnings by Erdogan and Defense Minister Hulusi Akar has built up anticipation in the Turkish public for an imminent incursion into areas east of the Euphrates held by the PKK-linked People’s Protection Units (YPG). As Turkish-US talks on a safe zone drag on and Ankara has yet to launch an incursion, success stories about Operation Claw are useful in assuaging the public. Almost on a daily basis, the Defense Ministry releases information about PKK militants “neutralized” in the operations, as well as the seizure of PKK arms, making big news headlines.

Can Turkey take full and permanent control of Hakurk, something it has failed to achieve thus far in the 35-year conflict with the PKK? Compared to the past, it has some advantages today, namely, improved capabilities in precision airstrikes, armed drones, electronic and signal intelligence, tactical ballistic missiles, counter-IED means, cold weather warfare, day and night vision, and surveillance. All this was achieved thanks to progress in Turkey’s defense industry, as well as Erbil’s assistance with human intelligence and logistical support. Should Turkey succeed, the PKK would suffer an unprecedented setback in terms of losing field control, influence and assertiveness in northern Iraq. This, in turn, would make for a solid trump card for Ankara in any prospective bid to convince Erbil, Baghdad and Tehran to engage in a joint offensive on Qandil.

Ankara knows that the road to Qandil goes through Hakurk, but the tough terrain and harsh weather will be no less challenging than the PKK’s armed militants in the coming months. With an average elevation of 2,000 meters (6,500 feet), the rugged terrain of Hakurk is even tougher from November to March, as temperatures fall to as low as -40 degrees Celsius (-40 degrees Fahrenheit) at night. Snow cover often exceeds two meters (6.5 feet), and fog and storms reduce visibility for weeks at a time. Maintaining its presence in the area throughout winter without closing its permanent bases will be a challenge for the Turkish military. If it succeeds in gaining field control and forcing the PKK to retreat from Hakurk by the spring, Turkish boots on the ground in the Qandil area in the summer will not be a surprise.