What's behind Turkish threats to invade PKK stronghold in Iraq?

Turkish leaders have raised the specter of a ground offensive on the Qandil Mountains in northern Iraq, home to the main camps of the PKK, but the motive and viability of such an operation remain questionable. 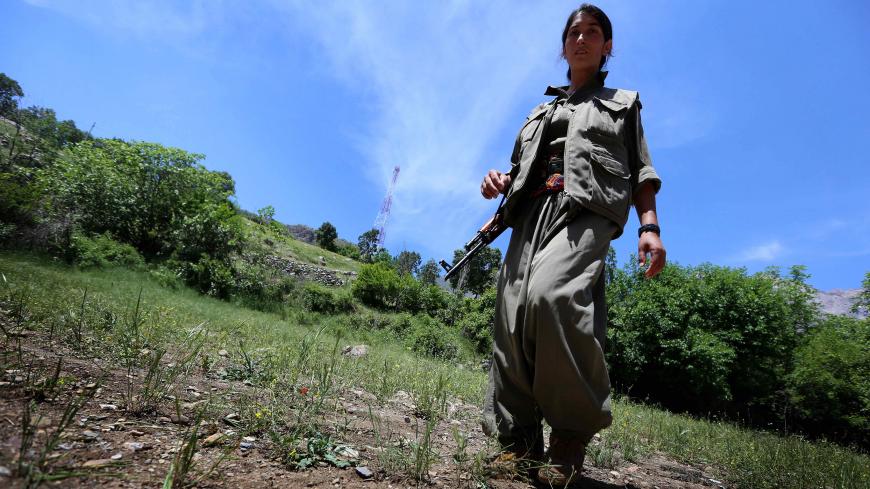 A female member of the anti-Iranian Party for a Free Life in Kurdistan carries her weapon as she walks through their base deep in the Qandil Mountains of northern Iraq's Kurdish autonomous region, May 5, 2014. - SAFIN HAMED/AFP/Getty Images

DIYARBAKIR, Turkey — A flurry of statements by Turkish leaders in recent days have heralded a ground operation on the Qandil Mountains in northern Iraq, where the leadership and major camps of the Kurdistan Workers Party (PKK) are based.

The warnings come amid heightened Turkish efforts to curb Kurdish militants, including a military campaign in northern Syria and the walling of borders, but also in the midst of a heated election campaign dominated by nationalist bluster, raising questions over Ankara’s motive.

Turkish Interior Minister Suleyman Soylu was the first to reveal June 2 that Turkish troops had penetrated 26-27 kilometers (some 16 miles) into northern Iraq, advancing toward Qandil. “We are almost there. We will not let that treacherous setup stay there,” he said, referring to the PKK, which Ankara considers a terrorist group over its armed insurgency since 1984. President Recep Tayyip Erdogan said the following day during a campaign trip to Diyarbakir that “Qandil’s turn is coming." Government spokesman Bekir Bozdag followed up with remarks after a Cabinet meeting that “anything can happen anytime” regarding Qandil.

Al-Monitor’s Metin Gurcan had reported in April that Turkish commandos were inside northern Iraq, quietly putting up military outposts in the Sidekan area, north of Hakurk, which is adjacent to Qandil and a major route for PKK infiltrations into Turkey. Ankara’s objectives, he wrote, were “to eliminate the PKK’s setup at Sidekan” that allows infiltration into Turkey and “to ensure 24/7 domination” of the area through temporary military camps while opening a corridor to Qandil.

The low-key advance proceeded amid official silence, though Turkey’s regular airstrikes in the region continued and reports appeared occasionally in the media about a ground incursion. Things appeared to be heating up in recent days, as the military reported the deaths of several soldiers in clashes in northern Iraq, without revealing details. Some social media accounts, meanwhile, shared images of Turkish troops in villages in the area.

According to PKK sources, the ground incursion began from the Hakurk and Bradost regions following airstrikes mid-December. On March 11, the PKK said the operation had entered a new phase, as the troops backed by artillery sought to seize control of the Bradost region.

Now, with the louder statements coming out of Ankara, the Turkish military appears to have set its sights on Qandil, which, for the large part of the Turkish public, is synonymous with the PKK itself. But how realistic is the prospect?

The first hurdle that comes to mind is the terrain. Qandil is a sprawling mountain range that abuts both the Turkish and Iranian borders of Iraqi Kurdistan and abounds with deep ravines, cliffs and caves. Due to the formidable topography, coupled with regional political constraints, “cleansing Qandil” has remained an elusive aim for successive Turkish governments, despite relentless air raids on PKK hideouts in the area.

Aydin Selcen, former Turkish consul general in Erbil, the capital of the Kurdistan Regional Government (KRG), believes that a ground operation targeting Qandil would be “neither realistic nor rational,” given both geography and politics.

“The Turkish military has been inside Iraq since the early 1990s [in various forms], including liaison points, bases, forward operational bases, seasonal deployments around bases … and various larger-scale operations from time to time,” Selcen told Al-Monitor, adding that the available information did not yet suggest that an operation “to conquer Qandil” was underway.

“This, I think, would be neither a realistic nor a rational objective in terms of scope, topography and regional politics,” he said. “I don’t believe an operation on such a scale could be launched and conducted without the consent of Baghdad and the support of Tehran and against the will of Erbil and the KRG public.”

Indeed, Foreign Minister Mevlut Cavusoglu made sure to emphasize regional cooperation, including the United States, when he was asked June 5 about any move on Qandil. “There will be a four-way cooperation between Turkey, the United States, Baghdad and Erbil [in the fight against the PKK], because the PKK is also the enemy of Erbil,” he said, adding that this would involve intelligence sharing.

The Iraqi Kurdistan Democratic Party (KDP), which has enjoyed close ties with Ankara, blames the PKK for Turkish incursions. “They would not have crossed the border if the PKK were not there,” KDP member Ali Awni said June 4, without explicitly confirming the advance of Turkish troops.

Erbil-based journalist Hemin Hosnaw, who is closely familiar with the region, told Al-Monitor that the Turkish soldiers had reached the Lelkan hills in the Bradost region, about 50 kilometers (some 31 miles) from Qandil. “It looks close, but it is a long distance in military terms and an operation seems difficult,” he said.

Hosnaw described in detail the strategic points that Turkish troops would have to secure en route to Qandil, including the town of Sidekan and mountainous areas riddled with landmines — remnants of the Iran-Iraq War — as well as highlands stretching to the Iranian border. “The Iranian military takes position on the hills, especially during the summer, and dominates the whole region. In other words, an operation without Iran’s consent will be impossible,” Hosnaw opined.

Additionally, the Turkish troops would have to pass through many settlements on the route, he noted. “If Turkey still launches an operation despite all those difficulties, it would be the most difficult and riskiest one in its struggle against the PKK,” he said, stressing that the topography of the region would be to the PKK’s advantage.

Though Cavusoglu spoke of cooperation with Baghdad and the KRG, Ankara cannot afford to disregard Iran either.

If a ground offensive on Qandil is such a difficult prospect, why would Turkish troops have advanced so deep into northern Iraq? Turkey will gain a big advantage against the PKK if it manages to control the supply lines and infiltration routes of the PKK. Hence, keeping the PKK away from Turkish borders is the first reason that comes to mind.

Alternatively, many suspect the heightened rhetoric could be a prelude to a military move to boost the government ahead of the June 24 polls, in which Erdogan and his Justice and Development Party (AKP) face a stronger opposition challenge than ever.

In a June 6 column, veteran Milliyet columnist Guneri Civaoglu recalled how Turkey’s 1974 Cyprus intervention and the 1999 capture of PKK leader Abdullah Ocalan had proved huge political boons for the ruling parties at the time. “Can the seizure of Qandil cause [similar] electoral storms?” he asked. “No doubt, it would create a strong wind at least. And Erdogan and the AKP does not really need a big jolt in the vote percentages. Five or six points will suffice.”