Turkey is considering setting up additional military infrastructure in Iraqi Kurdistan as its operations against militants there continue. 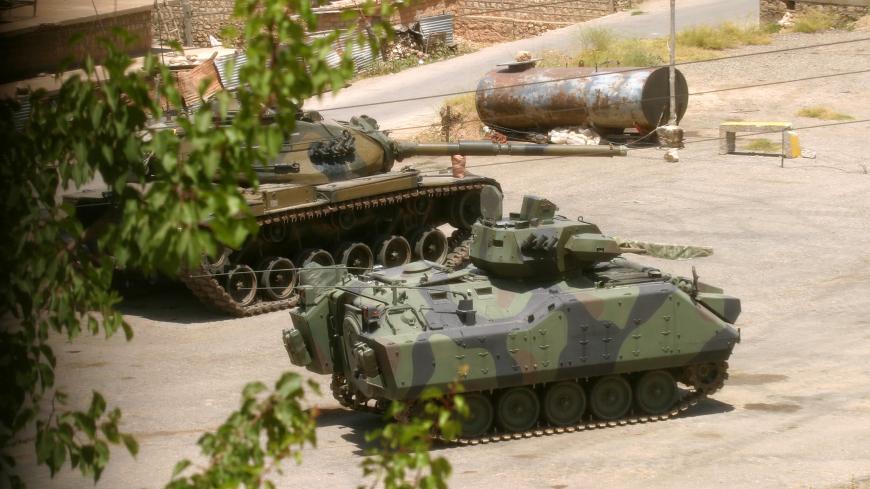 Turkey is planning to maintain a permanent presence in northern Iraq in the aftermath of the ongoing land and air operations against the Kurdish militants there, security sources told Al-Monitor. Turkey’s Operation Claw against outlawed Kurdish militants Iraqi Kurdistan’s northern Hakurk region has been going on for nearly a month.

Hakurk is located on some 32,000 acres next to the Mount Qandil, the strategic headquarters of the outlawed Kurdistan Workers Party (PKK). The Kurdish peshmerga cannot control this area because of its rough terrain and harsh weather conditions. Turkey has said it has so far killed or captured 51 PKK militants and destroyed more than 100 shelters and logistics facilities in the region. Turkey along with most Western powers consider the PKK a terrorist organization.

Turkey’s domestically produced surface-to-surface Bora missile was used for the first time in the operation backed by TB-2 armed drones and F-16s, all of them commanded from the Turkey’s southeastern border province of Hakkari.

With Bora missiles and Turkey’s Storm Howitzers deployed across the border, Ankara has boosted its 40-kilometer (27-mile) maximum range of fire to 280 kilometer (174 miles). Ankara is sure to use more Bora missiles against PKK targets in the future in its fight against terror in Iraq and Syria.

Security sources Al-Monitor spoke with in Ankara say the Operation Claw resembles the 1997 Operation Dawn, in which some 6,000 Turkish soldiers and about 8,000 peshmerga took part. At the end of that operation, which went on for three months, the Turkish army with the support of Kurdish peshmerga set up military bases in northern Iraq. With that operation, in addition to the battalions already in the Iraqi Kurdistan towns of Kanimasi and Bamami, Turkey erected special forces bases in areas of Zakho, Duhok, Batufa, Begova, Ahmadiyah and Shiledza. The deployment also enabled the Turkish army to form three defensive lines against the PKK at Gara Mountain, Metina Mountain and Zap-Avasin Basyan regions, severely limiting the PKK’s mobility in northern Iraq.

A well-placed security source who didn’t want to be identified it's difficult to deploy and operate in Hakurk with its harsh weather and tough terrain, which may explain why Ankara is planning to stay for the long term in the region and not rely on hit-and-run strikes as it did in the 2008 Sun Operation.

The security source said Ankara plans to establish a small security zone at PKK-controlled Hakurk through this operation and with the active support of the Kurds of Erbil and approval of Baghdad. The zone is intended to restrict PKK’s mobility and contribute to Turkey’s border security.

“We know that neither Baghdad nor Erbil have the strength to expel the PKK from Hakurk on their own,” the source told Al-Monitor.

Sources Al-Monitor consulted said in future phases of Operation Claw, the Turkish army and peshmerga forces may carry out joint military operations just like in 1997 and after the PKK is routed, the region may be placed under peshmerga control. They pointed out that Operation Claw was launched immediately after the Ankara visits of Iraqi President Barham Salih and Prime Minister Adil Abdul Mahdi at the end of May. Turkish Foreign Minister Mevlut Cavusoglu attended the inauguration ceremony of new KRG President Nechirvan Barzani.

It is obvious that Erbil fully supports Turkey’s Hakurk operation but Baghdad has remained silent.

The security sources also pointed out economic aspects of Operation Claw. Noting that both Ankara and Erbil are keen to develop bilateral economic ties, Operation Claw also has the goal of developing permanent commerce between Kurdish Sulaimaniyah and Turkish military zones. As in Operation Dawn, Turkish special forces and peshmerga will secure the roads and the Sulaimaniyah-Derecik (Hakkari) link could help create a lucrative economic basin.

But three important factors could make Ankara’s mission difficult. First there is the Turkish military's manpower problems, with its already overstretched commando and special forces units. Another question is how far Erbil’s Kurdish peshmerga will support Ankara’s demand for close cooperation and even joint operations against the PKK in the field. Finally, winter conditions will prevail after October.