Is this a new era in Turkey's fight against PKK?

Targeted killings of PKK Central Committee member Diyar Gharib Muhammed in Qandil on June 27 and Turkish intelligence agency-affiliated Turkish diplomat Osman Kose in Erbil on July 17 mark a major shift in the characteristics of the armed conflict between Turkey and the outlawed Kurdish militant group. 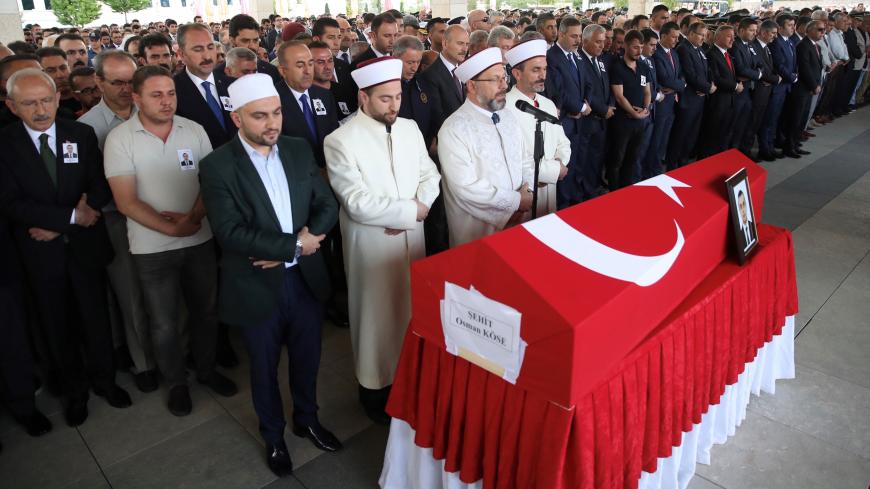 On July 17, Turkey was shaken by news of the assassination of a Turkish diplomat on duty abroad. The assassination may signal the opening of a new phase in the bloody 35-year-old conflict between Turkey and the outlawed Kurdistan Workers Party (PKK), which Turkey — along with several Western powers, including the United States — considers a terrorist organization.

Osman Kose — although not officially identified as associated with the Turkish intelligence agency but said to be on a special mission as a diplomat at Turkey’s consulate in northern Iraq’s Erbil — was assassinated inside of a high-class Turkish restaurant in Erbil with a silenced gun fired from short range.

Before Kose’s assassination, Turkish forces on June 27 killed Sulaimaniyah-born Diyar Gharib Muhammed — one of seven members of the PKK’s Central Committee. A Turkish F-16 struck his vehicle with the assistance of human intelligence provided by Turkey’s National Intelligence Organization (MIT) in the Kortek Bend area of Qandil in northern Iraq.

According to a security source in Ankara who refused to be identified, Gharib Muhammed was responsible for the PKK’s organization in Iraq, particularly at Sincar and more importantly for the logistics connections between Qandil in Iraq and Rojava in Syria. This was the first time since 1984 a senior PKK official was neutralized in their heartland of Qandil.

Twenty-five years after the assassination of Omer Haluk Sipahioglu in 1994 by a leftist Greek movement in Athens, Kose became the first Turkish diplomat to be attacked and killed while on duty. Between 1984 and July 17, 2019, the PKK had not killed any Turkish diplomat serving in northern Iraq.

In short, first Gharib Muhammed's killing and then the assassination of Kose as retaliation resemble the latest phase in the conflict.

After the killing of the Turkish official, the Kurdistan Regional Government's (KRG's) security agency, Asayish, quickly pursued the perpetrators and identified three of them. The main perpetrators — including Mazlum Dag, 27, registered as living in Diyarbakir — and two accomplices were apprehended in Makhmur on July 21.

Dag had received his residence permit in Erbil in 2014; he has been working in a restaurant and had a clean record and no official contacts with the PKK. In his first questioning, he admitted he has had close ties with the PKK since 2014. He said he had received 26 days of armed training in Makhmur and was groomed for this assassination.

It became clear that Dag was trained by the PKK and concealed in a sleeper cell. Now, Ankara and Erbil are trying to figure out where best to try him. While Ankara is preparing to ask for the extradition of Turkish citizen Dag, Erbil insists Dag should be tried in KRG territory. Meanwhile, Turkish officials are wondering how many more PKK-trained sleeper assassins with clean records are in the KRG area today.

Bahoz Erdal, a senior official in charge of the PKK’s special military missions and who ranks high on Ankara’s "most-wanted" list, denounced Turkey’s Operation Claw and lashed out at the support of the Barzani-led KRG for this operation. He warned that the MIT has intensified human intelligence-gathering efforts against high-level PKK officials in the Qandil region. According to Erdal, it was Kose who analyzed the field intelligence used in the killing of Gharib Muhammed and informed the Turkish army. He also said Kose was in charge of the intelligence team responsible for Turkey’s human intelligence operations in the Qandil region, where the PKK maintains its main headquarters.

Erdal emphasized that the assassin Dag and his team were not PKK members, and the PKK had not claimed credit for the operation; nevertheless, he congratulated them.

The PKK usually uses its offshoot organizations for such attacks instead of committing attacks under its own name so that it can deny any connections. One of these offshoot militant groups is the outlawed Kurdistan Freedom Falcon (TAK), which has perpetuated many deadly attacks against Turkish civilians in the past.

According to reports in Turkish newspapers, there are as-of-yet unclear diplomatic angles to Kose’s assassination.

Some historical information is needed to comprehend the diplomatic aspects of Kose’s assassination. The Hakurk region adjacent to Qandil — an area the PKK calls “resistance triangle,” where Turkey is conducting Operation Claw — is dominated by the Bradost tribe, traditionally rivals of the Barzani tribe.

The PKK advocates a strong relationship with the Bradost tribe, which naturally bothers the Barzani tribe.

There is another person who was apprehended by KRG forces on charges of aiding and abetting the assassination of the Turkish official, and this further complicates the diplomatic aspects. His name is Sitki Kerimhan Bradost, a notable of the Bradost tribe and one of Iraq’s most well-known, richest businessman, who is also known for his affinity with the United States and who has an American wife. Detention by the KRG of this most influential businessman, who had provided logistics support to US Army shipments from Iraq to Syria, on charges of abetting Dag in his assassination attack indicates the United States is somehow involved in the affair. According to Turkish media reports, Bradost's children and wife have taken refuge in the US Consulate in Erbil. US officials in Iraq are said to be trying very hard to secure his release.

Security sources in Ankara are sure that the killing of Gharib Muhammed and the detention of Kerimhan Bradost will disrupt logistics operations between Qandil and Rojava for a long time.

Ankara-Erbil joint actions are thus needed to undermine the influence of the PKK in Bradost and Hakurk, and to sever the logistics supply line the PKK set up between Qandil and Rojava with American support.

The PKK trains young people with clean records for assassinations and bombings and bases them as sleeper assassins in critical northern Iraq towns such as Erbil, Zakho, Dahuk and Sulaimaniyah. But when these sleeper assassins awaken to complete revenge missions in retaliation against Turkey’s targeted killings, the PKK won't have to claim responsibility for these attacks.

What is obvious is that unless the United States assumes the role of an influential mediator in northeast Syria and northern Iraq in the Ankara-Erbil-Qandil-Rojava rectangle, the tension is poised to further escalate.