Iraqi Kurdistan authorities are concerned about the potential political, economic and security impacts of the recent killing of a Turkish diplomat in Erbil. 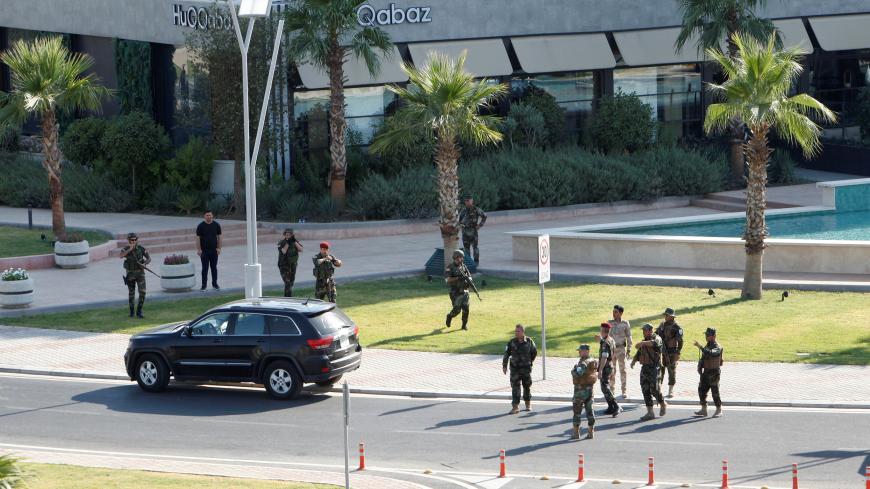 Kurdish security members gather near a restaurant where a Turkish diplomat was killed in Erbil, Iraq, July 17, 2019. - REUTERS/Azad Lashkari

SULAIMANIYAH, Iraq — The July 17 shooting in Erbil’s Huqqabaz restaurant, in which Turkish diplomat Osman Kose and two Kurdish citizens were killed, will haunt crisis-hit Iraqi Kurdistan for the coming years, despite the quick arrest of the alleged perpetrators.

Erbil, the capital of Iraqi Kurdistan, previously was described as the most stable part of Iraq, and accordingly becoming a hub for foreign diplomats as well as investors. This gun attack was the first major incident in Erbil since the 2005 suicide bombings, in which at least 60 Kurds were killed and 150 others were wounded. Now the city’s stability is again in question.

The "main perpetrator" in the July 17 attack, the Kurdistan Regional Government (KRG) said, is Mazlum Dag, a 27-year-old Kurdish man from Diyarbakir, Turkey. His arrest was announced July 20, along with Muhammad Biskiz, whom the Erbil Security Directorate and the Kurdistan Counterterrorism Unit (Kurdistan CT) described as Dag's aide in “the terrorist shooting attack.”

Dag is the brother of Dersim Dag, the Turkish pro-Kurdish Peoples' Democratic Party (HDP) deputy for Diyarbakir. HDP co-chairs Pervin Buldan and Sezai Temelli condemned the shooting in a statement, emphasizing their belief in peace and dialogue. They rejected any attempts to link the shooting to their party.

KRG spokesman Jutyar Adil told Al-Monitor, “We are waiting for the investigations to be concluded. When finished, we will announce the findings.” Authorities did not publish the surveillance footage of the attack. Al-Monitor contacted Tariq Nuri, head of the Erbil Security Directorate, for further comment, but he did not respond.

The other victims killed were identified as Nariman Othman Ali and Bashdar Ramadhan.

No group has claimed responsibility for the attack yet, but Ankara has accused the Kurdistan Workers Party (PKK) — which Turkey considers a terrorist group — of being behind the killing. Although the PKK had vowed to seek revenge for the recent assassinations of some of its senior leaders, it denied any involvement in this attack.

Mustafa Gurbuz, a non-resident fellow at the Arab Center Washington, told Al-Monitor, "This attack seems to be a response from PKK against Turkey's increasing military expansion and targeted assassinations in northern Iraq in the past two years. Of course, KRG leaders have been deeply disturbed to be in the crossfire and understand there is growing resentment among Iraqi Kurds, especially in Duhok [province], due to the never-ending Turkish operations.”

After such a high-level assassination, he said, the new KRG Cabinet of Prime Minister Masrour Barzani “will likely cooperate with Turkey, while asking Baghdad to raise its voice against Turkish military operations" on Iraqi Kurdistan soil. As Turkey seeks to reopen its consulate in Mosul, “Ankara would take Baghdad's demands more seriously," Gurbuz said.

Turkey, now in deteriorating relations with the United States over the S-400 missile purchase from Russia, may exploit Kose’s death, he added. Following the incident, the Turkish army increased its airstrikes on various Kurdistan locations, including an airstrike on Makhmur camp, wounding two civilians.

“In the near future, however, Turkey will pressure the Masrour Barzani cabinet to provide intelligence about PKK senior leaders, as well as to tolerate expanding military operations by Turkish Armed Forces. We should not forget that Masrour Barzani had long been the chief of Iraqi Kurdish intelligence, and Ankara may like to test him to see if there may be more cooperation under his premiership,” Gurbuz said.

“The incident isn't expected to have any negative effects on investments in the Kurdistan region, [particularly] in the oil sector, especially since the perpetrators of the attack were arrested quickly,” Nawzad Adham, director-general of trade at the KRG Trade Ministry, told Al-Monitor.

However, Bahroz Jafer, head of the Mediterranean Institute for Regional Studies in Sulaimaniyah, told Al-Monitor, “The incident’s negative impacts are that Turkey will rather [deal with] Baghdad regarding politics, the economy and security. This — with the help of the opponents of Kurds in Baghdad — would undermine the Kurdistan region’s [identity].”

Foreign and local journalists are now barred from entering the restaurant to cover the event on scene, which is contributing to suspicion about the KRG’s formal explanation of what really happened there. On July 17, the Kurdish CT forces severely assaulted Al Jazeera reporter Ahmed al-Zawiti as he tried to report from the scene, he later told police and the Committee to Protect Journalists. The Kurdish CT denies the accusation.

The Kurdistan region, which is struggling under the weight of foreign debts and high unemployment rates, is expected to pay a high cost for the Turkish diplomat’s killing.