A restaurant shooting that left a Turkish diplomat and an Iraqi civilian dead has regional leaders rushing to Erbil to manage the fallout. 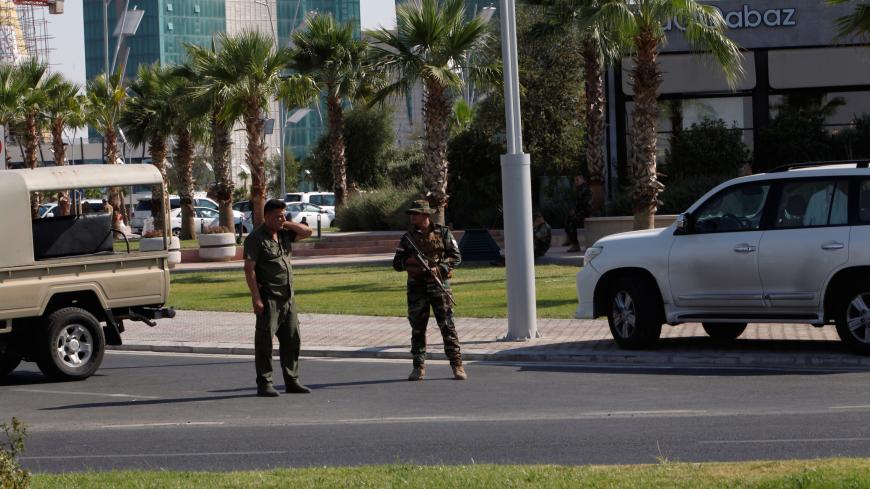 Kurdish security forces stand guard near a restaurant where a Turkish diplomat and another person were killed in Erbil, Iraq, July 17, 2019. - REUTERS/Azad Lashkari

A Turkish diplomat and an Iraqi civilian were killed today when armed assailants opened fire in an Erbil restaurant, the capital of Iraq’s Kurdistan Region, Turkish officials confirmed.

The diplomat, whose name and position have yet to be disclosed, was killed by two armed men who entered Huqqabaz, an eatery in Empire World. Many foreign companies have their offices and homes in the upscale complex owned by Kurdish Iraqi construction magnate Peshraw Majid Agha.

Turkish Foreign Minister Mevlut Cavusoglu confirmed the death of the Turkish diplomat, saying, “The attack was organized by three people. They attacked two Iraqis as well. We are in contact with Erbil and Baghdad.” He continued, “When such an attack occurs the first thing that comes to mind is a terrorist attack. The fact that two Iraqis sitting at the neighboring table were also killed — or rather attacked; one was killed, one is said to be critically injured — needs to be explained in order for us to provide detailed information. When it is we will share it with you.”

Turkish President Recep Tayyip Erdogan condemned the “heinous attack,” tweeting, “Our efforts are ongoing with the Iraqi and local authorities to track down the attackers.” He gave no further details.

There was no immediate claim of responsibility for the shooting. Erbil is counted among the safest cities in Iraq and the area where the killings occurred is among the most stringently monitored due to its proximity to Ainkawa, the mainly Christian neighborhood where the US Consulate is located.

The area leading to the Erbil airport was under lockdown as Iraqi Kurdish security forces conducted a manhunt, sealing the roads in and out of Erbil.

The Erbil Security Directorate noted in a statement that the government had launched a full investigation and assured citizens and foreign diplomats that “all necessary precautions will be taken to ensure the safety and security of the Kurdistan Region and its peoples.”

The pro-government Turkish daily Haberturk reported that the group of Turkish consulate officials was sitting at a table by the window when the shooting occurred. The assailants dressed in civilian garb reportedly used silencers and fled in a vehicle parked outside the restaurant. A sea of security cameras installed in and around the complex will have captured their movements, Haberturk speculated.

The pro-government Turkish media swiftly pointed the finger of blame at the outlawed Kurdistan Workers Party (PKK), the Kurdish militant group that is fighting the Turkish army in the mountainous region where the Turkish, Iraqi and Iranian borders converge. The group has come under escalating pressure in recent months as Turkish forces continue to pound it from the air with planes and armed drones. PKK commanders say the strikes could not happen without the collaboration of the Iraqi Kurdish authorities.

The PKK vowed revenge after one of its senior leaders, Diyar Gharib Mohammed, was killed along with two other fighters in a Turkish airstrike on June 27.

A PKK spokesman, however, denied his group’s involvement. Diyar Deniz said, “We have no information regarding the incident and only heard it through the media.”

Assassinating a Turkish diplomat would mark a first for the PKK, which has been fighting Turkish forces initially for Kurdish independence and now for autonomy since 1984. Its signature methods include kidnapping Turkish security personnel. It most recently hauled off two senior members of the Turkish national spy agency, MIT, in a sensational sting operation in Iraqi Kurdistan’s Sulaimaniyah province.

Targeting diplomats would clearly wreck relations with the Kurdistan Regional Government (KRG). Cooperation with its newly anointed prime minister, Masrour Barzani, is critical for the free flow of people and goods to landlocked northeastern Syria, where the PKK’s sister organization, the People’s Protection Units, holds sway.

Another possible culprit is the Islamic State, which has resumed its attacks in Iraq and issued fresh threats against Turkey. In a video released July 10, the jihadists taunted Erdogan. “Hey, Erdogan, arrogant tyrant of Turkey, do not consider the swords of the caliphate’s soldiers far from you,” said one in Turkish as fellow militants armed with machine guns stood at his side. The last time IS struck Turkey was a New Year’s attack in 2017 at an Istanbul night club that killed 39 revelers, many of them from the Middle East.

Bilal Wahab is a Nathan and Esther K. Wagner fellow at the Washington Institute for Near East Policy who closely follows Iraqi Kurdistan. He told Al-Monitor that the attack was bad news for the KRG as “it impacts Kurdistan’s safe and welcoming stature.” Wahab added, “The incident will also test KRG-Turkish relations.” Turkey is the primary outlet for Iraqi Kurdish crude, the KRG’s main source of revenue, which is shipped through a purpose-built pipeline and exported from the Ceyhan terminal on the Turkish Mediterranean coast.

Like many other observers, Wahab said the possibility that the murder was to settle business or romantic scores could not be discounted. The Kurdish Iraqi victim was reportedly the nephew of Azad Jundiani, a former political bureau member of the Patriotic Union of Kurdistan, the second largest political grouping in the KRG. Neither of the victims’ gender or name has been formally disclosed.