As Turkey buries its diplomat shot in Erbil, little information is emerging about the man Ankara's mourning as a martyr. 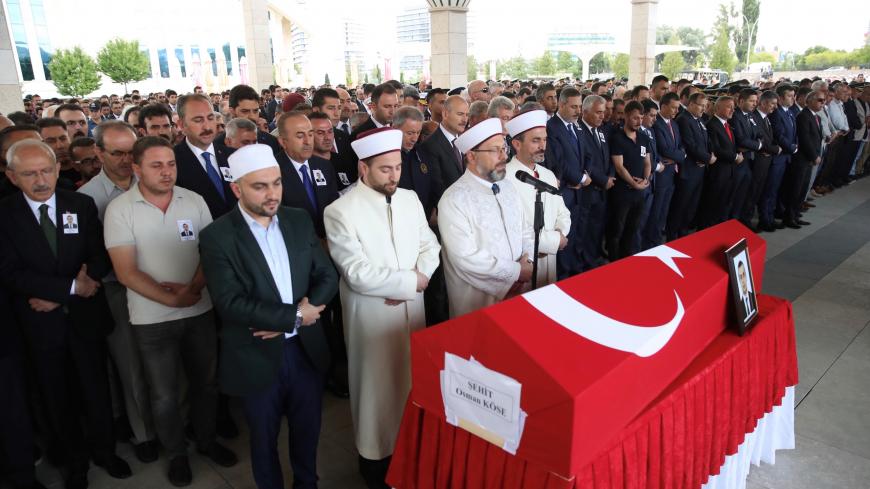 A Turkish diplomat slain in Erbil, the capital of Iraq’s Kurdistan Region, was given an official funeral in Ankara today as Iraqi Kurdish authorities kept up their manhunt for the unidentified perpetrators for a second day. The diplomat, Osman Kose, was on a six-month assignment at the Turkish Consulate in Erbil, Turkey’s A Haber news channel reported.

Iraqi President Barham Salih called Turkish President Recep Tayyip Erdogan to extend his condolences over the murder, which has sent shockwaves through the Iraqi Kurdish establishment.

The motives behind Wednesday’s shooting in the Huqqabaz restaurant remain unknown. Two locals identified as Neriman Osman and Beshdar Ramazan also perished in the attack.

A senior KRG official told Al-Monitor, “We are now treating yesterday’s incident as an assassination. Preliminary information shows that the killing of the Turkish diplomat was carefully planned and premeditated.” The official, who spoke on strict condition of anonymity, continued, “The investigation is still ongoing, but more information will be made public when possible.” He said authorities were examining video footage from security cameras at the restaurant in Empire World, a posh office and residential complex on the way to the airport. He gave no further details, citing the “extreme sensitivity” of the case.

A Haber reported that Turkish security officials had inspected the scene of the shooting, which remains off limits to the press and public.

Turkish officials have not commented on the affair since yesterday. Erdogan condemned the attack and his spokesman Ibrahim Kalin vowed that Turkey would “respond appropriately.” Unusually, Ankara has yet to blame its top enemy, the outlawed Kurdistan Workers Party (PKK), which has been waging a bloody armed campaign against the Turkish military since 1984 and whose top leaders are based in Iraqi Kurdistan. So far the Turkish government has not offered any hints on who it believes might be responsible.

The shroud of mystery may be related to Kose’s role at the Turkish mission. A well-informed source whose information on such matters has proved accurate in the past claimed to Al-Monitor that Kose was a member of Turkey’s national spy agency, MIT, and served on its Iran desk. The source, who declined to be identified by name, said that Kose had been sitting at the restaurant with “business associates” who did not work at the consulate. But the source also aired skepticism that the murder was politically motivated, saying, “It was committed in full view of multiple security cameras. How stupid is that?” The source’s claims could not be independently verified.

It's common knowledge that Turkey runs a deeply entrenched intelligence network in Iraqi Kurdistan, mainly to keep a close eye on the PKK and its affiliates. Two senior MIT operatives who were allegedly plotting to murder PKK leader Cemil Bayik were kidnapped by the PKK in August 2017 and have remained in the militant’s custody ever since.

Tellingly, no description of Kose’s job or rank at the Ministry of Foreign Affairs nor of any other foreign postings he held have been shared. Contrary to some media reports, Kose was not the deputy consul general. He held a “secretary” rank, Iraqi Kurdish officials told Al-Monitor.

Rudaw, an Iraqi Kurdish media outlet provided a detailed description of yesterday’s events apparently based on video footage seen by reporter Senger Abdurrahman. He said the three assailants had pulled up near the restaurant in a Toyota vehicle at 11:30 a.m., surveilled the environs and then left. They returned a half hour later and entered the restaurant. They sat at two tables near Kose and “ordered water, tea and coffee just like everyone else.” When Kose rose to go to the cashier, ostensibly to settle the bill, one of the men rose and shot him in the head with a gun fitted with a silencer. Kose died on the spot. Panicked customers threw themselves to the ground. The two other victims rose to either flee or to intervene and were shot at by the other assailants. One of the assailants was then fired upon by “the Turkish diplomat’s friend.” All three fled together with two other men who awaited them outside, Abdurrahman said. His report did not identify the diplomat’s friend.

The license plate of the car they fled in, Abdurrahman added, proved to be fake.