The Turkish president’s absence from the regional summit in Baghdad underscores the urgent need for Turkey to mend fences with Iraq and rethink the cost of its confrontational policies in the region. 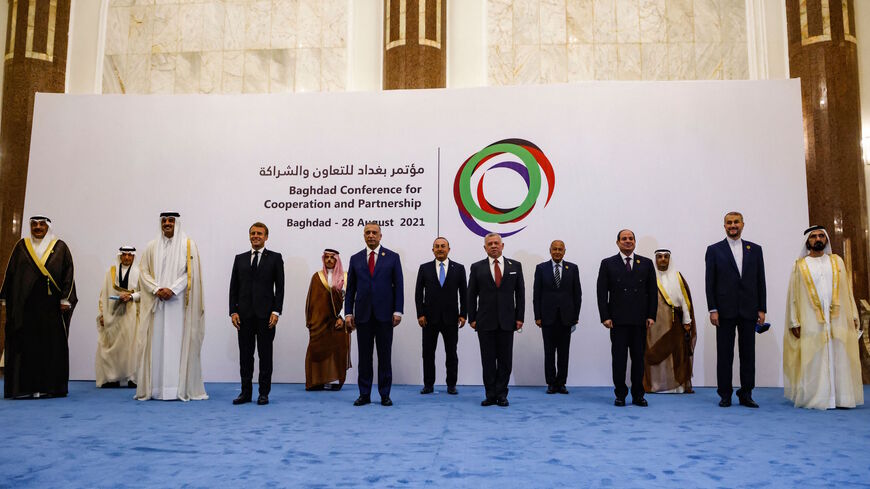 Turkish President Recep Tayyip Erdogan might have stood out as the most influential participant in the regional conference in Baghdad last week, but his confrontational foreign policies kept him away from the gathering.

Foreign Minister Mevlut Cavusoglu represented Turkey at the Aug. 28 Baghdad Conference for Cooperation and Partnership, which brought together Iraq’s neighbors, other regional countries and France. Among Iraq’s other four neighbors, Iran and Saudi Arabia sent their foreign ministers as well, while Jordan was represented by its king and Kuwait by its prime minister. The emir of Qatar, the prime minister of the United Arab Emirates and the president of Egypt were other high-profile attendees, while French President Emmanuel Macron stood out as an external actor. He also paid visits to Mosul and Iraqi Kurdistan, two regions critical for Turkish interests.

That Erdogan shunned the conference speaks of how Turkey’s confrontational foreign policy has come to constrain it, even as it has recently moved to mend fences with Egypt, Saudi Arabia and the UAE.

The conference came as part of Iraqi Prime Minister Mustafa al-Kadhimi’s efforts to extricate his country from being the front line of rivalry and wrangling between various powers. His road map involves efforts to end US-Iranian score-settling via Iraq, but also an offer for good neighborly relations with Turkey, whose military operations on Iraqi territory have significantly expanded as part of a stepped-up crackdown on the outlawed Kurdistan Workers Party (PKK). Kadhimi’s government knows it must diversify its regional ties to rid itself of the constraints that have emboldened Iran and Turkey to believe that Iraq is largely dependent on them. Standing out in Baghdad’s efforts is a quest to revive bonds with the Arab world, including a trilateral cooperation platform with Egypt and Jordan that is likely to advance not only Iraq’s regional integration but also its economic alternatives, including an energy corridor from Basra to the Jordanian port of Aqaba.

It may look like an Iraqi bid to counterbalance Iran and Turkey with Arab partners, but Turkey still has the chance to benefit from regional normalization, provided that it reviews its ill-advised policies on Iraq that have fueled Arab apprehension of a modern-day Ottoman-Persian rivalry in the region.

Still, the priorities and cooperation fields that Cavusoglu highlighted at the conference come across as a sign of Ankara’s intent to maintain its interventionist posture. His main proposals — to build a motorway and a railroad from Fish Khabur, the border crossing linking Iraq and northeast Syria, to Baghdad and an industrial zone in Mosul — are both underlain by political motives that outweigh economic considerations.

Fish Khabur lies a stone’s throw from the Turkish border village of Ovakoy, the site of a longstanding Turkish plan for a second border crossing with Iraq. The proposed road from the area to Baghdad, via Tell Afar and Mosul, has several motivations: to bypass Iraqi Kurdistan, to which Turkey’s sole border crossing with Iraq opens, create a de facto security belt impeding the movement of PKK militants between their hideouts in northern Iraq and Kurdish-held northeast Syria and facilitate access to Mosul, which neo-Ottomans still mourn as a lost land. Similarly, Ankara’s dreams have long involved the construction of an industrial zone or an airport in Mosul.

Yet, Turkey’s record in Iraq poses political stumbling blocks to economic projects, not least because of its recent airstrikes in the Yazidi region of Sinjar, which is part of Mosul province. Ankara worked with ill-chosen actors prior to the Islamic State’s seizure of Mosul in 2014. Then, amid the advance of IS, Turkish officials suggested that the group had sprung up due to justified Sunni anger with discrimination, and did not evacuate the Turkish consulate in Mosul in what was seen as a sign that Ankara trusted IS, only to see its consulate staff taken hostage. During the campaign to liberate Mosul, Turkey refused to withdraw its soldiers from the nearby Bashiqa base despite Baghdad’s objections, vehemently opposed the participation of Shiite fighters in the offensive and helped the formation of a Sunni militia, arguing that Mosul was a Sunni city. Coalition warplanes destroyed the consulate building in a 2016 raid against IS militants occupying the compound. The mission was reopened in a new building in May after long foot-dragging by Baghdad.

And while Erdogan has yet to go to Mosul, Macron visited the city Aug. 29 and announced that France would soon open a consulate there. Macron’s pledges to support the reconstruction of Mosul and the French private sector’s interest in investment in the area have certainly irritated Ankara.

Mosul has also been the scene of a brewing influence war between Turkey and Iran. Though the Turkmen minority in the region is seen as a natural ally of Ankara, its Shiite segments have increasingly come under Iranian influence in recent years. Iran’s influence in the Mosul-Kirkuk area has also grown through its allies in Iraq’s Popular Mobilization Units.

If Iraq manages to enhance its relations with its neighbors, drawing on economic partnerships, the rifts that fuel such influence wars might heal as well.

Separately, Macron pledged that France would maintain a military presence in Iraq against terrorism even if the United States withdraws and continue to support Iraqi Kurdistan. A growing French role in the region, encouraged by the United States, will certainly raise eyebrows in Ankara, especially if France claims a role as a protector of the Kurds. After all, Ankara was bragging about rivaling France in Africa, but is now facing a French move to fill the American vacuum in the Kurdish region next door.

Macron said he and Kadhimi had discussed the need for an end of Turkish airstrikes and stressed that the Yazidis and all other refugees should be able to return home.

A senior commander of a PKK-linked Yazidi force and nine other people were killed in Turkey’s air raids in Sinjar in mid-August, in which a drone targeted a vehicle carrying the commander, while F-16 jets hit a medical facility.

In its talks with the PKK that collapsed in 2015, Ankara had demanded that armed PKK elements withdraw beyond Turkish borders — that is, to their longstanding bases in the mountains of Iraqi Kurdistan. In the past two years, however, the Turkish army’s operations and outposts in the region have expanded. Still, Ankara rejects accusations that it is violating Iraq’s sovereignty.

The investment projects that Iraq desperately needs might eventually help Iraq to become a bridge in rebalancing regional relations. Kadhimi’s mediation between Iran and Saudi Arabia shows that Iraqi diplomacy is not dead after all. Baghdad might be capable of a similar role in facilitating Ankara’s ties with Riyadh, Cairo and Damascus. But before looking for mediation, a review of its regional policies appears to be a must for Ankara.

Nevertheless, Turkey retains its potential to do business with Iraq despite all the downsides in bilateral ties. Only days after Iraqi protests over the Turkish strikes in Sinjar, the Iraqi defense minister said that Baghdad had asked Ankara for offers to buy military hardware, including Bayraktar TB2 drones and T129 attack helicopters.

Furthermore, Turkey retains leverage to impose conditions through its military presence in Iraq and Syria. The Kurds may place trust in France’s friendship, but France could hardly change the existing equilibriums or counterweight Turkey on its own without the United States. After all, even the US backing of the Kurds has failed to be a major barrier for Turkey.

Notably, Macron gave up plans to go to Sinjar to meet with Yazidi representatives upon the advice of Iraqi officials, who remained wary of Turkey after the killing of the Yazidi commander, who was reportedly on his way to a meeting with Kadhimi when the Turkish drone struck, Iraqi Kurdish sources told Al-Monitor.

It could be seen as a sign of Turkey’s deterrent impact, but its ability to deter does not mean that it is on the winning side. Turkey’s security-centered approach in its ties with Iraq blunts the potential for political and economic partnerships between the two neighbors.