Ankara backs some Turkmens in Iraqi politics, shuns others

By ostracizing Turkmen politicians who supported the 2017 independence referendum in Iraqi Kurdistan, Turkey could be shooting itself in the foot. 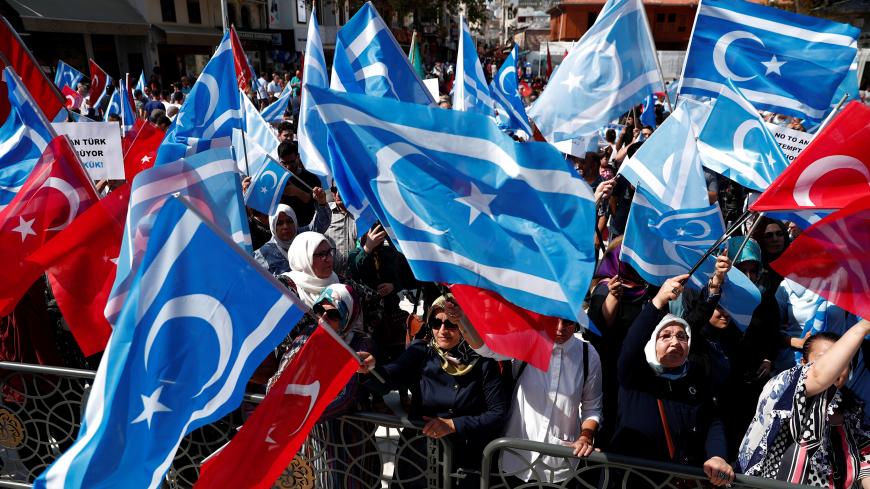 Demonstrators wave Turkish and Iraqi Turkmen flags during a protest against the independence referendum in northern Iraq, in Istanbul, Turkey, Sept. 17, 2017. - REUTERS/Murad Sezer

While trying to place its Turkmen kin back at the center of its influence on politics in Iraq, Turkey is falling into the trap of discriminating between Turkmens who align with its policies and those who beg to differ. Foreign Minister Mevlut Cavusoglu’s recent trip to Iraq has exposed Ankara’s drift away from its claim of embracing all Turkmen groups.

In his April 28 talks with Iraqi officials in Baghdad, Cavusoglu pressed for Turkmen participation in government bodies — a welcome move for the Turkmens, who have come to feel forgotten in recent years. The optimistic sentiment, however, dissipated the following day as Cavusoglu traveled to Erbil, the capital of the Kurdistan Regional Government (KRG). Four of the five Turkmen members of the Kurdistan parliament were kept from participating in the welcoming protocol for Cavusoglu and his meeting with the Iraqi Turkmen Front (ITF), the main Turkmen party in Iraq.

Some Turkmens say they have even been kept from entering Turkey.

Standing out among them is Muna Qahwachi from the Turkmen Reform Party, who, in February, was elected second deputy speaker of the Kurdistan parliament. On May 23, Qahwachi said she had been barred from traveling to Turkey for backing Kurdistan’s independence referendum in 2017 and criticizing Turkey’s military intervention in Syria’s Afrin the following year.

Al-Monitor has learned that Turkey has denied a number of other Turkmen politicians visas, including Abdulkadir Bazergan, leader of the Turkmen Reform Party, and Muhammet Ilhanli, head of the Turkmen Development Party and a member of the Kurdistan parliament.

Qahwachi believes the problem stems more from the ITF misleading Turkish officials, and the attitude of Turkey’s consulate in Erbil, than from the Turkish government’s overall attitude.

In an interview with Al-Monitor, Qahwachi explained she was denied a visa a year ago for a planned family trip to Turkey. “My maid got a visa, but I did not. I thought it was some mistake and called the consulate three times, but got no response,” she said. In a subsequent encounter with Consul General Hakan Karacay, Qahwachi asked why she had been denied a visa. “He responded that I had backed the referendum and that he was aware of my writings and work,” she said.

Qahwachi said she chose not to publicize the visa incident at the time and believed Cavusoglu was not even aware of it. As to why some Turkmens, including herself, were excluded from Cavusoglu’s program in Erbil, Qahwachi charged that the ITC, which is close to Ankara, was “slinging mud” at other Turkmen groups, recalling that former Foreign Minister Ahmet Davutoglu had met with them in Erbil several years ago. “It would have been an honor for us to greet Cavusoglu,” she said.

“I don’t think Turkey has a problem with me,” Qahwachi added. “To test this out, I applied for a visa online a month later and I got a six-month visa. They would not have issued me one if Ankara had a problem with me.”

Asked why she decided to make the visa incident public now, Qahwachi replied, “I’m not the only one. Others have been denied visas as well. Abdulkadir Bazergan, for instance, applied for a visa three months ago. He submitted his papers under VIP procedures, but was eventually denied a visa. Eight months ago, Muhammet Ilhanli traveled to Ankara, and at the airport he was told his visa had been canceled and he was then deported to Baghdad. Others were issued visas on their second applications after being rejected the first time. An overwhelming majority backed the referendum, but only we, the Turkmens, are being made to pay the price.” Despite the referendum's decisive passage, Baghdad quickly sent forces to Kurdistan to squelch the movement and Iraq's Supreme Court declared the vote unconstitutional.

Other Turkmen sources told Al-Monitor that Qahwachi’s political alignment with the Kurdistan Democratic Party (KDP), her membership on the referendum council and her alleged description of Turkey as an “invader” in Afrin had caused problems.

Qahwachi categorically denied calling Turkey an invader. “I said that Turkey has a right to protect its borders, but should do it without harming civilians," she said. "I sent the interview for the consulate to see. Moreover, after those remarks of mine, the Kurdish media waged a campaign against me, saying I have begun to act as a Turk opposing the Kurds.”

Nevertheless, the notion of an embargo outside Ankara’s knowledge appears unlikely, as the comments of official Turkish sources reflect a perspective supportive of sanctions against the likes of Qahwachi. According to a source who requested anonymity, Ankara’s approach rests on the following arguments:

Qahwachi disagrees with Ankara’s thinking. “I cannot accept that we don’t pursue Turkmen politics,” she said, stressing that Turkmens’ failure to unite is the main problem. Recounting her experience, she said, “I’ve been in politics for the Turkmen cause since 1995. We used to be under the ITF roof. After the ITF headquarters moved from Erbil to Kirkuk in 2003, regionalism began. And we said, ‘If [the Turkmens] of Kirkuk do not want us, then we’ll set up our own party.’ We also said we remain open to proposals to reunite under a common roof.”

According to Qahwachi, creating the new party didn't cause problems with Ankara. “We are paying the price of supporting the referendum only,” she said. “We said ‘yes’ to the referendum to guarantee the rights of our people and we don’t regret it.”

Qahwachi sees no reason to wrangle with the Kurds. Asked why Turkmen deputies in Erbil are close to the KDP, she said, “Because [the KDP] respects the rights of the Turkmens. The Turkmens in Kurdistan have always sought to live as brothers with the Kurds. We are on good terms with all parties.” Referring to the KDP leader and former KRG president, she said, “I see Massoud Barzani as a leader. No one has defended Turkmen rights as much as he has. When the constitution was being written in Baghdad, he was the one to defend our rights.”

As for her post in the parliament’s leadership, she added, “We now have a high-level office and, in the next stage, we have to take a share in the government. This is what we are now struggling for.”

The historical, political and sociological differences between the Turkmens of Erbil and Kirkuk mark the fault lines of Ankara’s Turkmen policy today. The long-standing power struggle between Arabs, Kurds and Turkmens in oil-rich Kirkuk has led to a more nationalistic sense of identity among the Turkmens there. Coupled with Turkey’s interest in the region, this creates a sort of a “proxy” relationship. Hence, the ITF is largely perceived as an extension of Turkey. The Turkmens of Erbil, on the other hand, are more blended with the Kurds. They comfortably speak Kurdish, unlike their kinsmen in Kirkuk.

According to Kurdish sources, Massoud Barzani sought close ties with the Turkmens as part of his political calculus regarding Turkey. Denying Turkmens' rights risked giving Ankara an opening to meddle, hence the Turkmens were given five seats from the 11-seat minority quota in Erbil's 111-member regional parliament. This was Barzani’s way of acknowledging Turkmen rights to pave the way for good relations with Turkey.

As a result, the Turkmen community today has two diverging perspectives: Those in Erbil value Kurdistan’s recognition of Turkmen rights, which remain ignored on federal level, while those in Kirkuk see Kurdistan as a threat and demand a special status for their region.

Another conundrum for Turkey stems from the Sunni-Shite divide in the Turkmen community. Shiite Arab parties have expanded their clout among Turkmens in recent years. The Shiite-dominated Popular Mobilization Units, joined by Turkmens during the fight against the Islamic State, is now present in Kirkuk and influencing local politics. Similarly, Iran's Quds Force has gained a foothold in Kirkuk.

For Turkey, the fracture of its Turkmen influence domain under the impact of political shifts is a source of concern. Still, some in diplomatic quarters warn that reacting grumpily to the division and engaging only with the ITF could lead to further setbacks down the road.