Given its close ties with the Kurdistan Regional Government, which it needs for economic, political and security interests, Turkey’s objections to Iraqi Kurdish plans remain low key, but a crisis between the sides may nevertheless be looming. 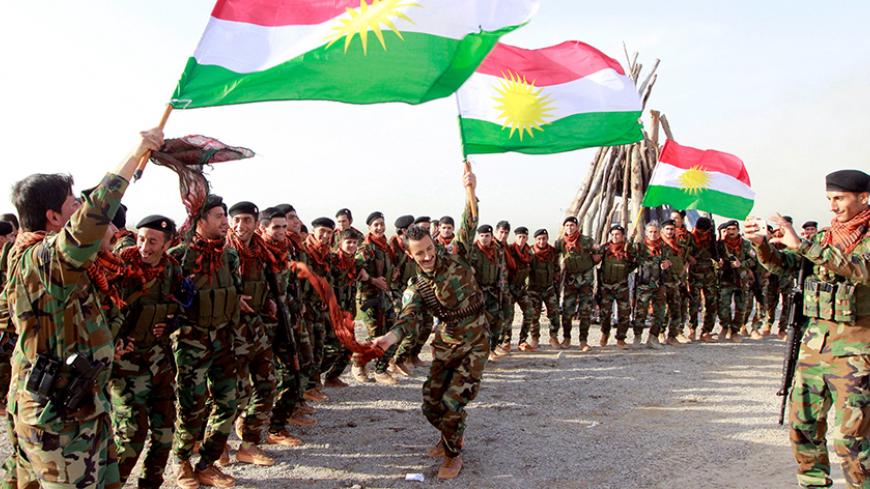 Attempts by the Kurdistan Regional Government (KRG) in Iraq to expand its territory, while inching its way toward independence, may augur more difficulties for Turkey in a region where it already faces multiple problems.

Amicable ties with the KRG — one of the few friends Turkey has left in the region — remain important for Ankara and ensure measured Turkish responses to such moves by Erbil, the capital of Iraqi Kurdistan.

Given the antipathy Turkish nationalists have for all things Kurdish, however, the situation could spin out of control with unexpected developments on the ground, leaving Ankara with yet another hostile neighbor on its borders.

The first signs of potential crisis between Ankara and Erbil came when the Kurdish-dominated provincial council in the oil-rich city of Kirkuk decided, as part of this year’s Nowruz celebrations, to raise the Kurdish flag alongside the Iraqi flag over the city’s historic citadel and other official institutions.

This alarmed Turkey, where nationalist sensitivities prevail when it comes to Kirkuk, which is widely believed to be a historic Turkmen city even if its demography was altered by the Kurds after the US invasion of Iraq in 2003.

Turkish nationalist lore also says Kirkuk was unfairly pried away from Turkey after World War I by the great powers. The feeling that it belongs by right to Turkey continues to be pervasive.

The Turkmen members of the provincial council boycotted the vote on raising the Kurdish flag while Arab members, barring one, voted against it.

Turkish nationalists were already agitated by the visit of KRG President Massoud Barzani to Istanbul on Feb. 26 for talks with President Recep Tayyip Erdogan when the Kurdish flag was raised at Istanbul's airport on Barzani's arrival.

In its statement regarding the Kurdish flag in Kirkuk, the Turkish Foreign Ministry expressed “concern” over this “incorrect” development.

“We consider this decision … as a unilateral act that directly concerns the disputed status of Kirkuk and that contradicts the Iraqi Constitution,” the statement said, warning that it could jeopardize “efforts to ensure lasting security and stability in Iraq,” and calling for “common sense, responsibility and restraint” to prevail.

The idea of an independent Kurdistan remains a red line for Turkey, which fears it will prompt its own restive Kurds to seek secession.

Ankara’s dilemma, however, is that it relies on its good ties with the KRG for economic reasons, which includes cooperation in the energy field, as well as political and security reasons.

Barzani remains a potential bulwark for Turkey against the spread of the outlawed Kurdistan Workers Party (PKK) in northern Iraq — especially in the Sinjar region. He is also a Sunni ally against the Shiite-dominated administration in Baghdad, with which Ankara has serious differences, especially over Mosul.

Ankara is not alone, though, in sounding a warning over Kirkuk. The central government in Iraq has also said that the KRG does not have the authority to raise the Kurdish flag there, while the Iraqi parliament voted to repeal the Kirkuk provincial council’s decision.

Turkish Prime Minister Binali Yildirim held a phone conversation with his Iraqi counterpart, Haider al-Abadi, to discuss the issue — despite the chill in ties between Ankara and Baghdad. Yildirim later told CNN Turk that Ankara and Baghdad were in agreement on this issue.

The United Nations and Iran have also weighed in to oppose the Kurdish flag in Kirkuk. Kurdish officials, however, remain unperturbed. “It is impossible for Kurdistan’s flag to be lowered again,” said Rebwar Talabani, the acting head of the provincial council.

Turkish feathers were ruffled even further when KRG officials made it known in the presence of UN Secretary-General Antonio Gutteres — immediately after the raising of the flag in Kirkuk — that they would hold a referendum on independence in the near future.

Hemin Hawrami of the Iraqi Kurdish presidency told reporters that Gutteres had been informed during his recent visit to Erbil of their intention to hold this referendum “at the earliest possible time.”

The situation was further aggravated when the Kirkuk provincial council voted earlier this week to hold a referendum on the annexation of the city by the KRG.

Using relatively mild language, Erdogan’s spokesman, Ibrahim Kalin, told reporters in Ankara that these were “wrong steps” at a time when Iraq was passing through a fragile period.

KRG spokesman Safin Dizayi, who is also a senior figure in Barzani’s Kurdistan Democratic Party (KDP), insisted, however, that Kurds would seek independence, but said they wanted this to be a “friendly separation.”

Dizayi — who is a well-known figure in Ankara, where he served as KDP representative — told the daily Hurriyet that their efforts for a democratic and federal Iraq had been snubbed by Shiite-dominated governments in Baghdad, which, he said, also failed to honor their pledges to the Iraqi Kurds.

“Our only option is independence for Iraqi Kurdistan under these conditions,” Dizayi said, stressing that they wanted to achieve it through friendly negotiations with Baghdad.

Cagri Erhan, who lectures in international affairs at Istanbul’s Kemerburgaz University, says that maintaining Iraq’s territorial integrity has vital priority for Turkey because it will ensure regional stability and prevent the spread of terrorism.

Erhan also insists that “the right to self-determination does not mean that any community can declare independence when it likes.” He argues that under prevailing circumstances holding an independence referendum will be difficult for the KRG. Erhan also maintains that these latest steps by the Iraqi Kurds have more to do with their own domestic political squabbles than anything else.

Ilnur Cevik, Erdogan’s adviser on international affairs, also believes that Barzani is playing to a domestic gallery. He says the ruling KDP faces great opposition from other Kurdish parties in northern Iraq, such as the Patriotic Union of Kurdistan (PUK), led by Jalal Talabani, and the Gorran movement.

“To show that they are a step ahead of Barzani, Talabani’s men first got the provincial council to vote to raise the flag in Kirkuk, and then ruled on the annexation of the city to the Kurdish region,” said Cevik, who has had extensive business dealings with the KRG.

“Barzani for his part suggested an independence referendum to show the Kurdish public that he is one step ahead,” Cevik added.

Hurriyet Daily News commentator Verda Ozer, on the other hand, sees an Iranian hand in the decision of the provincial council in Kirkuk, which she says is dominated by the PUK. “Iran is certainly rubbing its hands … following this decision since it comes after enhancing its influence in Kirkuk via [the] PUK. Along the same lines, the governor of Kirkuk and the PUK are also in pursuit of approaching Iran,” Ozer said.

This, however, is at odds with an official statement from Iran indicating its opposition to raising the Kurdish flag in Kirkuk.

Developments also belie the view that the call for an independence referendum is the result of rivalry between the main Kurdish groups. KDP and PUK officials appeared to have put this rivalry aside over the weekend when they met in Erbil to determine a timetable for the referendum. They also reflected a common position regarding Kirkuk.

Given existing difficulties, Iraqi Kurdish plans for independence may remain wishful thinking for the foreseeable future, even if a referendum is held for symbolic reasons, or to strengthen Erbil’s hand against Baghdad.

But the task of putting Iraq together again remains a daunting one, with no assurance of success. Circumstances could therefore leave Turkey facing another regional fait accompli in the end.

In a late development April 4, Erdogan called for the Kurdish flag raised in Kirkuk to be “pulled down immediately,” saying that “Kirkuk, with its Turkmens, Arabs and Kurds, belongs to everyone.”

Addressing the Iraqi Kurds without naming them, he warned them that claiming Kirkuk the way they were doing would come at a high cost.

Erdogan was speaking at a rally in the Black Sea city of Zonguldak where he was canvassing for the upcoming constitutional referendum, which he hopes will make him Turkey’s executive president.

Given Erdogan’s close ties to Barzani, many considered his remarks to be aimed essentially at the nationalist audience at home that he is relying on for a strong return from the April 16 referendum that would give the Turkish presidency greater powers.

Nevertheless, his remarks demonstrated the potential volatility of the situation.