Raising the Kurdistan flag atop the governmental buildings in Kirkuk sparked tension in the province and in Baghdad. 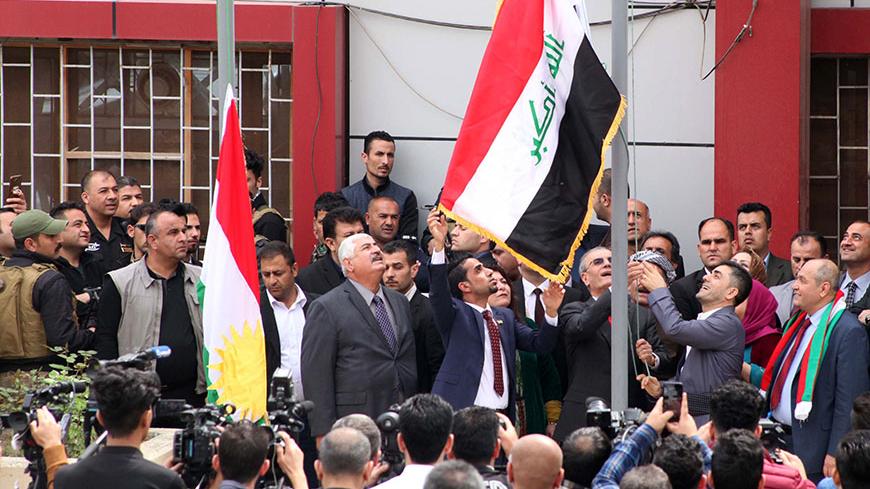 Najmiddin Karim, the Kirkuk provincial governor (C-R), raises the Iraqi flag to fly next to the Kurdish flag over a government building in Kirkuk, Iraq, March 28, 2017. - MARWAN IBRAHIM/AFP/Getty Images

BAGHDAD — Controversy ensued when the flag of the Kurdistan Regional Government (KRG) was raised in Kirkuk on March 28. The local government in the province insisted on having the Kurdish flag fly alongside the Iraqi federal one, although the federal government in Baghdad disapproved of this decision.

The local government in Kirkuk province, in northern Iraq, voted on raising the KRG flag alongside the Iraqi federal one atop state institution buildings in the province. The voting session, held on March 28, was boycotted by 16 Arab and Turkmen members; only the 25 Kurdish members attended.

Less than 24 hours later, demonstrators took to the streets in Erbil, the KRG capital, to protest the decision. However, no one expected such demonstrations to occur in Erbil, which is controlled by the Kurdistan Democratic Party (KDP) led by Massoud Barzani, one of the most prominent supporters of Kurdish dominance in Kirkuk.

In a session held April 1, the Iraqi parliament rejected the Kirkuk council decision and voted in favor of displaying only the Iraqi flag on public buildings in Kirkuk. Kurdish members left the parliament before the vote took place.

On the other hand, the KRG presidency supported raising the Kurdish flag over state buildings in Kirkuk, saying, “Raising the KRG flag atop Kirkuk’s buildings and facilities is both natural and legal, just as raising the Iraqi flag is.”

An official position was also expressed by Iraqi Prime Minister Haider al-Abadi, whose spokesman Saad al-Hadithi said that raising the KRG flag in Kirkuk, which is not part of the KRG, is a violation of the Iraqi Constitution and the law governing provinces outside of the KRG.

Hadithi said in a press statement on March 28, “Kirkuk was not within the areas under the KRG government’s control on April 19, 2003. This is why it follows the federal government instead and it is still receiving the salaries of its employees from the government. So it cannot take such a decision [to raise the Kurdish flag] without first consulting the federal government.”

Meanwhile, member of the KRG parliament Salar Mahmoud supported raising the flag and did not believe such a move violated the constitution because none of its articles stipulate that the KRG flag should not be raised in other provinces. He told al-Sumaria news agency that terrorism in Kirkuk was defeated under the KRG flag.

Both supporting and opposing points of view keep mentioning the constitution, although the Iraqi Constitution includes no mention of this issue and does not specify whether or not the KRG flag is allowed to be raised along with the Iraqi flag. This may imply that this issue can only be resolved by a political consensus over whether to keep the flag or take it down.

“The Iraqi Constitution does not include a text preventing Kirkuk from raising the KRG flag. Raising the flag will deepen the brotherly bond between the province’s components,” Karim noted.

It was somewhat unexpected for Kirkuk to take such a decision, particularly since Karim, who holds the highest executive authority there, is a leader in the Patriotic Union of Kurdistan, led by Jalal Talabani, who has close ties with Iran and is known to be on good terms with the federal government’s policies.

On March 22, the United Nations expressed “concerns” about raising the KRG flag in Kirkuk and warned against taking steps that threaten the peaceful coexistence in the province. The UN mission in Iraq noted in a press statement, “The Iraqi government has made it clear that according to the constitution, Kirkuk falls under the central government’s jurisdiction, and only the Iraqi flag should be raised in the province.”

For its part, Turkey opposed raising a flag other than the Iraqi one in Kirkuk. Hussein Mufti Oglu, the spokesman for the Turkish Foreign Ministry, said in a press statement on March 20, “We were shocked by the official letter issued by the Kirkuk province, in which the provincial council called on raising the KRG flag next the Iraqi one over official buildings in the city.”

He added, “Any unilateral decision regarding the future of Kirkuk affects the security and stability of Iraq and such an attempt also affects the social and economic aspects.”

Iraqi Vice President Osama al-Nujaifi described raising the Kurdish flag next to the Iraqi flag as a violation of national unity and the spirit of cooperation and understanding between the components of the province. He noted in a statement, “It is unacceptable to impose the will of one component or one party over everyone else.”

For Kirkuk to pose such an issue at this time may be a prelude to a bigger issue, that of determining the fate of this city. The Arab-Kurdish, Kurdish-Turkmen and Arab-Turkmen power struggle there is anxiously waiting for such issues to erupt and ultimately force conflicting parties to show their cards to the public.

In a nutshell, the federal government in Baghdad can, along with the Iraqi parliament, summon the governor of Kirkuk and question him about the purpose of raising the Kurdish flag next to the Iraqi one, and since Karim works under the central government, Baghdad is expected to have a say in taking the flag down.