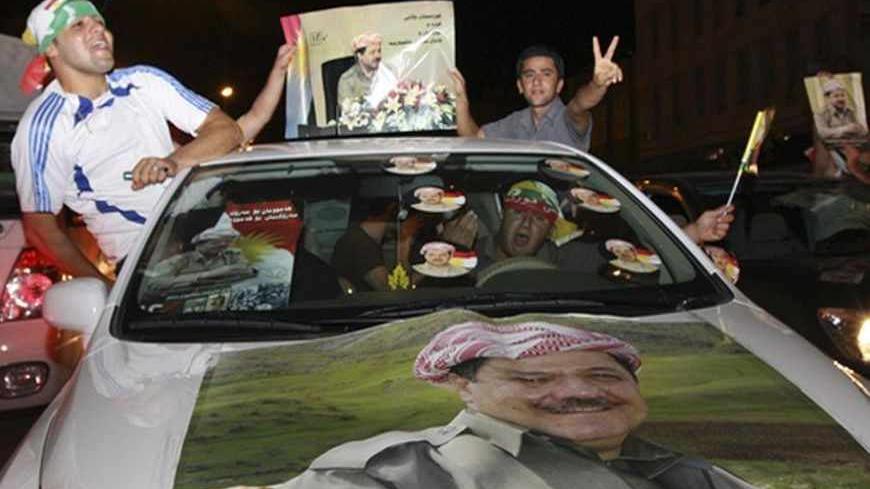 As soon as Iraq’s election commission announced that the election campaign for the Kurdistan region of Iraq’s parliament would start on Aug. 28, the region’s cities of Erbil, Sulaimaniyah and Dahuk wore  different and colorful suits.

The cities’ streets were covered in elegant and creative campaign banners and posters. In Sulaimaniyah, the dominant colors were green and blue. Green symbolizes the Patriotic Union of Kurdistan (PUK), led by Iraqi President Jalal Talabani, and blue represents the Movement for Change (MC), led by Nawshirwan Mustafa. In the region’s capital Erbil, the yellow color of the Kurdistan Democratic Party (KDP), which is led by Iraqi Kurdistan's President Massoud Barzani, was predominant.

The current elections and campaigns are different from those that took place since 2003. Instead of reciprocal threats and clashes, the two parties’ supporters were singing in the streets, dancing the famous Kurdish dabke dance and decorating their cars and homes with their parties’ flags.

The elections will take place on Sept. 21, with 1,129 candidates participating, representing 30 political entities and competing for 100 parliamentary seats. Figures representing the Christian, Turkmen and Armenian minorities in the region are competing for 11 additional seats.

The competitive races will mainly be among three forces: the PUK, the MC — the battle between those two will be Sulaimaniyah — and the KDP, whose president is trying to win seats in Erbil and Dahuk, but not in Sulaimaniyah.

The three Kurdish Islamic parties — the Kurdistan Islamic Union, which is the Kurdish branch of the Muslim Brotherhood, al-Jama’a al-Islamiyya and the Islamic Movement of Kurdistan — are in a competitive position for a number of seats in Dahuk and Sulaimaniyah.

The Kurdish elections will determine the political parties’ relative weight, which explains why this time there are no multiparty alliances as there were in 2009. Back then, Talabani’s and Barzani’s parties were on the same list. Together, they won about 57% of the seats, which allowed them to form a government.

Some Kurdish political groups have estimated that the political map that will emerge from the elections will not be much different from the one in 2009. But in his campaign inauguration speech in Sulaimaniyah, which Al-Monitor attended, MC leader Mustafa said that he believes his party can win most parliamentary seats and succeed in forming a government. He promised security and economic reforms if his party came to power.

PUK Vice President Barham Salih has described the Iraqi Kurdistan’s elections as “crucial.” He said that the election “results will reveal the route for the future political work in the [Kurdistan] region.”

Aside from the electoral campaigns’ squabbling — for instance, some have pointed to suspicious population increases, especially in Erbil — the Kurdistan region’s campaigns and elections look completely different from those in the rest of Iraq's cities, where local governments were elected in April.

In Sulaimaniyah, Al-Monitor noticed that the candidates' pictures and ads are distributed in an organized way in the streets and that partisan symbols — the PUK’s rose, the MC’s candle and the KDP’s eagle — are more common than the pictures of the party leaders themselves.

The elections in Iraqi Kurdistan are being conducted according to the semi-open list system with the region as a single electoral district.

In addition to car convoys raising the political parties’ flags, the parties are organizing popular gatherings with folk dances and songs, more for mere celebration than to present their electoral programs.

The reason for that, according to the two parties’ supporters, is that their support bases are almost settled. The PUK is supported in the towns and villages around Sulaimaniyah and the MC is strong in the old Sulaimaniyah center. So the race is limited to attracting the votes of the undecided and of those who boycotted the previous election, while few cross-party votes are expected.

During national events, the people of Iraqi Kurdistan wear traditional attire, with the women wearing bright and vivid colors. The elections have become occasions to wear traditional clothes.

Accompanied by the sound of famous Kurdish songs, Al-Monitor’s correspondent left Sulaimaniyah for Erbil, the province’s capital, where the electoral scene is dominated by KDP and Barzani posters. But other than that, the scene looks similar to other areas.

People in Erbil assert that the electoral posters covering the city do not necessarily reflect the voters’ attitudes. For the first time, the KDP may face harsh competition from its former ally — the PUK — which enjoys support in Erbil’s surrounding towns, as well as from the MC, which has aspirations in Erbil.