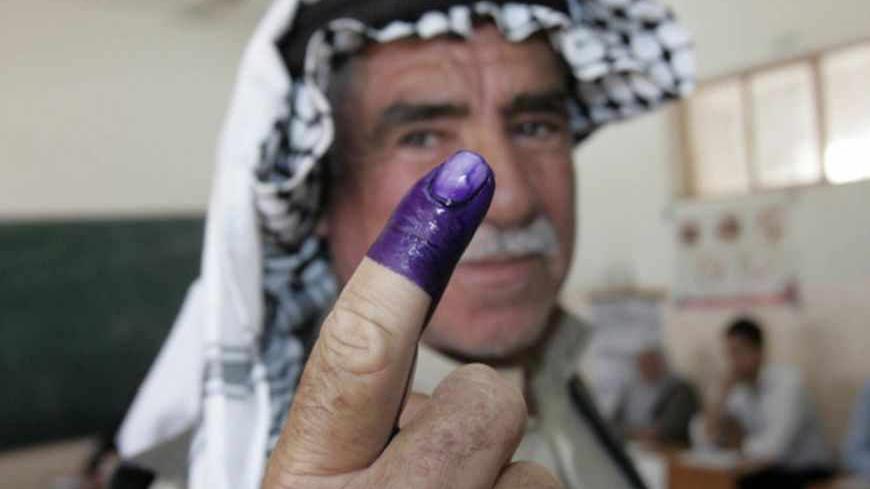 An internally displaced Iraqi man shows his ink-stained finger to the media after voting at a polling center during the country's provincial elections in Kirkuk, April 20, 2013. - REUTERS/Ako Rasheed

In the Iraqi Kurdistan Region, the Kurdish opposition — specifically the Movement for Change — is questioning the recent population increase, abnormal compared with that at the time of the parliamentary elections in 2009 in the region and in 2010 in Iraq.

The Movement for Change led by Mustafa Nushirwan, which split from Iraqi President Jalal Talabani’s Patriotic Union of Kurdistan (PUK) in 2008, is suspicious about the fact that this increase took place in Erbil and Dahuk, cities that are ruled by Massoud Barzani’s Kurdistan Democratic Party (KDP).

On June 9, the Iraqi Kurdistan parliament presented a memorandum to the Independent High Electoral Commission (IHEC) in Iraq to shed some light on the population increase in the region before the Kurdish elections.

Jawhar said, “Until now, we still haven’t received any response from IHEC regarding the memorandum.”

Movement for Change MP Ashti Aziz said that she has “documents that prove the unnatural increase in the population, especially in Erbil and Dahuk.” She adds, “There are 490,000 more people in Erbil and Sulaimaniyah. For this reason, we gathered the signatures of 49 MPs and presented a memorandum to the speaker.”

Regarding the collected information, Aziz noted, “It comes from different sources, and some information was obtained from administrative units in the Ministry of Planning.” Aziz indicated that the population increase occurred “through granting Iraqi civil status IDs and ration cards to Syrian Kurds who came to the region after the [outbreak of] events in Syria. This activity was mostly witnessed in the border regions adjacent to Iran, especially those that are part of Erbil province.”

Since the outbreak of the Syrian revolution two years ago, over 100,000 Syrian refugees have gone to Dahuk province on the border with Syria and Turkey and settled there, while over 30,000 have settled in Erbil, in addition to around 15,000 in Sulaimaniyah.

Regarding the party accused of being involved in this case, Aziz noted, “The legal response to this question awaits the results of the memorandum presented to the parliament. The political response, however, is that the increase has only been seen in Erbil and Dahuk, despite new births being concentrated in Sulaimaniyah — which would normally result in a higher population increase relative to the other two provinces.”

The Barzani-led KDP controls most of the administrative departments in Erbil and Dahuk, since they are under the rule of members and supporters of the party.

The party was established in 1946, headed by Mulla Mustafa Barzani, the father of the current president of the Iraqi Kurdistan Region, Massoud Barzani, who rules the region with his strategic ally, the PUK, led by Talabani.

HEC is getting ready for the parliamentary elections in Iraq and the presidential elections in the region, as well as the city council elections, which are scheduled for Sept. 21. Speaking to Al-Monitor, Serpest Amidi, the head of IHEC in Iraq, denied the abnormal increase in the population and confirmed that, despite that opinion, IHEC is proceeding with the inquiry into the matter and will inform the parliament of its findings.

Regarding the memorandum presented by the Kurdish parliament, Amidi said that a letter was sent to the departments concerned within IHEC, including the department of operations and the department of electoral records, to scrutinize voter records. He added, “If we notice any unnatural increase, we will inform the parliament.”

Amidi also said, “The commission has its own electoral records that are taken from the Iraqi Ministry of Commerce and the citizens’ ration cards. Those records date back to 2007, and they have been subject so far to three updates by IHEC. Furthermore, IHEC doesn’t currently rely on the data of the Ministry of Planning, whether in the Kurdistan Region or Iraq. Instead, we rely solely on the data of the Iraqi Ministry of Planning to determine the number of seats for the municipal councils. The number of seats in the Kurdish parliament is 111, and for that reason, we do not need the data of any of the ministries.”

The Iraqi Kurdistan parliament's 111 seats include 11 seats reserved for the region’s non-Kurdish minority communities. According to the set quota, five seats are reserved for Turkmen, five for Christians and one for the Armenians.

The Iraqi Ministry of Commerce grants ration cards to citizens according to a form submitted by the head of the household. The number of family members, in addition to any impending births must be included. The concerned authorities must be informed of any deaths. This has been called a “ration card” because the beneficiaries receive  a ration of food on a monthly basis.

While the figures of the General Committee of the Statistics Department at the Ministry of Planning indicate that the noted population increase in the region was based on counting operations conducted in 2009 in the region in preparation for a general census. However, the Iraqi government has suspended the operation until further notice.