Iraqi parliament speaker Mohammed al-Halbusi resigned from his post but is expected to be re-elected. 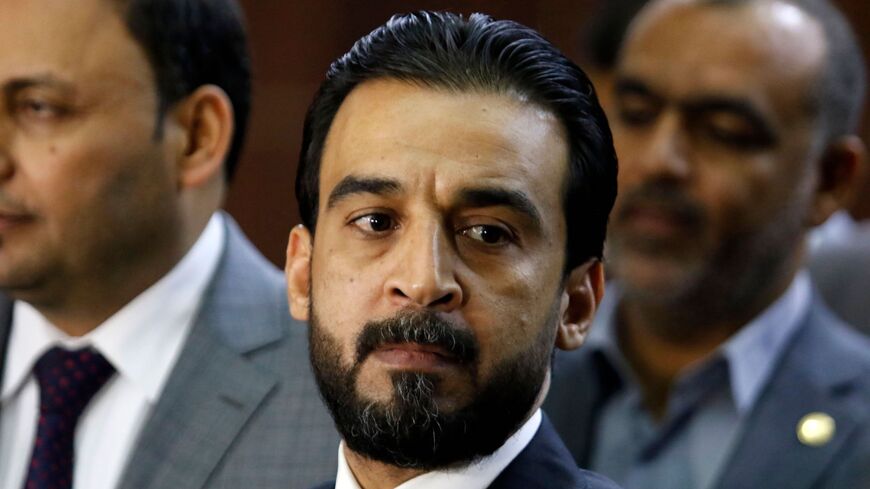 Mohammed al-Halbusi, the newly elected speaker of the Iraqi parliament, arrives to speak to the press on Sept. 18, 2018, following a meeting in Basra. - HAIDAR MOHAMMED ALI/AFP via Getty Images

The Iraqi parliament announced today that it will hold a session on Sept. 28 to vote on parliament speaker Mohammed al-Halbusi's resignation.

Halbusi was elected last January by the triple alliance of Shiite Sadrists, the Sunni Taqaddum bloc and the Kurdistan Democratic Party.

The alliance failed to form a government and select a president due to the requirement of the presence of two-thirds of parliament. The Sadrists' rival, the Coordination Framework, was able to form a blocking third, halting the process of selecting the parliament.

Sadrist members finally withdrew last June from the parliament per the orders of their leader, Muqtada al-Sadr, which made room for the Coordination Framework to replace Sadrist members and become the largest bloc.

The Coordination Framework negotiated to form the new government first by nominating Mohammed Shia al-Sudani, which led to Sadrists storming the parliament and then to bloody clashes in the Green Zone in late July.

Sadr eventually ordered his followers to withdraw from the Green Zone to stop the clashes.

The Shiite Arbaeen ceremony gave way to a period of calm and reduced political tensions. With that, the Coordination Framework resumed its negotiations to form the government immediately following Arbaeen on Sept. 17.

A source from the Coordination Framework told Al-Monitor that it reached an agreement on Sept. 25 with the alliance of the Taqaddum bloc led by Halbusi and the Kurdistan Democratic Party led by Massoud Barzani.

The Coordination Framework is hoping to include the Sadrists in the process of forming the government.

Sadr has not yet reacted to these latest developments.

It is expected that the parliament members will re-elect Halbusi based on a new alliance.

According to the recent agreement between the Coordination Framework, Taqaddum and the KDP, the provincial elections will be held before the next national elections, forming a consensual government that shares posts with all political parties based on their seats; the agreement also mentions amending the electoral law.

The new alliance calls itself the State Administration Coalition.

There is no confirmation yet on the agreement of a president and prime minister.

The president is normally a Kurd. But the two Kurdish parties — the KDP and the Patriotic Union of Kurdistan (PUK) — disagreed on each other's nomination, as the KDP nominated Kurdistan Interior Minister Ahmed Ribber and the PUK supported a second term for Barham Salih.

In regard to the prime minister, who is usually a Shiite, it is not known yet whether Sudani is still the nominated candidate or whether the Coordination Framework will nominate a new candidate.

Sadrist reactions to new developments and whether they will join the new government will determine the possibility of forming a stable government.