Iraq's federal court ruled today that it cannot dissolve parliament and only parliament can dissolve itself. 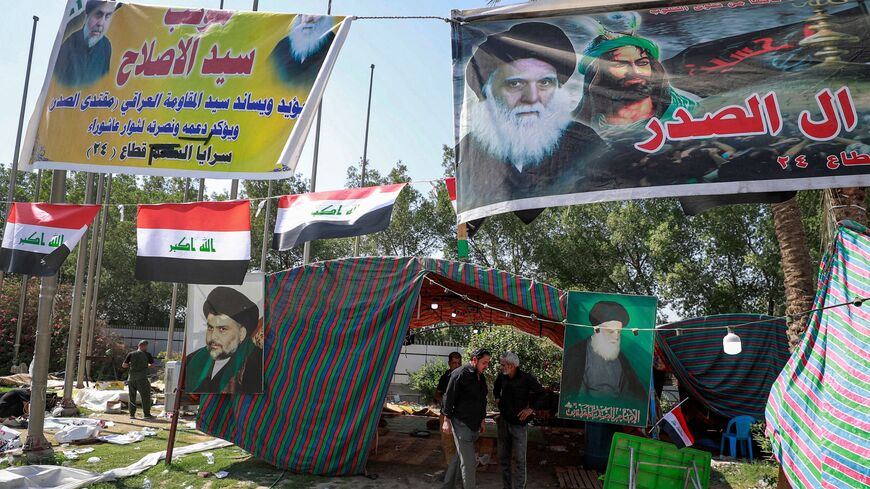 This picture taken on Aug. 30, 2022, shows a view of the remaining encampments of supporters of Shiite Muslim cleric Muqtada al-Sadr before their dismantlement in Baghdad's high-security Green Zone. - AHMAD AL-RUBAYE/AFP via Getty Images

Iraq's federal court has dismissed a lawsuit calling for the dissolution of the country's legislature, following a request by followers of Shiite cleric Muqtada al-Sadr for the judiciary to get involved due to lawmakers' inability to form a government more than 10 months after elections.

The federal court rejected the case, filed by a group of lawyers that included Sadrists, saying the courts lack the authority to interfere in the legislative or executive processes. While the judiciary stressed there was no constitutional basis for such a decision, it encouraged the parliamentarians to carry out their constitutional duties by either forming the government or dissolving parliament.

“The penalty imposed on the House of Representatives for not carrying out its constitutional duties is to dissolve the House when there are justifications for it,” the court ruled.

In last October's elections, Sadrists won the most seats in a parliament of any party (73 out of 329) and formed an alliance with the Sunni Taqaddum party led by parliament speaker Mohammed al-Halbusi and the Kurdistan Democratic Party led by Massoud Barzani. However, they failed to form a government since they did not have a big enough alliance to select the president, which requires two-thirds of the members.

According to the Iraqi Constitution, parliament elects a president by a two-thirds majority. However, if no candidate receives the requisite votes in an initial round, the top two candidates are put up for a second vote and the one who receives a simple majority is declared president.

The federal court has had a role in halting the formation of a government since it ruled that the legislature's quorum for selecting a president is two-thirds of the members. This means that if one-third of lawmakers fail to show up, a president cannot be selected and the government formation process cannot proceed.

This ruling allowed the Coordination Framework, which is a rival Shiite coalition to the Sadrists, to stop the government formation process by boycotting the session for selecting the president. Thus, as the first session has not taken place at all, the door has been closed for going forward with a second vote in which only a simple majority is needed.

Sadrists resigned in June from parliament, opening the path for the Coordination Framework to become the largest bloc by replacing the majority of the Sadrists' seats.

The Coordination Framework moved forward with forming a government, nominating Mohammed Shia al-Sudani to the position of prime minister.

This move raised the ire of Sadrists, leading them to storm the parliament and occupy the building later in July. Parliament has not held any sessions since.

Last week, following the bloody clashes that occurred between Sadrists and the Popular Mobilization Units, Sadr ordered his followers to vacate all the positions occupied by them in the Green Zone, including the parliament building.

Parliament is expected to hold its first session after Sept. 16, following the Shiite religious holiday Arbaeen.

If parliament goes ahead with a plan for dissolving itself and holding early elections, this could bring calm to Iraq's streets and encourage all parties to compete in the elections instead of battling it out on the streets.

Yet if lawmakers move toward forming a new government in the absence of Sadrists, this will certainly increase tensions and there is a high possibility that Sadrists would storm parliament again to stop the process.

In this context, the federal court ruling is an opportunity for Iraq's political parties to reach an agreement over the government formation process and early elections.

This comes in conjunction with the government's initiative for a national dialogue that held its second session on Sept. 5.

While Sadrists did not attend the session, the final statement included positive signals to them, as it emphasized the need to form a technical committee for organizing early elections — a demand that had been made by Sadrists.

Simultaneously with the government's efforts to bring all parties to the negotiation table, regional forces and the international community are also pushing for continued national dialogue to reach an agreement between all parties.

In her meeting with Iraqi Prime Minister Mustafa al-Kadhimi on Sept. 4, US Assistant Secretary of State for Near Eastern Affairs Barbara Leaf affirmed President Joe Biden's call on all Iraqi leaders to engage in national dialogue to overcome the crisis and forge a way forward to consolidate Iraq's security and stability.

Kadhimi also met with the Special Representative of the Secretary-General of the United Nations in Iraq Jeanine Plasschaert on Sept. 7. Kadhimi's office issued a statement following the meeting, noting the two sides emphasized the “importance of supporting the national dialogue initiative that was called for by the prime minister, and they agreed that adopting the dialogue approach is the only way out of the current political crisis, and a guarantee for Iraq's security and domestic stability, in a way that meets the Iraqis' demands and aspirations for a safe and dignified life."

In a phone call with Kadhimi, Iranian Vice President Muhammad Mokhber stressed the importance of the national dialogue initiative and the Iraqi government's efforts to reconcile interparty conflict, praising the government's approach to addressing the political crisis in Iraq.