Speaker of the Iraqi parliament Mohammed al-Halbusi suspended parliament in response to Sadrist protesters who have occupied the Green Zone, closing down for now the prospects of a government formation. 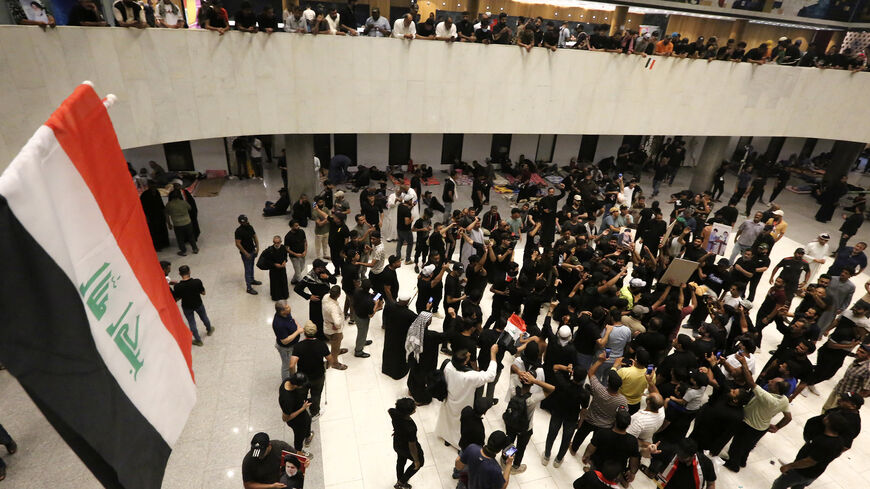 The Sadrists (named after their leader, Shiite cleric Muqtada al-Sadr) are occupying the parliament inside the Green Zone, where most of state buildings and foreign embassies are located.

Supporters of the Coordination Framework, which includes pro-Iran parties and militias, demonstrated in Jadriya area close to the suspension bridge that leads to the Green Zone. However, they did not enter the Green Zone in order to avoid confrontation with the Sadrists.

Prior to the protests, several Iraqi leaders — including Shiites, Sunnis, Kurds and even minorities — issued statements calling for calm and de-escalation in order to open a national dialogue between the two rival Shiite groups.

The recent crisis started when hundreds of pro-Sadrist protesters entered the Green Zone in Baghdad on July 30, to express their rejection to the nomination of Mohammed Shia al-Sudani by the Coordination Framework for the position of prime minister.

Sudani is known as a figure close to head of the Dawa party Nouri al-Maliki, who has been in a hostile relationship with Sadr for many years.

The Sadrist protesters are targeting two state institutions in particular: the parliament and the judiciary.

The Sadrist movement won the most seats in the elections in October 2021 — 74 seats in the 329-member Council of Representatives — and made an alliance with the Sunni Taqaddum bloc led by parliament Speaker Mohammed al-Halbusi and the Kurdistan Democratic Party led by Massoud Barzani. However, they failed to form a government due to the third block in the parliament formed by the Iran-backed Coordination Framework.

During this time, the judiciary issued a number of court rulings, which the Sadrists considered as support for the Coordination Framework. The most notable ruling was the acknowledgment of the third block as a legal obstacle against selecting the president. This decision killed the attempt of forming a government by Sadr and his allies.

"The quorum [to elect the president] is achieved in the presence of two-thirds of the total number of members of the total parliament," the federal court stated in its ruling Feb. 8.

As a result, Sadrists withdrew from the parliament June 12, clearing the way for the Coordination Framework to form the government.

This explains the reason behind the Sadrist move against the parliament and the judiciary in particular.

Sadr, however, has been careful not to target the judiciary; he ordered his followers within hours of gathering around the judiciary building to withdraw and gather at the parliament building only.

Sadr's move to have his followers occupy the parliament has raised the ire of the Coordination Framework, leading them to call for rival protests in the Green Zone on Jul. 30. However, within hours they withdrew the call asking for de-escalation instead. The protests finally took place on Aug. 1, outside of the Green Zone.

Simultaneously, the Popular Mobilization Units (PMU) spread in some areas of the Green Zone and positioned around their headquarters close to Ibn Sina Hospital and around the residencies of the PMU leaders, such as Hadi al-Amiri, Falih al-Fayadh and Maliki.

Pro-Sadrist Telegram channels and social media pages published a map of Maliki's house July 31, calling upon the protesters to rally there.

In an Aug. 1 tweet, Sadr called upon all Iraqis, including the tribes and the PMU, to join the Sadrists and move forward toward a comprehensive revolution for a “fundamental change in the political system.”

Prime Minister Mustafa al-Kadhimi addressed the public in a short video, calling on “everyone to be calm, patient and rational and not be drawn into confrontation. … Everyone bears the responsibility — the parties, political class, social forces and other influencers [initiating a broad national dialogue]. Political blocs must sit down, negotiate and reach an understanding for the sake of Iraq and the Iraqis. The language of treason and exclusion must be avoided, and a high and inclusive national spirit must be exhibited.”

He continued, “A thousand days of quiet dialogue is better than a moment in which a drop of Iraqi blood is shed."

On the regional side, while the Gulf states are expressing concern about developments in Iraq, Iran is also seeking to navigate the turbulent politics of its neighbor.

Iran prefers comity among Iraq's Shiite parties, rather than the hostile division between the Coordination Framework and the Sadrists.

Last week, the head of Iran's Islamic Revolutionary Guard Corps' Quds Force, Ismail Ghaani, traveled to Iraq in order to try to mediate the dispute after Sudani's nomination — to no avail, as the Sadrist demonstations started soon after.

Halbusi's suspension of the parliament shuts down the prospect of a government formation for now, and Sudani's nomination has been scuttled by the protests.

“Beware of the continuation of political tension, lest the mines, which we have sought in the past two years to quietly dismantle and explode,” Kadhimi said.