Clashes between rival Shiite groups, the Sadrists and the Popular Mobilization Units, have left more than 20 dead and hundreds injured. 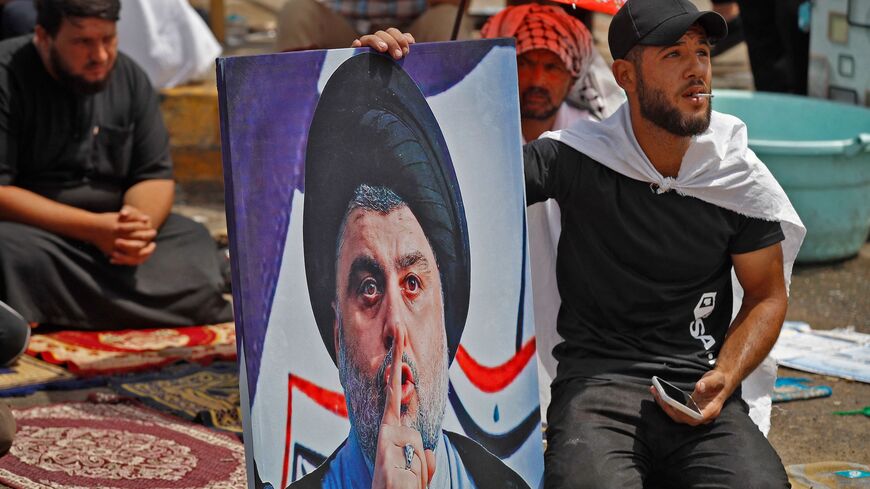 A supporter of Iraqi Shiite cleric Muqtada al-Sadr sits with his portrait during the weekly Friday prayers at the vigil outside parliament headquarters in Baghdad's high-security Green Zone on Aug. 26, 2022. - AHMAD AL-RUBAYE/AFP via Getty Images

Hundreds of supporters of Iraqi Shiite cleric Muqtada al-Sadr stormed the government palace early Monday morning. This is the third building they have stormed in the past month, after similar incidents at the parliament and the judiciary headquarters.

This happened after Ayatollah Sayyed Kadhim al-Haeri, a religious authority close to the Shiite militias that are rivals to the Sadrists, condemned protests by Sadr's followers and criticized their leader, saying he was not qualified to be a leader for the Sadrists.

The government palace is the main government building where weekly Cabinet sessions take place and is located in Baghdad's Green Zone.

Prime Minister Mustafa al-Kadhimi immediately reacted to the event, suspending Cabinet sessions until further notice and calling upon the protesters to evacuate the palace and the Green Zone in general.

“We renew the call for restraint from everyone, and we call on the demonstrators to immediately withdraw from the Green Zone and abide by the instructions of the security forces responsible for protecting official institutions and the lives of citizens,” he said in another statement.

The United Nations Assistance Mission for Iraq (UNAMI) issued a statement calling the recent development a “dangerous escalation” and calling on “all protesters to leave the International Zone and vacate governmental buildings," while urging “maximum restraint."

The US Embassy in Baghdad also expressed concerns about "escalating tensions" in a statement and said it "urges all parties to remain peaceful and refrain from acts that could lead to a cycle of violence."

Iraqi security forces were able to evacuate the government palace after a few hours and secure the building from another storming by the protesters.

However, late Monday afternoon a clash took place between the Popular Mobilization Units (PMU) and the protesters close to the PMU's headquarters inside the Green Zone.

The clash quickly became violent as the PMU forces started shooting live bullets at the protesters, which resulted in dozens of injuries and left two dead.

This is while the prime minister, who is also commander-in-chief of the armed forces, had issued a statement ordering all security forces to refrain from using live bullets in dealing with the protesters and calling upon all forces except the special force for protecting the Green Zone to not get involved in dealing with the protests due to the sensitivity of the matter.

Sadrists reacted immediately to the PMU shootings by deploying Saraya al-Salam, which is a military faction affiliated with the Sadrist movement. The clash expanded soon to different areas of the Green Zone and even spread to the surrounding areas.

This is in addition to both sides targeting several buildings in Baghdad and a few other southern provinces.

The Coordination Framework, which is the rival Shiite group to the Sadrists, condemned the violence and called on all parties to de-escalate and return to the negotiation table.

As the violence continued in Baghdad, Sadr announced that is on a hunger strike until all parties stop the violence.

Hadi al-Amiri, leader of the Badr Organization (one of the PMU factions), also mediated with other PMU leaders, calling for a complete cease-fire and reducing tensions.

Kadhimi praised the two figures' stances, calling upon all sides to act responsibly.

Following these incidents, the violence has now significantly been reduced, although occasional gunfire could still be heard from the Green Zone and the surrounding areas late Monday night.

Iraq has been witnessing a conflict between two main Shiite groups, the Sadrists and the Coordination Framework, since the last elections in October 2021.

Sadrists won the elections with 74 seats and formed an alliance with the Sunni Taqaddoum Party led by parliament speaker Mohammed al-Halbusi and the Kurdistan Democratic Party led by Massoud Barzani.

The Coordination Framework rejected the elections results and protested against the results around the Green Zone for two months, until they forced to accept after the federal court approval of the results.

Sadr, however, failed to gather the necessary seats to form a new government due to the Coordination Framework's success in forming a so-called "blocking third" that stopped the selection of the president as a part of the government formation process.

Sadr finally withdrew from the parliament, opening up space for the Coordination Framework. However, the nomination of Muhammad Shia al-Sudani to the post of premier angered Sadrists, leading them to storm the parliament last month. Sudani is close to former Prime Minister Nouri al-Maliki, a prominent foe of Sadr.

Kadhimi had initiated a national dialogue campaign, the first session of which was held two weeks ago, with the participation of all Iraqi political parties except Sadrists. The attendees agreed on holding early elections to end the political deadlock and called on Sadrists to attend the next session to discuss the details.

However, the storming of the judiciary headquarters halted those negotiations.

It is unclear if the initiative for a national dialogue can be revived following Monday's bloodshed, which means the country's crisis is expected to continue for some time even if the violence stops at this stage.