Following Shiite cleric Muqtada al-Sadr's order, his followers have withdrawn completely from the Green Zone and evacuated the parliament building. 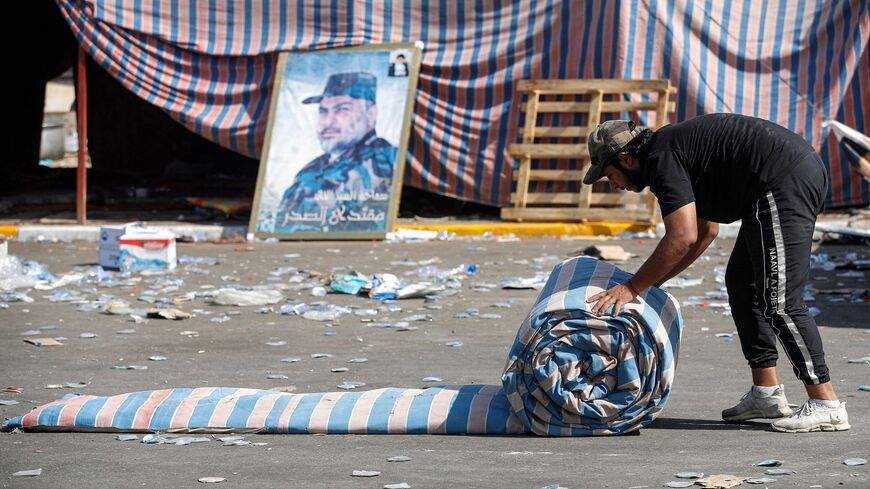 A supporter of Shiite Muslim cleric Muqtada al-Sadr rolls a mattress as an encampment in Baghdad's high-security Green Zone is dismantled on Aug. 30, 2022. - AHMAD AL-RUBAYE/AFP via Getty Images

At a press conference at noon in Baghdad, the leader of the Sadrist movement, Shiite cleric Muqtada al-Sadr, ordered his followers to withdraw from the Green Zone within 60 minutes.

They quickly complied and have withdrawn from all their positions, including the parliament building that was previously occupied by them a month ago.

Bloody clashes erupted early Monday evening between Sadrist-affiliated fighters and rival Shiite groups. Members of the Popular Mobilization Units, Shiite militias that are on the government's payroll, and Saraya al-Salam, a Sadrist militia, engaged in fighting in the Green Zone that continued until midnight, using heavy weapons including rockets and RPGs.

The clashes left at least 20 dead and injured around 200.

“The killer and the person killed are both in hell,” Sadr said. “If the armed factions had been dissolved, Iraq would not have reached this situation.”

The top Shiite cleric said he has abandoned politics and will not participate in any government.

In Iraq's last elections in October 2021, Sadrists won the most seats of any party — 74 out of 329  — and formed an alliance with the Sunni Taqaddoum Party led by parliament speaker Mohammed al-Halbusi and the Kurdistan Democratic Party led by Massoud Barzani. Yet Sadr was unable to form a new government due to his rival group the Coordination Framework's success in bringing together a so-called blocking third that halted the process of selecting the president as part of government formation.

In his address today, Sadr also thanked the security forces and the prime minister for not taking part in the conflict and expressing gratitude to the majority of PMU members, who did not get involved in yesterday's clashes. He placed the blame on their commanders, saying they led the situation to violence.

The president, the prime minister, the parliament speaker and many other Iraqi leaders and politicians praised Sadr's statements.

On the other side, the Coordination Framework, the rival Shiite political group to the Sadrists, also began withdrawing its supporters from the suspension bridge area leading to the Green Zone. The gate is expected to reopen later today.

The Joint Cooperation Command cancelled the curfew put in place yesterday soon after clashes started in Baghdad and other southern provinces.

Reactions to Sadr's call from members of the Coordination Framework were split. The majority praised Sadr's move to reduce tensions and stop the bloodshed, while others like former Prime Minister Nouri al-Maliki called out Sadr's recent moves as illegal and praised the PMU for protecting the state.

The United Nations Mission for Iraq welcomed “the most recent moderate declaration" by Sadr, adding that “restraint and calm are necessary for reason to prevail."

Despite the calm, there is still risk of another clash since no solution has been found to overcome the political deadlock.

On Monday evening, President Barham Salih addressed the nation, calling for early elections and reforms based on a national dialogue that brings stability to the country.

"We are facing a deep crisis related to the system of governance, and the voice of the people demanding its reform was clear in frequent protests for a decade, which were met with indifference, lack of will and belittling," Salih said. Public protests "will continue and escalate if the situation continues without reform," he added.

Yet the Coordination Framework released a statement late today that was aggressive in tone and sure to provoke the Sadrists. The statement called for resuming parliament sessions and the formation of the government, without any mention of early elections. The Coordination Framework also thanked the PMU for protecting the state and restoring order.

Such rhetoric indicates the crisis is yet to end and a new wave of escalation could be coming soon.