Iraqi and international leaders are responding positively to the prime minister's call fior national dialogue among the various political parties. 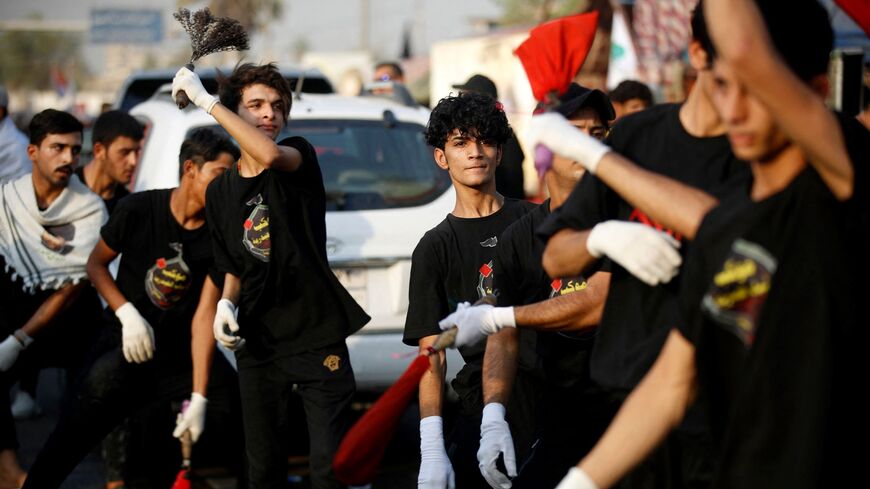 Iraqis flagellate themselves with chains during the mourning period of Ashura, outside the Iraqi parliament, as supporters of cleric Moqtada Sadr occupy the building for a fifth consecutive day, in protest at a nomination for prime minister by a rival Shiite faction on August 3, 2022. -Moqtada Sadr, whose bloc won the most seats in Iraq's elections last year, demanded today that parliament be dissolved and new elections be called. - AHMAD AL-RUBAYE/AFP via Getty Images

The two Shiite camps — followers of populist Shiite cleric Muqtada al-Sadr and an umbrella of pro-Iran Shiite groups known as the Coordination Framework — have taken to the streets campaigning against each other, raising concerns over possible armed clash between the two sides.

Sadrist protesters entered the Green Zone on July  30 and stormed the parliament building. Meanwhile the Coordination Framework organized rival protests on Aug 1, which finished with no clash or confrontation with the Sadrists.

Kadhimi called the same day on the demonstrators to evacuate the parliament and respect state institutions. He also called for forming a national dialogue committee that includes all parties' representatives to chart a solution roadmap.

Sadrists indeed evacuated the parliament building on Aug 2, as a gesture of goodwill. However, they remained in the surrounding areas inside the Green Zone, to maintain pressure.

On the international side, the French president, Emmanuel Macron, the representative of United Nations, Jeanine Plasschaert and the United State ambassador to Iraq, Alina Romanowski supported the call for a national dialogue.

Sadr is reacting cautiously. In a public speech on Aug. 3, he said he is not against the dialogue, but “no dialogue with those who I already tried in the past and only resulted in corruption and destruction for the country." He said, "We tried to form a national majority government but they (the Coordination Framework) stood against it and killed it with malicious attempts."

Sadr had won 74 seats in the last elections and formed an alliance with the Sunni Taqaddum party, led by the parliament speaker Muhammad Halbousi with 62 seats, and the Kurdistan Democratic Party, led by Masoud Barzani with 31 seats. However, they failed to form a government due to the Coordination Framework's blocking third, which prevented them from selecting the president as a part of government formation requiring two-thirds of the parliament members.

Sadr withdrew from the parliament in June, and the Coordination Framework attempted to form a government, nominating Muhammad Shia Sudani for the prime minister position. Sudani is known to be close to the former prime minister Nouri Maliki and the head of Asa'ib Ahl al-Haq, Qais Khazali. Both have historically hostile relations with Sadr and both are prominent leaders of the Coordination Framework.

The nomination of Sudani, a few days after a tape leak from Maliki threatened to assassinate Sadr,  led Sadr's followers to storm the parliament.

In his speech today, Sadr referred to the tape leak, calling on the Coordination Framework to remove all “old faces” including those of Sadrists who are involved in corruption and criminal acts. Sadr demanded early elections after the dissolution of the parliament, but he did not explain his conditions or timing for these elections.

He had called earlier this week for a massive Friday prayer inside the Green Zone.