The Shiite political parties are split into two rival camps, the Sadrists and the Coordination Framework, which is far less than unified. 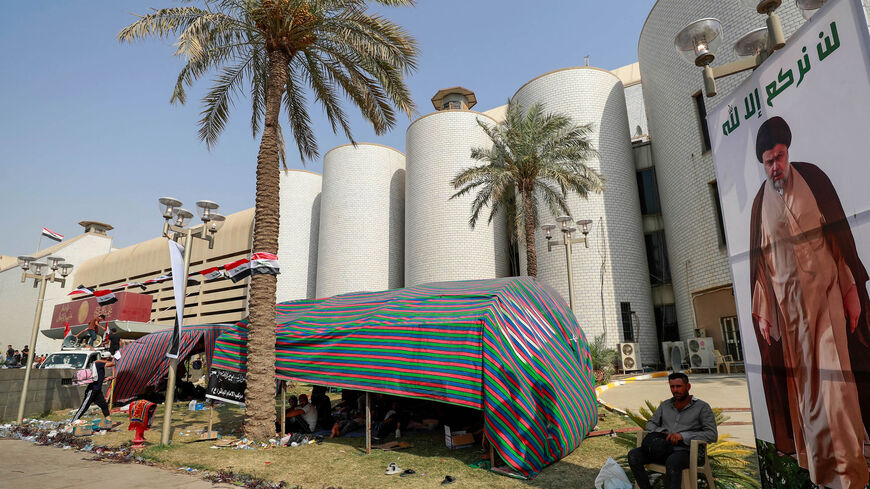 Supporters of Shiite cleric Muqtada al-Sadr gather outside the parliament building on the seventh day of protests against the nomination of a rival Shiite faction for the position of prime minister in the Green Zone, Baghdad, Iraq, Aug. 5, 2022. - Ahmad al-Rubaye/AFP via Getty Images

BAGHDAD — Since last elections in October, the Shiite political scene has been divided into two rival camps: the Sadrists, who won the largest bloc with 73 seats, and the Coordination Framework, which consists of parties and militia-affiliated groups supported by Iran.

The two groups are battling both in the parliament and on the streets. A number of protests were organized by the two sides before they both held protests simultaneously on Aug 12.

Immediately after the elections, the Coordination Framework organized protests against alleged fraud in the elections at the suspension bridge at the Green Zone, where most state buildings and foreign embassies are located.

Sadrists and their Sunni and Kurdish allies, the Taqaddum Colalition led by parliament speaker Muhammad Halbousi and the Kurdistan Democratic Party led by Masoud Barzani, worked to form a majority government. But with a blocking third in the parliament, the Coordination Framework prevented the Sadr-Halbousi-Barzani government from selecting a president.

The Sadrists withdrew from the parliament in June, and the Coordination Framework became the largest bloc with around 40 extra seats from replacing them. They moved forward to form a government, nominating Muhammad Shia Sudani for the premiership. The move angered the Sadrists, as Sudani is close to former Prime Minister Nouri al-Maliki, who has long been in conflict with them.

The Sadrists took to the streets and occupied the parliament, stopping the Coordination Framework from forming an anti-Sadrist  government.

The Coordination Framework organized its own protest at the suspension bridge.

After the Sadrists stormed the parliament, their leader Muqtada Sadr called for dissolving the parliament and holding early elections.

Sadr is asking the federal court to immediately dissolve the parliament for its failure to form a new government and for the current government to organize the early elections.

Sadr is asking for the dissolution of the parliament by the judiciary, which would require a change to the constitution, which needs a vote by the parliament. The idea was previously proposed by the head of Iraq's judiciary, Faiq Zaidan.

What the Coordination Framework wants

While the Coordination Framework expressed agreement with Sadr's demand, it asked to return to parliament in order to form a new government that would then dissolve itself and prepare for early elections. Sadr rejects the idea.

The Coordination Framework is also seeking to amend the electoral law and the electoral commission, as well as a return to the manual counting system instead of the electronic system that was adopted in the last elections.

The Coordination Framework’s members seek to reduce the number of electoral districts and blames that the law for their weak representation in parliament. They also accuse the Independent High Electoral Commission of fraud and rigging the elections.

Sadr rejects the change as well as the Coordination Framework's offer to form a consensual government with the Sadrists.

If early elections are held, it is unlikely that either will gather enough votes to form a government alone and the situation will be brought back to square one.

This is another area that requires constitution amendment, however, similar to the previous area, it is difficult to acquire agreement between the rival groups about it.

What can the government do?

The crisis is likely to drag on for many reasons as the Coordination Framework maintains its positions and conditions so as not to seem weak.

Amid this intense conflict, Prime Minister Mustafa al-Kadhimi called last week for dialogue without any preconditions, threats or violations of the law.

Kadhimi is holding regular meetings with political leaders from all sides to prepare for holding a national dialogue, but the goals is far off as the two rival groups are increasingly flexing against each other in the streets and in the media.

Iraq is in need of a new political contract including changes to its rigid constitution, whose drafting was rushed in 2005 and made making amendments difficult.

Punitive statutes are needed to uphold the deadline to form a cabinet and others for parliamentary activities.

Without dialogue and its resulting changes before the early election, this ballot, like the previous ones, will give rise to still more crises.

If no political solution is reached amid failed political initiatives and a prolonged crisis, tension will likely increase in the street, especially among supporters of the Shiite political parties that have their own armed wings, such as Saraya al-Salam for the Sadrist movement, Asaib Ahl al-Haq, al-Nujaba and Hezbollah.

Although these parties called for self-restraint and pledged that they will remain peaceful, there is still great potential for escalation and confrontation, especially following the recently leaked audio recording of Maliki speaking of an “inevitable interShiite war” and his intention to form his own army to fight Sadr in Najaf. All Shiite armed factions have been on high alert since Sadr’s supporters started their sit-in in the parliament building.