Sadrist protesters stormed parliament today, rejecting the formation of the government under the premiership of Muhammad Shia Sudani, who was nominated recently by a rival Shia colaition. 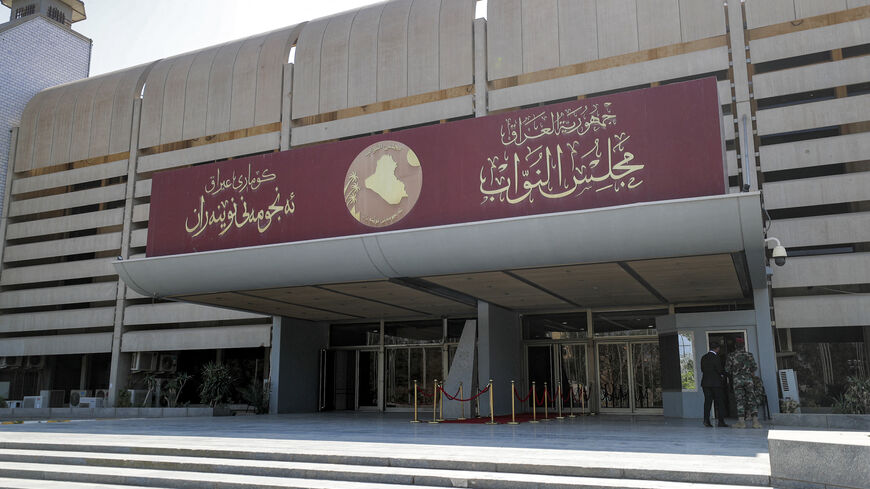 This picture taken on March 26, 2022, shows a view of the exterior of Iraq's Council of Representatives, the country's unicameral legislature, in Baghdad's heavily fortified Green Zone. - AHMAD AL-RUBAYE/AFP via Getty Images

Hundreds of protesters, many of them followers of influential Shiite cleric Muqtada al-Sadr, gathered in Tahrir Square early this evening and then moved toward the Green Zone where the majority of government buildings and foreign ministries are located. The number of protesters increased significantly in a short amount of time, backed by cranes that destroyed the cement walls in front of the Green Zone gate next to the Foreign Ministry.

They entered the area quickly and stormed parliament. Photos and videos of Sadrist protesters chanting inside parliament circulated on social media. Protesters raised Sadr's and his father’s photos and chanted for change to the entire political system.

This came a few hours after parliament received a letter from the Coordination Framework (CF) requesting a session to select the president.

Sadr rejected Sudani on the same day the CF nominated him. Sadr considers Sudani a facade for former Prime Minister Nouri al-Maliki, who is in a bitter dispute with Sadr.

It appears that the Sadrists' protests today and the attack on parliament in particular are reactions to the attempt to form what the populist cleric and others consider as an anti-Sadr government.

Sadr won the largest bloc in the elections last October and formed an alliance with the Sunni Taqaddum bloc led by the parliament speaker Mohammed al-Halbusi and the Kurdistan Democratic Party led by Massoud Barzani.

Sadr failed to form a government due to formation by the CF of a blocking third in the parliament, which halted the process for months. Finally, Sadr withdrew from parliament last month, opening a space for the CF to form the government.

But the formation of a government by the CF under the leadership of Sudani, who is known to be close to Maliki, raised Sadr's ire.

Sadrists' storming of parliament is a clear message to the CF that Sadr will not allow it to form an anti-Sadrist government.

Following the storming of parliament, Sadr tweeted for his followers to leave parliament, approving of their conduct and saying that it was enough of a message to the CF for now. “Your message was received,” he said.

Prime Minister Mustafa al-Kadhimi, who was in Anbar province this morning laying the foundation stone for a new electricity plant, left the province immediately and returned to Baghdad.

“The Commander-in-Chief of the Armed Forces calls on the demonstrators to immediately withdraw from the parliament building, which represents the authority of the people and the law,” Kadhimi said in a statement.

The CF held a meeting immediately and issued a statement slamming the protesters' actions, calling it a conspiracy against the democratic process in Iraq.

The CF also slammed Kadhimi in their statement, saying, “We hold the caretaker government fully responsible for the security and safety of government departments and their employees, diplomatic missions, and public and private properties, and we demand that it take firm measures to maintain security and order and prevent chaos and illegal practices.”