United Nations special representative Jeanine Plasschaert met with Muqtada al-Sadr in Najaf, but so far there are no signs of a compromise. 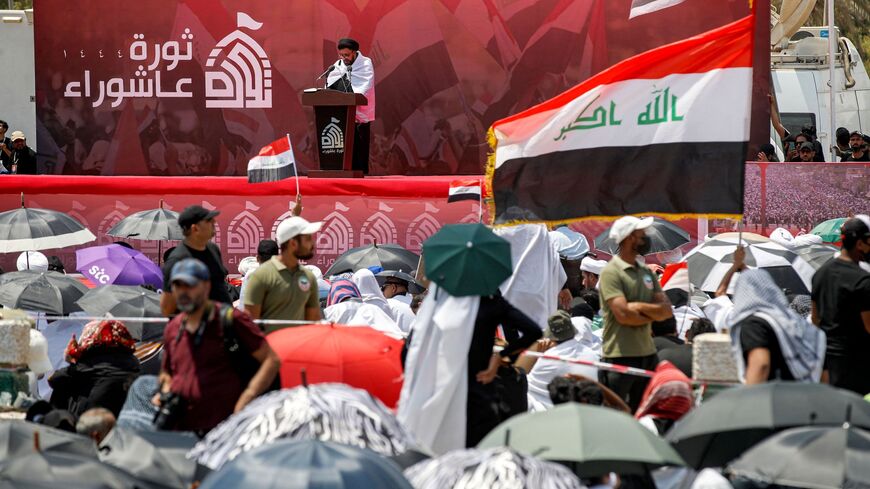 Supporters of Iraqi cleric Moqtada Sadr gather at the Iraqi capital Baghdad's high-security Green Zone as they continue their protest against a nomination for prime minister by a rival Shiite faction, on August 5, 2022. - AHMAD AL-RUBAYE/AFP via Getty Images

Thousands of Shiite protesters gathered in Grand Festivities Square in the heart of Baghdad's Green Zone to perform Friday prayer, summoned by populist Shiite cleric Muqtada al-Sadr to send a message to his rivals.

Huge numbers of pro-Sadrists from Baghdad and other provinces overflowed the public areas of the square, a national symbol for Iraq and the site of most of the country's military parades.

Two days earlier, Sadr called for fundamental changes in the Iraqi political system. He asked for the removal of the political class after 2003 and demanded the dissolution of the current parliament and another set of early elections.

Sadr has rejected the prime ministerial candidate of the the Coordination Framework, a rival alliance of Shia parties, including those aligned with Iran.

Also on Friday, the special representative of the UN for Iraq, Jeanine Plasschaert, visited Najaf and met with Sadr.

Afterward, Plasschaeert said that "the meeting with Sadr witnessed the importance of finding a solution to the current political crisis."

Sadr may be playing his cards close, rejecting a request for reconciliation with Hadi Al Ameri, who is considered close to Iran, unless Ameri quits the Coordination Framework.

This comes following Iraqi Prime Minister Mustafa al-Kadhimi's call for a national dialogue to solve the current political crisis, which was welcomed by a majority of Iraqi leaders. Sadrists evacuated the Iraqi parliament immediately, which they had been occupying since July 30, as a gesture of goodwill. Ameri, on behalf of the Coordination Framework, welcomed the prime minister's call and asked Sadr to accept him for direct dialogue.

Sadr had accused the Coordination Framework in his last public speech on Aug 3 of conspiring against him and his movement.

“No dialogue with those who I already tried in the past and only resulted in corruption and destruction for the country," Sadr said. "We tried to form a national majority government but they (the Coordination Framework) stood against it and killed it with malicious attempts."

Sadr was referring to federal court rulings which halted the process of forming the majority government by Sadr and his Sunni and Kurd allies, the Taqaddum Coalition led by the parliament speaker Muhammad Halbousi and the Kurdistan Democratic Party led by Masoud Barzani.

What added oil to fire was a tape leak from Nouri Maliki, a prominent leader of the Coordination Framework, talking against Sadr and expressing willingness to assassinate him.

In such circumstances, it seems that Sadr is willing to talk to his rival and agree on early election plan but only on the condition of letting him form a majority government after the elections.