Muqtada al-Sadr organized a public prayer on Friday, making a comeback to politics after months of silence. 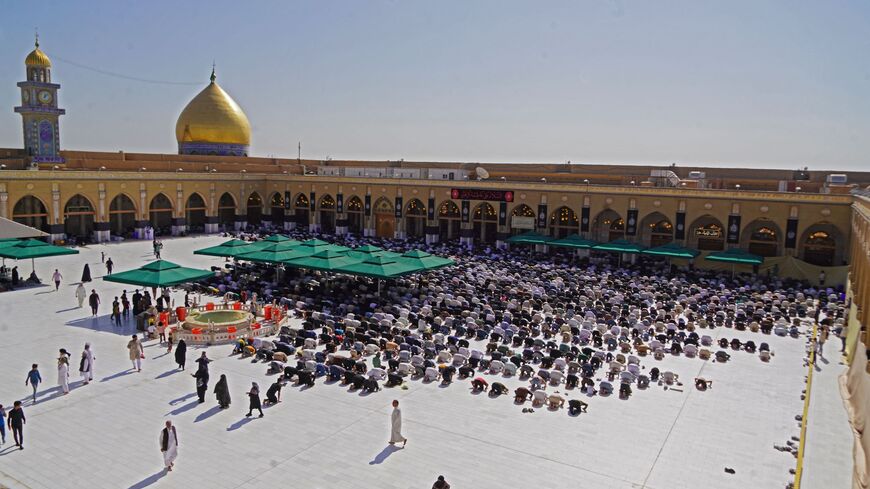 Supporters of Iraqi Shiite Muslim cleric Muqtada al-Sadr gather for Friday prayers at the Great Mosque of Kufa outside the central holy city of Najaf, on Nov. 4, 2022. - QASSEM AL-KAABI/AFP via Getty Images

Following months of silence, Iraqi Shiite cleric Muqtada al-Sadr called for his supporters to hold a unified Friday prayer today in Baghdad and a number of other cities.

The prayer was preceded by a speech written by Sadr himself, according to Sadrist Telegram channels, which distributed the text of the speech.

Sadr emphasized the necessity of organizing Friday prayers regularly, linking the prayers to political messages including patriotism, reform and combating corruption, as well as resistance against "occupation and colonialism."

Public Friday prayer sessions serve as a significant political symbol for Sadrists. When Sadr withdrew his party members from parliament in June of last year, he called for a Friday prayer among his followers. His supporters soon stormed the parliament and organized a sit-in that lasted about two months, in an attempt to prevent his Shiite rival, the Coordination Framework, from forming a government. The Coordination Framework includes Shiite groups and factions close to Iran.

Sadrists finally ended the sit-in after a bloody confrontation.

The call today seems to indicate that Sadr is making a comeback to politics, especially since his speech preceding the prayer contained strong political messages.

This comes in conjunction with reports of a split among former Prime Minister Nouri al-Maliki’s State of Law coalition, the largest bloc among the Coordination Framework with about 40 seats in parliament.

According to reports circulated in Iraqi social media accounts and confirmed to Al-Monitor by sources within the bloc, 12 members of the bloc have left to form a new political group.

Maliki is the strongest foe of Sadr among the Coordination Framework, due to the long history of hostility between them since the second term of Maliki's premiership.

Moreover, the Coordination Framework is planning to change the electoral law to a system that might benefit them and cost Sadr seats in both the provincial and parliamentary elections.