Influential Iraqi cleric Muqtada al-Sadr vowed that new elections would be held as his followers flocked to a mass prayer in the occupied parts of Baghdad’s Green Zone after 10 months of political deadlock. 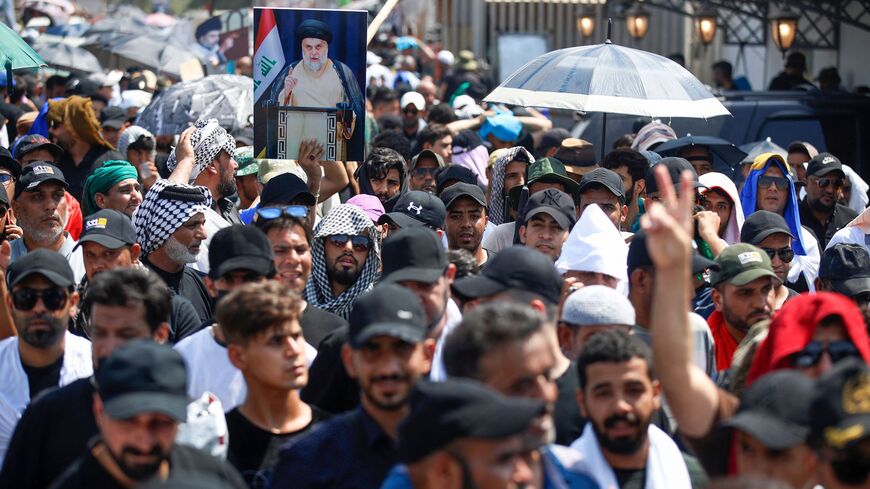 Supporters of Shiite cleric Muqtada al-Sadr gather outside the Iraqi parliament in the Green Zone in the capital Baghdad, on the seventh day of protests against the nomination of a rival Shiite faction for the position of prime minister in the heavily-guarded Green Zone, on Aug. 5, 2022. - AHMAD AL-RUBAYE/AFP via Getty Images

BAGHDAD — The heat was suffocating and the crowds were immense, blocking traffic and slowing emergency vehicles to a crawl.

And yet on Aug. 5, thousands — or hundreds of thousands — of supporters of firebrand Iraqi cleric Muqtada al-Sadr continued to make their way to an area of the heavily fortified Green Zone for Friday prayers on parched grass against the backdrop of famous and enormous crossed swords erected to symbolize a previous Iraqi strongman’s power.

Most were dressed in black for the holy month of Muharram when Shiites commemorate the martyrhood of their third imam. Many were carrying pictures of the cleric. The small number of women present were in long black abayas, many wearing face-covering niqabs despite temperatures of almost 50 degrees Celsius.

The bronze hands clutching the swords, known as the Victory Arch and symbolizing Saddam Hussein’s rule, had been modeled on those of the former Iraqi dictator. Sadr has instead long claimed to represent Iraq’s seething masses and oppressed underclass.

Widely billed as a “show of force” or a “power play” by Sadr, the mass Friday collective prayers and continuing occupation of part of the heavily fortified Green Zone have largely been peaceful. The few official Iraqi security forces around seem on good terms with the black-attired Sadr supporters tasked with security.

Where many Iraqi government buildings are located, the heavily fortified Green Zone has long been looked upon with suspicion and sometimes awe by those with little or no access to it. Politicians living within are often assumed by the lower classes to be supported by foreign powers.

On Friday, the part of the Green Zone occupied by Sadr supporters was crowded with thousands of people mostly from the lower classes. After the prayers, some climbed over walls to escape the crowd; others collapsed within the walls in the heat. A truck near tents set up outside the parliament area sprayed water on the barely moving mass trying to leave.

Some consider Sadr a cult leader; his supporters are known for having engaged in brutal killings during sectarian fighting over a decade ago and for following his orders unquestioningly. They were a driving force of the “resistance” against the “American occupation” after Hussein’s regime was toppled in 2003. Many arriving at the collective Muslim prayer on Jan. 5 were carrying white fabric to put on their shoulders, meant to symbolize shrouds and their willingness to be “martyred” for Sadr.

His bloc received the most seats in both the 2018 elections and in the October 2021 ones in Iraq. He is now seen as the most “nationalist” of Shiite leaders and a bulwark against militias linked to and believed to be following the orders of Iraq’s eastern neighbor, Iran.

Iraq’s Kurdish and Sunni parties mostly consider him a better partner for any possible future coalition than those close to the former Prime Minister Nouri al-Maliki and others deemed to be following a “foreign agenda” not benefiting the country.

Ten months after the latest parliamentary elections, Iraq’s politicians continue to squabble over power and possible alliances — with disastrous effects.

Following street protests in which dozens were injured, Sadr supporters broke into the parliament in late July and occupied the halls of decision-making. Photos circulated of them sleeping on the floors, dancing, playing video games and generally enjoying the air-conditioning. By Friday morning, the parliament building had been closed to protestors and cleaned up.

Sadr, who had ordered all of his parliament members to resign from parliament in June following the failure to form a majority government, has called for new elections.

In a public speech on Aug. 3, Sadr called for fundamental changes in Iraq's political system, demanding the removal of the political class after 2003. He also asked for the dissolution of the current parliament and another set of early elections. Sadr has rejected Muhammad Shia Sudani, the prime ministerial candidate of the Coordination Framework, a rival alliance of Shia parties — including those aligned with Iran.

Dr. Jawad al-Musawi, a parliament member from the Sadrist bloc, told Al-Monitor that the parliament protest had served to “prevent corrupt parties and losers in elections from forming a consensus government or a quota government because this type of government has greatly harmed Iraq and fostered the spread of corruption from 2003 until today.”

Musawi, who as a medical doctor has long served his community in the poverty-stricken Baghdad district of Sadr City, added that “new elections will help to effect change and amend some articles of the constitution,” with the focus on “preventing the corrupt from participating in the elections.”

He said it was important that the text of the amendments “allow the largest bloc to form a majority government clearly and quickly,” thereby “changing the entire political system” and preventing similar protracted periods without a government or budget.

Iraq’s population is fed up, with little stomach for the sort of all-out protests in late 2019 that brought down the previous elected government and resulted in hundreds killed and thousands injured.

The poor, especially, cannot afford days off work if they are lucky enough to even have a job, nor can they afford the death of breadwinners or their extended detention.

One woman from Sadr City told Al-Monitor at the Green Zone sit-in after Friday prayers that she was there “for those in jail.”

She said that her son — the only male in the family after her husband’s death two years ago and with several daughters to feed — had been arrested four months ago and was being held in overcrowded, unsanitary conditions while she now has no source of income.

“My son will be OK. He will come out. But those people are getting thrown in without any chance to come out,” she said without explaining further.

She and others around her complained about continuing joblessness, lack of electricity and the sharp disparity between the oil wealth the country is blessed with and the dire conditions in which most of its population lives.

One man Al-Monitor spoke to at the protest tents outside the parliament railed against former Prime Minister “Maliki, Asaib Ahl al-Haq, all the others” — referring to Iran-linked militias and politicians close to them.

A man named Ahmed from the Mohammedawi tribe told Al-Monitor that he was there because, even for those with educational qualifications, there are no jobs and now there is “no education” worthy of the name or other basic services available to most people in Iraq.

He and many others lamented the problem of unreliable electricity as one of their main complaints, noting that in a country so rich in natural resources and oil this should not be the case.

In Sadr City where he lives, Ahmed said that “there is electricity for two hours and then one hour without” in this period, with food spoiling easily and generators too expensive for many.

He said the people are tired of “having nothing” and knew little about politics except that the politicians make promises but then do not follow through on them.

Sadr has meanwhile claimed that there are “no alternatives” to the dissolution of the Iraqi parliament, vowing that "the old faces, regardless of affiliations, will not exist anymore” in new elections whenever they are held.