Al-Monitor traveled to Iraq’s impoverished southeast, known for drug smuggling and militia violence, to explore the continued support there for the Sadr movement. 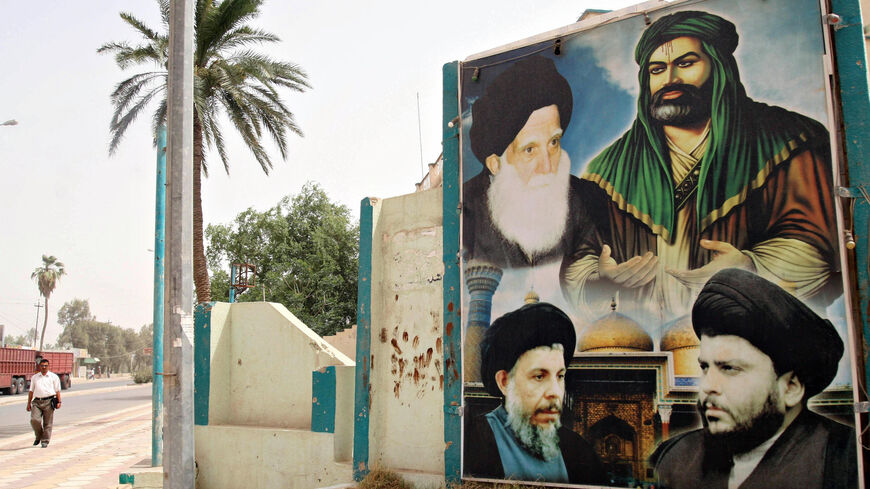 A giant mural bearing portraits of Shiite Muslim leaders including Muqtada al-Sadr (bottom R) is seen as an Iraqi pedestrian walks past a street in the southern city of Amara in Maysan province on June 17, 2008. - ESSAM AL-SUDANI/AFP via Getty Images

AMARA — Thin young men dart through the massive crowd, handing out photos of an iconic figure in Iraqi history to the men leaving Friday prayers at the central mosque in Iraq’s southeastern Maysan province.

Fewer than a dozen women entirely covered in black sit on the ground outside during the prayers. The overwhelming majority here are men, as is the case at a major football (soccer) competition that was held further south in Basra and in the halls of the central government in Baghdad to the north.

Maysan remains one of Iraq’s poorest provinces. These worshippers’ continued lack of economic means is clear, as is their wariness of outsiders.

Young men who clearly have more control of the area than the few policemen around nevertheless welcomed Al-Monitor’s female correspondent. Some of those who attended the prayers agreed to discuss the situation in the province.

The photos distributed here among the crowd were of Grand Ayatollah Sayyid Muhammad Muhammad-Sadiq al-Sadr, assassinated in 1999, who was the widely revered father of Iraq’s powerful firebrand cleric Muqtada al-Sadr.

Many of the older men streaming out of the mosque sport scars and suffer disabilities from their years of fighting in the ranks of Sadr’s Jaish al-Mahdi against the “US occupation” in the post-2003 period.

Sadr seen as a kingmaker

Muqtada is still seen as a kingmaker of sorts in Iraq but has kept a lower profile since some of the worst violence in many years in the country started on Aug. 29 last year in Baghdad’s Green Zone, where his supporters had been conducting a month-long protest.

In June, Sadr ordered all 73 parliamentarians from his bloc, the largest at that time in parliament, to resign after months of political bickering left the country without a government for what was seen as a dangerously long period.

Dozens were killed in fighting in the Green Zone in late August that ensued after Sadr announced he was leaving politics “for good.”

The night between Aug. 29 and Aug. 30 was marked by RPGs, missiles and mortars fired in Baghdad amid what sounded and looked like war in the most heavily fortified part of the city. The firefight stopped only after an Aug. 30 press conference in which Sadr demanded his followers leave the Green Zone within 60 minutes or he would “wash his hands of them.”

The candidate for prime minister strongly opposed by Sadr at that time, Mohammed Shia al-Sudani, was sworn in weeks later. Sudani had previously held several government positions in this southeastern province.

Multiple fighters answering to Sadr have been assassinated in suspicious circumstances over the past year in Maysan, which has gained a reputation in recent years for drug smuggling along its lengthy border with Iran as well as deadly tribal and militia disputes.

Tensions and conflict between Sadr’s supporters and those more closely linked to Iran have been frequent for years. The situation escalated sharply amid massive 2019 protests across central and southern Iraq that brought down the government at that time.

Many of the initial protesters in 2019 — and those killed — were from Baghdad’s impoverished northeastern district known as Sadr City, named after Muqtada’s father and another wellspring of support for his son. Many people from Maysan have migrated to this area in recent decades in search of work.

Residents pointed out to Al-Monitor heavily damaged and burned-out carcasses of headquarters of armed factions linked to the Sadr’s rivals in the political alliance known as the Coordination Framework, including one of Asaib Al al-Haq, in different areas of Maysan’s provincial capital, Amara.

The provincial headquarters of the Iran-linked armed factions were attacked after the 2019 protests began and have remained shut in the city since. However, many of their supporters remain in the city with some rumored to own multiple businesses in more affluent parts of the city.

The elder Sadr, whose face still adorns many billboards throughout Iraq over 20 years after his assassination, was known for defying President Saddam Hussein and using Friday prayers during the 1990s as a tool for networking and gathering strength to oppose the government. There are some indications that the younger Sadr, having announced his withdrawal repeatedly from politics but still one of the most powerful figures in Iraq, may seek to do the same, including here.

Despite relatively scant media attention, apart from occasional news of drug busts, the impoverished province of Maysan plays an outsized influence on what happens in the capital as well.

The current governor of the province, Ali Dawai Lazem, is closely linked to Sadr. He was mooted as a possible Sadr-backed candidate for the role of prime minister following the 2018 elections and has been in control of this southeastern province for over a decade. He took over the position from Sudani, who was then governor of Maysan in 2010.

When Sudani was sworn in as prime minister of Iraq in October of last year, his strongest backers were the Iran-linked Coordination Framework.

He had previously held a number of positions in Maysan, including mayor of Amara starting in 2004 and governor of Maysan between 2009 and 2010.

Sadrist alliances received the largest number of votes in Iraq’s last two elections, in May 2018 and in October 2021. Both times, however, the prime minister eventually sworn in was not the choice of the Sadrist movement.

Concerns have risen in recent months about the cross-border movement of funds, weapons and drugs in Maysan, with some alleging that Sadr’s rivals — Iran-linked armed factions and political parties linked to them — play a part in these lucrative trades.

One of the black-turbaned supporters of Sadr who had been present during the Friday prayers but who asked that his name not be published railed against what he implied was involvement in the drug trade by some of those taking part in the government. He urged better border control, saying that jailing drug users is “useless” if the aim was to stop the movement into the country of drugs and weapons.

Sadr as a nationalist figure

Another man at the mosque claimed those in the Sadrist movement are “all willing to sacrifice themselves” for Sadr and the greater good, as symbolized by white “shrouds” often worn across the shoulders of those attending communal prayers as well as by Sadrist parliamentarians prior to resigning from parliament last year.

One of the most frequent criticisms of the Sadrist movement is that its followers resemble a cult, though the fact that his supporters mostly tend to follow his orders unquestioningly has at times been seen as serving a useful purpose, such as when he was able to halt the fighting in August of last year.

Al-Monitor also spoke to a former unit commander of Jaish al-Mahdi who said that he had been fighting under Sadr since 2004: initially against the “US occupation forces” and later in the ranks of Saraya al-Salam against the Islamic State.

He claimed that the main difference between fighters answering to Sadr and those of armed groups close to political parties within the Coordination Framework is that “other groups work on behalf of foreign countries,” while the Sadr movement instead works for “Iraqi sovereignty.”

“Those factions receive funding and those giving them the money want something in return,” he said, alluding to Iran as the country providing framework-linked factions with funding without directly mentioning it.

Sadr has long held a more nationalist stance than factions linked to Iran’s Islamic Revolutionary Guards Corps. He has repeatedly over the years spoken out against Iraqi armed groups crossing into Syria and fighting on behalf of the Iran-led, cross-border “resistance” movement alongside the Syrian government and against armed opposition factions there.

On who holds the most power in Maysan, the former Jaish al-Mahdi unit commander pointed to neither the young men watching over the streets nor those with the most weapons as proof but instead at votes.

“It’s clear, isn’t it? Look at the last elections,” he said. “The Sadrist movement. Of course.”